The job-hoppers' guide: what's in it for you?

here are two ways to grow the talent pool in your company: coach it or poach it.

You achieve the first by hiring bright young men and women who earnestly seek a challenging career with your company. 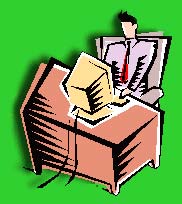 The second involves cutting short the careers of bright young (and not-so-young) men and women in the neighbouring company, by offering a greater challenge at your own.

This is that time of year when both -- coaching and poaching -- are most rampant.

In May and June, waves of fresh B-School and engineering graduates take up their campus placement offers.

In May and June, immediately post-increments, waves of seasoned employees also leave to graze in greener pastures.

Mangoes are seasonal. And so, to an extent, is job-hopping.

Reasons range from Bacchon ki padhai na affect ho [let the childrens' education not be affected], if you need to relocate, to the strategic use of the increment letter as a bargaining tool.

You may have made up your mind to quit a while ago. But by hanging on two months more, you can easily negotiate a higher offer.

But there is a third, and more disturbing, reason for employees deciding to exit: lousy increments.

Rather, bhala usko mere se achcha increment kaise mila [How did s/he get a better increment]?

You may, as an HR type, argue that a poor appraisal should not come as a surprise since the Key Result Areas have been jointly identified at the beginning of the year and reviewed midway.

Hence, as an employee, you and you alone are fully responsible for failing to deliver.

But it is the rare one who accepts a less-than-exceptional appraisal report with grace.

Take scenario at company X, a large and well known bank. Increment announcements are just in. All, except the few who have received Grade 1 (the highest) ratings, are in a state of shock and mourning.

Assorted references to chamchas and a*&%-licking sum up the general response to a poor performance appraisal.

The company is no mai-baap, whose reprimand is to be taken meekly with an 'I'll try harder next year, sir'.

This is no school report card. In the jobs-to-be-had-for-the-asking environment, there are options. Plenty of them.And people do not hesitate to seek them out and seize them.

When I first learnt of  the concept of 'performance appraisal' at B-School, I thought it was extremely clever and scientific. But managing people and their expectations, I now realise, is more of an art than a science.

The 'Value Creation Cycle', we learn, is a tool which works like a scythe -- weeding out the big chunk of worst performers every year.

It was first introduced at GE by Jack Welch, as the 'Vitality Curve'. A number of Indian companies from Wipro to ICICI Bank and Cognizant Technologies have embraced the idea.

At GE, there are three categories:

At Satyam, there are five performance categories, while ICICI Bank has a 6-point rating scale, where 'not more than 5%' are allowed to be categorised as excellent; while 15% are slotted 'unacceptable' perfomers.

All companies hasten to add that underperformers are given a year to pull their socks up. My point is, how many of these demoralised folks are going to bother doing that? Most will choose to find a job elsewhere.

If that is the company's intention: to signal to an employee that s/he should leave, then well and good.

But it is not just the worst perfomers who end up prospecting. The middle 70% -- or the bulk of your workforce -- is also dissatisfied. And quite likely to be looking for options.

Can that really be a good thing?

The Power of Human Potential

A poor performance may be due to reasons not entirely in the individual's hands. Because, more often than not, the same person -- in a different work environment or work profile or simply with a more empowering boss -- can work wonders.

Which is why, often, rivals and start-ups are willing to take a calculated risk and hire people who they know are not so-called top performers.

In that sense, a performance appraisal can never be taken as 'absolute' benchmark  of competency. It is company-specific.

In his new book, Winning,  Jack Welch discusses at length how to find the right job. And, he says, it is not necessarily going to be your first

So an employee seeking alternate options is not a case of 'sour grapes', but is actually justified. The company you are quitting may be just a pit stop on your career track. The adrenaline will flow elsewhere.

The term poaching implies being involuntarily trapped, in the traditional sense of the term.

But poaching, in the corporate jungle, is quite another story.

Yes, there are certain times in the life of an industry when things go boom. If five new airlines or three newspapers are launched all of a sudden, the new players will train their guns on the existing market leaders, and dangle enough carrots to tempt their bunnies away.

But let us not overlook the fact that a large number of the 'poached' actually seek out the noose. The junior to middle management types do so primarily through online job sites.

Take the example of X. Long after securing a job she is fairly happy with, X has not deleted her CV from half a dozen popular job sites. She claims it is so she can keep track of the market through the various job alerts which keep coming into her inbox.

For the middle to senior management types circulating one's CV to a headhunter is the preferred option. It is a more dignified way to look around for 'options' than scanning newspapers or job sites. Besides, it is believed -- and perhaps rightly so -- that the best jobs are never advertised.

Y is an IIM grad who quit his job in a huff and has spent the last six months looking for a suitable new place to join. Since he had a specialised profile, it took more than three months to even get interview calls from the kind of companies he wanted to work for.

Today, a month into a job and role he was initially overjoyed with, calls from headhunters are still coming in. And he is still meeting some of  the prospective suitors, placing 'impossible' demands (like, Double my current salary and give me a flat on Worli Seaface, Mumbai), just for kicks.

Meanwhile, Z, a star perfomer at a large multinational company, is also getting calls from a headhunter. And although  not really interested, he decides to go over and have a friendly chat. "No harm in checking out the options."

Ultimately, the poaching ritual  whether voluntarily or involuntary  is all about feeling 'wanted'. The more companies that want to hire you, the more the ego massage.

If you decide to stay loyal to your company, you know you are doing so of your own free will. Not because no one else will have you.

But the reason people stick on, despite getting daily job alerts and mouthwatering offers from headhunters, often has nothing to do with morale or motivation.

It has everything to do with a primaeval human emotion: fear.

Sure, there are jobs aplenty, but there are certain highly effective habits of successful job-hopping. The first one being, thou shalt not hop too often.

X cannot consider the interview calls coming into her inbox because she is already in her third job in less than two years. She knows that unless she sticks on for at least a year at this one, it will look terrible on her CV.

Besides, she is older and wiser now than she was fresh out of B-School. There's no 'perfect' job out there and no real shortcuts when it comes to climbing the corporate ladder. You just gotta hang in there long enough.

Y is in a dilemma. One of the companies he met, just for kicks, has actually agreed to his outrageous demands. Now what? Now, nothing. The job is far too challenging, far too risky. The fear of failure outweighs the rewards on the table.

Y decides to stay put in his current job which pays less, but demands less, too. No travelling 15-days-a-month, no working Sundays. Life is good.

People may  stay out of fear, but they always move on the wings of hope. Am I achieving my full potential here? Still getting a kick out of my job?

Maybe not. Maybe it is time to move on.

That's what Z, the guy who thought he would check out his options is doing. The meeting with the headhunter made him realise that, although he is doing extremely well, he is not as excited about his work as he once used to be.

This is a chance to move to another level. And, yes, the money is excellent.

A new job is the tug of new hope, new love and new life all rolled into one.

Can any company, realistically, hope to fight that?