Sign in  |  Create a Rediffmail account
Rediff.com  » Getahead » Doctor or engineer? Which has more money and demand?

Doctor or engineer? Which has more money and demand? 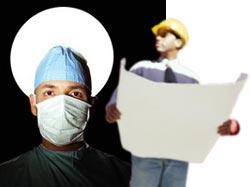 The first kind is becoming a rare, dwindling species, serving in the few large public hospitals which mostly treat the poor and needy.

The stipend that interns earn at these hospitals makes a part time job at McDonald's appear lucrative.

So, yes, the 'noble profession' hangover remains a key motivator for those seeking careers in medicine.

A few years down the line, cynicism sets in.

We, the 'brightest and the best' who made it to a medical college, we deserve better.

Medicine and engineering have long been the two 'most wanted' careers for middle class India.

Slowly and steadily, though, engineering seems to be gaining ground. Four years of engineering study at a decent college fetches you a well-paying job.

Or one can choose to go abroad for further studies with a good possibility of financial aid and a quick job.

Five years of basic medical study -- even from the best institution -- gets you nowhere.

After these 10 to 11 years of study, the future is still uncertain.

The irony is that the demand for a doctor's service is, by definition, ever increasing. Especially in a populous country like ours.

Setting up practice, though, is not easy because in this profession, reputation brings in clients.

Moreover, reputations take years to build, especially when senior doctors are too insecure to promote junior talent and seldom, if ever, retire!

Medicine, thus, is not only a difficult profession, but a lonely one.

Many, many doctors rarely take vacations, afraid of losing patients to rivals.

Many others work long, stressful hours not just because it is their duty to attend to the sick but because consulting at three different hospitals and running one's own clinic/s is the only way to build a name.

There is also the system of General Practitioners referring patients to particular specialists and labs for a 'kickback'. Newly minted doctors may recoil at the thought, but seniors see it as a standard (only borderline unethical) practice.

More troubling are the doctors who order unnecessary tests, prolong hospital stays and generally prove themselves unworthy of the patient's trust.

These are the rotten eggs that exist in every profession. Except, here, the guilt is compounded by the nature of the work.

So, like I said, these are the dudes who see doctori as just another job which involves prescribing medication.

Between the 'excessive dedication' and 'excessive medication' lot lie the majority of doctors, trying to balance the conflicts of the profession.

To serve without losing one's humanity, yet keep a distance in order to preserve one's sanity. To make a good living, yet resist the temptation to make an indecent one.

Part of the problem is that every doctor is competing for the low-hanging fruit, ie the well heeled patient.

The irony is, there is a huge demand for even ordinary MBBS graduates, but in areas where doctors fear to tread.

And I am not talking about rural Orissa.

Drivers, maids, peons in Mumbai's slums -- they all pay good money -- but to quacks who inject them with saline solution for common colds.

The Brihanmumbai Municipal Corporation recently identified 250 such frauds operating in Mumbai alone. And I am pretty sure that with the sheer volume of patients they treat, the money they make is not inconsiderable.

But how many medical graduates will ever consider such a location to set up a practice?

Who will make more money?

Coming back to the career question: medicine versus engineering, I think there is no question that in the long run, good doctors will always be in demand (and make money).

The question a student needs to answer is: do I have the required patience?

Both PMT and JEE are difficult exams, but making it to IITs or other prestigious engineering colleges means no more worries.

Medical students, on the other hand, must again compete for scarce PG seats. And consider alternative options, if they fail to get one.

These options include 'going abroad' through one of two routes:

a. Appear for United States Medical Licensing Exam, a necessary prerequisite for Indian medical graduates seeking a residency post in that country. After clearing USMLE steps 1 and 2, you need to actually go to the US and give the Clinical Skills Assessment examination, where you have to examine mock patients in a stipulated period of time.

The entire process is long, difficult and expensive (running into a few lakhs).

Also, getting a residency post is not easy or certain.

A similar exam, PLAB, exists for those wishing to practice in the United Kingdom.

b. Give the GRE and then take up MS/ Ph D in subjects like Public Health, Genetics, etc.

This means research/ academics as a career, giving up clinical practice altogether.

Some are okay with that. Or maybe they are just resigned to their fate.

The GRE route of 'going abroad' seems to be gaining popularity. It is easier both to get there and get a job.

And, what do you know, doctors are even aspiring for MBA courses! Although the number is tiny, it is happening.

1% of IIM Ahmedabad's class of 2006 lists its background as 'medicine'. That is just about three students, but it was unheard of until recently.

But why not? If 17-year olds who joined engineering can later realise this isn't what they want to do for the rest of their lives, the 17-year olds who similarly opted for medicine should be free to make the same choice.

Somehow, that isn't so. Clinical research, it is being said, may be the next big thing. Especially if India can convince the West to outsource its clinical trials here.

Hospital management courses are becoming popular. Yet, neither is attracting medical graduates in a big way.

In that sense, unlike any other graduates, doctors still have a great deal of pride in their skills. They also give it up less easily than engineer/ MBAs who will happily sell shampoos or manage hedge funds, with no love lost for their original subjects.

Go ahead and fleece us MBAs. God knows, we somewhat deserve it!