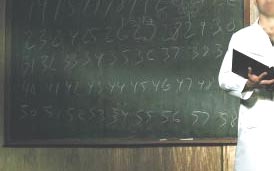 In the first category lie those who slogged for months, mastering Vedic Mathematics shortcuts and agonising over their performance in SIM CATs.

They prepared all they could. And then some more. Only to find the rules of the game cruelly altered.

Hence the relief of the second camp, writ large on the faces of students who knew they hadn't 'practised enough'.

Yes, they had solved mock papers, but given the pressures of work -- and play -- still had a mountain of coaching class material lying untouched. They had arrived at the exam hall unsure if they would 'peak' or squeak past the competition.

For them -- and all those who believe that CAT had become a bit too 'crackable' via coaching -- the paper came as a pleasant surprise.

In its altered format, CAT 2004 offered a level playing field. Presence of mind scored over familiarity with pattern. Dealing with uncertainty took the 'well prepared' well outside the comfort zone.

That is the way it should be.

Only, it gets harder and harder for the creators of the test to keep this 'mystique'. Year after year, coaching classes scrutinise the question paper in minute detail and extrapolate it into hundreds of mock CATs.

To stay a step or two ahead of this 'practice makes perfect' premise is the challenge the CAT question setters have finally responded to.

The idea of a paper containing questions with varying degrees of difficulty is, of course, not unique. Both GRE and GMAT follow a similar line of thinking. Being computer-based tests, they serve questions in an ascending order of difficulty -- if you answer the easy ones, you go on to the tougher ones.

Those who answer the tougher questions score higher overall, naturally.

The logistics involved in holding a simultaneous computer-based test for 1,50,000 geographically dispersed applicants being what they are (horrendous!), I foresee CAT remaining an HB pencil-and-paper based test for some time to come.

And that's absolutely fine. What was broken has been fixed, what isn't need not be tampered with.

India's population is growing, but surely not at such an alarming rate!

No, the rapid explosion of interest in MBA entrance exams is a direct result of information being accessible to all and sundry via the Internet and satellite television. The gap between the metros and mofussils shrank -- in inspiration and aspiration. And the MBA coaching class industry rushed in to sell the stuff dreams are made of.

A huge industry -- mostly headed and fuelled by IIM alumni -- has convinced lakhs of students that if they practise long enough and hard enough, they stand a chance of making it. It is a myth that classes actively propagate and one that students choose to believe.

Fact is, even if the odd institute honestly tells a student that his/ her chances of clearing CAT are low, 99 percent would still enroll. After all, CAT is the 'mother' of all exams. Iska preparation ho gaya toh baaki to samjho ho hi gaya [If one is prepared for this, one need not prepare for the other competitive exams].

Besides, over 50 other institutes now take in students based on CAT scores, so even a moderate score might get one into a decent non-IIM MBA programme.

God helps those who help themselves

I have nothing against coaching (yes, I did take up a correspondence course and gleefuly passed on the material to two siblings who also cleared CAT :))

But the point is, God helps only those who help themselves. And so it is with coaching.

Practising shortcuts and solving mock papers can give those with the basic ability an added edge. It can turn a good performer into an excellent one and maybe change the fortunes of the borderline candidate. But there is no way it can phenomenally improve your basic verbal, quantitative and reasoning skills.

Qualities which, frankly, are lacking in a large number of CAT aspirants.

The number of e-mails I receive, with incredibly poor English, asking for advice on 'how to make it to IIMs' would be amusing, if it weren't so sad. A couple of 100 percent real (unedited) samples:

"I am engineering student , what is the next step to select for my further studies.Is it better to continue my engineering studie s or i go to business studies which is the beter one"

"I'M EXPECTING SOME SKILLFUL AND EXPERIENCED KNOWLEDGE FROM U WHERE TO ENROLL FOR COACHING ETC. AND WHT MY REGULAR EXERCISE SHOULD BE.."

Is there any real hope for such aspirants?

Perhaps they will make it to a C-grade MBA school somewhere. But then, lack of communication skills would hamper them wherever they go in life.

I don't doubt these individuals have some unique passion or potential. But clearing the CAT exam is clearly not one of them.

The thing is, 90 percent of the folks who clear CAT would have done so with or without coaching. Because they possess the kind of IQ CAT tests.

They may be deficient in other kinds of intelligence (my spatial ability, manual dexterity, sense of direction, ability to remember faces, emotional intelligence all suck).

But, apparently, all that doesn't count for much if you are an aspiring manager.

The coaching craze operates on the 'tipping point' principle. Once it has attracted a large enough mass of people (of which a reasonably impressive number are successful), it becomes the 'done' thing.

Take the Class X examinations. When I gave mine in the mid-1980s, coaching was unheard of.

Now, NOT taking coaching is unheard of.

I'll bet the same folks who would have topped school leaving exams without coaching are now topping with the help of coaching. The extra slog has probably resulted in a few more marks, unnecessarily raising the bar that much higher.

Coaching has taken over the education scene to the extent that the more successful ones can -- and do, in fact -- dictate terms.

Take the phenomenal success of the Kota-based Bansal Classes (in case you're wondering, we are not related :))

No doubt Bansal adds value to its students' preparation. But, over the years, it becomes a virtuous cycle in operation.

Founder V K Bansal -- a mechanical engineer from Benaras University -- started giving private tuitions when health problems forced him to give up his regular job.

The first few years resulted in modest success. Four students made it to IIT in 1988, a figure that went up to 22 in 1994. But thereafter, it has been a phenomenal result indeed.

Based on its early success, and purely through word of mouth, Bansal began attracting hundreds of students. Now here lies the genius of the operation: By screening wannabes through its own rigorous entrance test, Bansal ensures it gets only the creme de la creme of Class X passouts.

Small wonder then that Bansal boasts of a 50 percent success rate. It is the old cats and dogs theory in operation again. Take in the cats, and groom them to be supercats.

Further, those who top the Bansal entrance exam are given more intensive coaching and taught by the best professors. Those in less favoured batches can, however, work their way into the 'A' team by their performance in the omnipresent weekly tests.

But the real clincher for many young aspirants is the fact that, in Kota, you can spend all your time and energy preparing for JEE.

The classes have a 'setting' with the local schools ensuring you stay enrolled without the jhanjhat of attendance, classwork, etc.

That is why is my cousin, a topper at the Class X CBSE examination, has chosen to go the Bansal way. Perhaps he would have made it anyway. But the stakes are so high, no one wants to take chances.

Bansal's case, though, is unusual. It actually turns away students who don't make the grade (of the 8,000-odd who apply, less than 25 percent are taken in).

To cater to these 'rejects', a whole host of other classes have sprung up all over Kota. Who knows, perhaps the very fact that they didn't make it to Bansal propels some of the wannabes to struggle harder and prove themselves at JEE!

On the other hand, a large number will eke out two (or more) years, fumbling towards a goal that is not within their intellectual grasp. Or their inherent interest. But they will do it simply because that's what 'everyone is doing'.

And it is easier to say, 'Look, I tried,' than outright reject your parents' long cherished dreams.

Cosmetics is the business of selling 'hope in a jar'.

Coaching is pretty much the same thing, except in an overcrowded little classroom.

Hope is a wonderful thing. I just wish we had -- in this country -- many more worthy, life-changing academic destinations to hope for.