Got the part-time MBA blues? 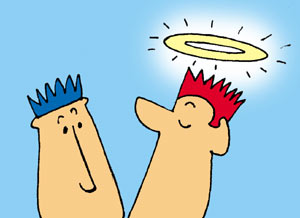 The first kind are devoted to their course full-time. Getting this far involved a fairly long and hard battle (entrance tests, interviews, GDs!) against thousands of other suitors. Hence the object of their desire (the coveted MBA seat) is placed on a pedestal and accorded due respect in society.

The second kind of student is already married -- to a full-time job. Yet, somehow, this individual steals precious time and energy for the course -- evening, weekends.

Like most extramarital activities, this one too arises out of certain unfulfilled needs and desires. Unlike a real wife, the Boss can't forbid the pursuit of this passion, but can and often does frown upon it. Making life all the more complicated.

The sad truth about part-time MBAs

It's sad but true -- a part-time MBA just does not command the same status as a full-time one in this country. A host of extremely respected institutes offer one-, two- and three-year part-time MBA diplomas and degrees. Yet, the students who opt for these courses do not emerge with the same halo as those who take up the two-year full-time post-graduate programmes.

The first cruel fact you have to accept if you're thinking of a part-time MBA is this: it is unlikely to swiftly and painlessly enhance your immediate job prospects. There is no lucrative placement offer waiting for you, like the proverbial 'pot of gold 'at the end of the rainbow. And this is true, even at the brand name institutes.

The B-schools justify the lack of placement opportunities by pointing out that those pursuing the part-time MBA already have jobs. In fact, the pre-requisite for practically all part-time MBA courses is two-three years of work experience, preferably in an executive or supervisory capacity. Part-time MBAs are thus positioned as career-enhancement programmes designed to make the participant more effective in his or her current organisation.

The truth, however, is that the individual who chooses to do the part-time MBA is essentially seeking better prospects. 'Better' may variously defined as a shift from a smaller company to a larger one, or from software to marketing. Essentially, there is a sense of stagnation in the current workplace/ job function and an MBA appears to be the 'way out'.

The candidate is hoping that with the part-time MBA he gets to have his cake and eat it too. Instead of enrolling for a full-time course and forgoing two years of salary, (as well as shelling out at least Rs 4-5 lakhs as fees), why not do a part-time MBA? Especially when most institutes claim it is equivalent to the regular MBA in terms of coverage and curriculum. Well, the logic is impeccable but things don't quite work that way.

That's not to say a part-time programme adds no value. But do be realistic. You are never really going to be considered 'at par' with the full-time grads so don't expect investment banks or the Hindustan Levers of the world to welcome you on board because you've got FMS or JBIMS on your resume. The unstated assumption you will encounter: 'Only folks who couldn't make it to the (more competitive) full-time MBA join the part-time course.'

The 'children of a lesser God' theory may also manifest itself at alumni meets. It's a different thing that any Indian who attends even a one-month program at Harvard refers to himself as a Harvard 'graduate' on his biodata!

Personally, I think that if companies actually picked up part-timers they might find them to be more dedicated and a lot more street smart than regular MBA graduates. And be pleasantly surprised by the absence of 'we are the cat's whiskers' vibes. But, until they start taking that chance, the part-timer will have to view the MBA primarily as a stepping stone in the quest for self development. And the pursuit of knowledge.

What is a 'good' part-time MBA?

Separate rankings of part-time MBA programmes in India are unavailable. But I'd say generally, part-time programmes follow the same pecking order as the full-time ones. So, in Mumbai it's Bajaj, followed by S P Jain, NMIMS, Welingkar, Somaiya, Chetana (in that order). In Delhi, FMS, MDI and IIFT would be your best bets. Similarly, Loyola (Chennai), IIM B (Bangalore), IIM C (Kolkata) and so on.

This isn't a comprehensive listing. The general criteria is -- try and hitch your wagon onto a brand name school. Not only are their courses more structured, but the participants are generally more serious. And the 'chhaapa' [stamp] will add value to your CV in the long run.

The second criteria to look for is selectivity. Programmes which are more choosy (as opposed to admitting everybody who applies!) are always more respected. At JBIMS, for example, 1,000-odd students compete for the 60 available seats in the three-year part-time Masters in Information Management course. Of course, if that fact (and the course itself) was better publicised, it would boost the brand image of the part-time MBA significantly!

The next question you have to ask is -- how high is your motivation and energy level? The three-year part-time programme leading to a degree is the most rigorous and thus (generally) adds the most value. But can you spare two-three hours every evening and/ or weekends (that's just the classroom bit -- there are projects and presentations too)? Not everyone can handle the stress!

Tip: Do make sure the location and timings make sense to you. Or you'll end up missing/ reaching late for a lot of the classes.

Here, you get a mix of distance and campus learning. XIM B's three-year programme requires participants to reside in the campus for 15 days at a time, thrice a year. The IIM Indore course is spread over 18 months and you will have to schedule study visits at the beginning and end of each of the six terms.

The downside: You pay almost as much as the full-timers (IIM Indore Exec PGP costs you a cool Rs 4 lakhs) but, no, you don't get to participate in the campus placements.

An option worth looking into is the satellite-aided MBA. Thanks to V SAT technology, you can attend real time, interactive classes at a DirecWay centre in your city. Classes are beamed from IIM Kozhikode, IIM Kolkata, XLRI Jamshedpur and IIFT Delhi among others. Durations vary from 10-18 months and involve campus visits. Expect to shell out between Rs 75,000 to Rs 1.5 lakhs, depending on the course and the institute.

You may be a bit taken aback by the fact that you get only a 'certificate' from IIM C, K and XLRI but there is a valid reason for it. The two-year full-time 'MBA' they award is a diploma!

If none of the above appeal to you, there are plenty of 6-12 month diplomas offered by dozens of chhotu-motu B-schools. Many of these are quite 'flexible' when it comes to exams, projects and presentations. You won't have to slog that hard but you won't learn (or add much value) either. So I'd definitely be wary of shelling out big money (Rs 30-40,000 per semester kind of fees) for an 'additional qualification' that won't be taken seriously.

Some companies actually 'go the distance' and sponsor their employees' MBA. In fact, certain institutes such as FMS Delhi take in only sponsored candidates while S P Jain prefers them, as the course is designed in a manner which requires a lot of organisational support and input. At the very least, many part-time MBAs require a 'no objection' certificate from employers!

One industry that's certainly not objecting (rather, encouraging!) is the software sector. In fact, IIM Bangalore's three-year PGP SEM (part-time post-graduate programme in Software Enterprise Management) has been specially developed, in conjunction with industry, to cater to this need.

The only downside to doing a sponsored MBA is that some companies ask you to sign a bond. It's only fair from the employer's point of view but can be a bummer if you do feel the urge to 'shop around' later.

In terms of 'rewards', there are three distinct possibilities once you complete your course:

a) Your current company is enthusiastic about your enhanced skills.

If your MBA is employer-sponsored, this is a given. You'll be seen as an investment that is bearing fruit! Improved salary, designation and a new role in the company is what you can look forward to.

b) Your current company is indifferent.

It could be your company doesn't give a damn or, perhaps the people who matter just haven't noticed. Be prepared to 'sell' yourself. If your MBA has really added value, it should soon be evident in your performance. Hopefully leading to the 'break' you were looking for.

A radical shift to a whole new sector is possible, though rare. A lateral jump in the industry where you actually have experience is more likely. Wondering where to begin your search? Your own classmates -- working at different companies -- could be a great source for leads.

How does a part-time MBA help?

In fact, the network of professional contacts you will establish is as (or even more valuable!) than the theories and concepts you learn. All of which should ultimately help you 'see the big picture' or what's driving the business as a whole. It's best not to expect toooo much, though. After years of actual experience, the formal study of management is not going to throw up too many of those 'a-ha' moments. If anything, part-timers might find what they study to be too theoretical and removed from reality!

So the one most important thing the programme will do is get rid of the awe with which you might currently be viewing MBAs in your company. In fact your whole 'paradigm' will shift as you 'leverage' your own 'core competency' in spouting management jargon.

On a final note, the divide between full-time and part-time is something like the erstwhile Berlin Wall. The day it is brought down (and eventually, I believe it will!), the part-time student will look the full-timer in the eye.

And -- to borrow a famous phrase once uttered by John F Kennedy -- declare with justified pride, "Ich bin ein MBA".