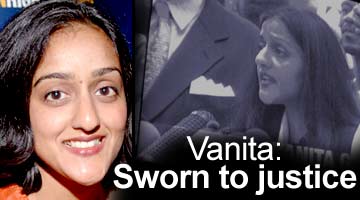 In the late 1970s, a child aged five was with her family in a restaurant Britain when some skinheads walked in.

The taunts began -- 'Go home Pakis!' the group yelled at the peacefully dining family. When the slurs were ignored, other ethnic slurs followed. The group threw French fries and other edibles at the family.

Finally, in disgust, the parents, grandmother and child left the restaurant. The child was too young to take in the implications of what she had seen, heard and experienced.

Years passed. The child -- Vanita Gupta -- grew up, and went to New York University School of Law. Among her mentors was NYU Law Professor Randy Hertz, a top-notch lawyer with a passion for juvenile justice and criminal justice issues.

She did two clinics, one with the NAACP Legal Defense and Education Fund, focusing on defending indigents on death row, and another with the Juvenile Rights Division of the Legal Aid Society, where she worked with children charged with crimes.

The experiences shaped her, and taught her two important lessons -- there was much that was wrong with the criminal justice system in the US and someone had to do something about it.

Rather than parlay her law degree into employment with a top firm, she applied for and obtained a Soros Justice Fellowship, which after graduation permitted her to work with the LDF.

In October 1999, she chanced on a documentary by the William Kunstler Fund, about a 1999 drug bust in the sleepy town of Tulia, Swisher County, Texas. What she saw -- and later described as unbelievable -- meshed with the t childhood experience in Britain. Racism, she realized, was one of the greatest problems besetting the criminal justice system in the US.

Gupta, 28, and at the time months out of law school, decided to travel down to Tulia to research the case. July 23, 1999, the Tulia police arrested 46 Blacks -- 10 percent of the African-American population of 5,117-strong Tulia -- on a drug bust.

A White jury, relying on the unsupported word of White police officer Tom Coleman who claimed to have carried out a single-handed, two-year sting operation, found the defendants guilty of drug dealing. The lives of the 46 defendants seemed, at the time, effectively over.

Gupta met local civil rights attorney Jeff Blackburn, who had represented some defendants. She also met with families of other defendants, and copied all relevant documents. In five days, she accumulated so much by way of documentation that she had to go to the local Wal-Mart to buy a suitcase to carry it back to New York.

She spent a month immersing herself in all aspects of the case, reviewing the information, examining the evidence, and growing progressively concerned. "It was shocking," Gupta told this correspondent in an earlier interview, "to see that something like this could happen in 1999."

Time, she realized, was running out. Petitions had to be filed, ahead of a rapidly approaching deadline, to protect the right of the defendants to appeal to the federal court.

Realizing this was too big to risk a lone crusade, she recruited over 30 attorneys from high profile legal firms to help fight the case -- and if there was any incongruity in a freshman law grad building, and directing, a team of high profile lawyers, Gupta was unaware of it. 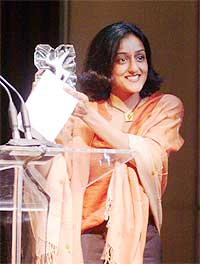 She admits she was inexperienced -- but what went in her favor was that as a result of her initial fact finding trip to Tulia, she got so immersed in the case's facts, and so conversant with the legal arguments, that the other lawyers on the team, all more experienced than her, had to depend on her for important information and inputs.

"Basically," Gupta said, "the case had been built around the testimony of the police officer (Coleman) who had been suspended from work and who had been rejected by at least three law enforcement agencies before he got this one (in Tulia)."

As Gupta spearheaded the defense, the Tulia case rapidly gained national momentum as circumstances of the drug deals and the manner of gathering of evidence came out in the open. In one instance, Coleman claimed that during his sting operation, he had taken notes on his leg -- the reason given in court for his not being able to produce the notes as evidence.

"In effect, it was the defendant's word against his. The demographics of Tulia are such that you could get away with a jury that didn't have representation from the African-American community," Gupta recalled.

Gupta's involvement with the South went back to law school at Yale, where she worked on death penalty cases through the LDF. "The criminal justice system presents the most urgent civil rights issues and concerns in the country today. Tulia represented all that is wrong with the system today," she said. "It is replete with racial bias, and is often a corrupted system with too many people going to prison for something they haven't done or due to bad policy."

She was not alone in feeling that way. She was, however, almost unique in feeling a fierce determination to fight the system, to bring justice where none existed.

"The case was an acknowledgement that the system is not working. It gives us hope about the work we do and in even hard times, a struggle in necessary as you can make a huge difference."

The fight was not easy, but it helped, she says, that her family -- mother Kamla, and father Raj Gupta, chairman and CEO, Rohm and Haas -- was supportive. Initially, Gupta recalls, her parents were worried about her going alone to Tulia, especially post 9/11.

"They were concerned, me being a South Asian woman and going to a place like that. But once I got there, the defendants' families opened their homes and brought out everything to help. A few White residents who were very distressed at what had happened helped me."

Gupta confesses that she felt initial apprehension, especially about going to Tulia as a young, inexperienced attorney and a person of color. "The feeling quickly evaporated once I got there," she recalled. "The need for assistance was too great to let appearances and age come in the way."

Also see: Pictures of the event

Sonah Shah is India Abroad Person of the Year 2003