Sign in  |  Create a Rediffmail account
Rediff.com  » News » Sonal Shah is the India Abroad Person of the Year 2003

Sonal Shah is the India Abroad Person of the Year 2003

Sonal Shah, 35, founder of Indicorps, was voted India Abroad Person of the Year 2003 by a distinguished nine-member jury, headed by Iowa Congresswoman Swati Dandekar, from 186 nominations sent in by readers of India Abroad and rediff.com. 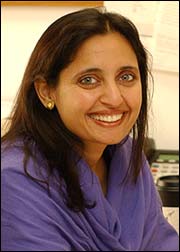 Indicorps, founded in 2001 by Shah and her siblings, Roopal and Anand, is a non-profit organisation that helps young Indian-Americans reconnect with their heritage by providing them with an opportunity to spend time in India doing community work at grass roots level.

"Most people look to give back to the community something they had taken out of it; this candidate is giving to the community, without having got anything for herself," a member of the jury pointed out.

The jury honoured Shah for creating an organisation that had the capability of 'strengthening the Indian community and help build young leaders within it'.

"I am both honored and humbled to have been selected as the recipient of this award in a year that had such tremendous contributions from Indian Americans in politics, literature, music and health," Shah said in her acceptance speech.