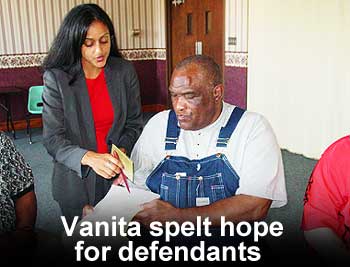 For families of the 46 defendants, rights activist Vanita Gupta represented hope. For most, the only hope, since their family members in jail did not even have legal representation. Gupta realized many cases had been botched as the defense lawyers didn't push the envelope enough. They were not prepared to fight the system hard enough.

"Texas doesn't have a state public defender system. When a defendant can't afford a lawyer, the judge in a small town appoints one from a list he has. In effect, the lawyers depend on the judge for their bread and butter," she points out.

Gupta began to suspect that manufactured evidence of drug use and sale had been introduced into the case, perhaps by Coleman. "The only link between the physical evidence and defendants was his testimony."

Gupta, at the head of her team of lawyers, fought the case. Coleman was forced to admit, under oath, he had perjured himself on at least four occasions. He admitted to using the word 'nigger' to stigmatize African Americans and claimed he did not think it was a term indicative of racial bias.

"It was the most disgusting testimony. I hope I never have to hear it again," Gupta recalled. "What made it worse in this case was prosecutorial misconduct, as they suppressed material on this officer on whose evidence the convictions were made. That's a huge amount of evidence."

It turned out to be a key factor. Judge Ron Chapman overturned all convictions on the basis that Coleman wasn't a credible witness. Four years after they were wrongfully confined, the 46 defendants walked out of Tulia jail -- Vanita Gupta was waiting outside, to welcome them.

It was a fairy-tale, the kind Hollywood's scriptwriters dream up. In fact, the Vanita Gupta story is likely to end on the silver screen -- Variety, the respected trade magazine, reports that Academy Award-winner Halle Berry (Monster's Ball) is being considered to play the role of Vanita Gupta in a film to be produced by Mike Tollin and Brian Robbins.

The film 'Tulia' will be scripted by Karen Croner (One True Thing).

Justice had been served -- and Gupta woke up and found herself famous. Awards and accolades followed in short order. Earlier this year, Reebok named her as one of four winners of its prestigious Human Rights award.

To her mind, a greater reward came in May, last year, when she married. She is reluctant to discuss her husband, or even to name him. He is, she says, another passionate lawyer. That is all this intensely private person will say about the man who waited patiently while his fiancée made innumerable trips to a small Texas town to fight her battle. 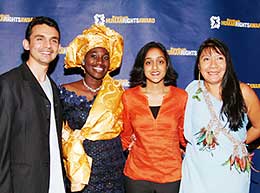 Gupta realizes her work had begun. Tulia, she says, is merely the tip of a very large iceberg. "I could probably work all my life representing such people," she says, "but the real need is for systemic reform, to ensure more Tulias do not happen."

The Indian-American community did not know what to make of it all. Gupta recalls how, when her story hit the headlines, she kept getting asked why she, as a South Asian woman, was working on African-American issues.

"Issues between different communities remain the same. Take racial profiling, which used to be an African-American issue. After 9/11, it encompassed South Asians and Arab Americans -- in a different context, but resulting in the mass targeting and constitutional violations of communities based on color."

For Gupta, there is no difference between the skinheads who had taunted her family while she was a child, and the police officers of Tulia who had targeted a community. Both spelt injustice -- the thing she had spent years in law school learning to combat.

Back to Part I

Sonal Shah is India Abroad Person of the Year 2003