Part 5 of the series.

Part 4: Why India is concerned about Bangladesh

Elegance mixed with a no-nonsense style. Add a formidable knowledge of  economic and political issues, and you have Veena Sikri, India's high commissioner to Bangladesh.

Sikri, who was India's envoy to Malaysia before being posted to Dhaka in December 2003,  has also served in Paris, Hong Kong, Kathmandu, Moscow, New York and of course New Delhi, in various positions after joining the Indian Foreign Service in 1971, when she topped the UPSC list. Fluent in Russian and French, she has a masters in economics from the Delhi School of Economics.

Her husband, Rajiv Sikri, is also a senior Indian diplomat. He was India's ambassador to Kazakhstan and is currently Secretary (East), in the ministry of external affairs, New Delhi. The Sikris have one married daughter and a son.

In a wide-ranging interview, Veena Sikri, known for her elegant saris and dry wit, asserts that only an honest dialogue can bring about understanding and resolution of the problems plaguing bilateral relations between India and Bangladesh.

The Indian media has been consistently negative about Bangladesh of late. How would you classify India-Bangladesh relations at the moment? 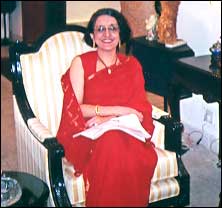 Today's [November 15] papers carried a full page interview with Prime Minister Manmohan Singh. It epitomises our approach towards Bangladesh. It's a very positive approach, it's a very sincere approach, and it epitomises the high degree of importance that the Indian government attaches to relations with Bangladesh. Dr Manmohan Singh comes across as absolutely genuine, and I think this characterises the approach of his entire government.

The second point I would like to make is that the people of India, on the whole, are very positive towards Bangladesh. If you go to any corner of India -- south, north, east, west -- they remember 1971 as an important event. And they recognise the courage of the Bangladeshi people. And I think it's very important to note that the people of Bangladesh also remember that very much.

For instance, when Gen J S Aurora passed away recently, there was such a spontaneous outpouring of sympathy, goodwill, remembrance for him not just in Dhaka, but across Bangladesh. I think it's an expression of the inherent goodwill that the Bangladeshi people definitely do have towards India.

But then you come to the issues. But whatever issues are there, they should be solved in that same spirit of understanding and goodwill. For that you have to have an active, uninterrupted dialogue, and to do it directly, not through the media.

So when you say that in India some people are writing like this, I think they are discussing the issues. And on each particular issue you could have one view or another. For example, sometimes the fact is that there has not been a dialogue on some issue. So you may ask, why is the dialogue stalled? Or if a dialogue has taken place, why were the results not good enough? You can analyse that. But that does not mean you have an anti, or negative position.

So what are the main issues?

There is this strong feeling in Bangladesh about the trade imbalance. But one has to analyse that. Number one, we recognise that there is a trade imbalance. Number two, we are willing to do our best to resolve it. But number three, this trade imbalance is basically on goods which Bangladesh entrepreneurs, traders, buyers and manufacturers import from India. Because these are international quality goods at highly competitive prices.

What one can discuss are ways of increasing Bangladesh's exports to India. We have offered a bilateral Free Trade Agreement with Bangladesh, along the lines of the one we have signed with Sri Lanka. The latest figures show that within the SAARC [South Asian Association for Regional Cooperation] countries, Sri Lanka has overtaken Bangladesh as India's largest trading partner. So knowing that this works very well, we have offered -- it's still on their table -- a similar bilateral FTA with Bangladesh.

We feel that this [the FTA] would encourage further Indian investment in Bangladesh. But whether we discuss this bilateral FTA or not, in order for Bangladesh to get access to Indian markets, we need to have a 'rules of origin' agreement. We also need to harmonise our codes and standardise our classifications and so on. So all these are technical matters which need to be worked out through a very intensive trade dialogue with Bangladesh. And we would very much like to do that.

We also have interest by big Indian groups like the Tatas to invest substantially in Bangladesh, perhaps one of the largest investments ever in Bangladesh. If that were to materialise, Bangladesh's exports to India could be up to $1 billion a year, of products that the Tata group would like to manufcture in Bangladesh.

What I am saying is that an adverse trade balance is not an issue in itself. It is perhaps leading to a problem, but it is not really a problem in itself. We understand their concerns, and we have very sincerely offered to talk to Bangladesh about it. We would appreciate if those talks take place. But to politicise this issue, to mark it as a concern, in fact makes it even more difficult to solve it.

For trade, there needs to be connectivity within the northeast. Our prime minister spoke of connectivity among the SAARC nations. And here, for instance, Bangladesh has been talking about trade with Bhutan and Nepal. As fellow members of SAARC, we are truly alive to the importance of this. All of us must trade. All of us must have connectivity.

We have actually given transit facilities for Bangladesh's trade with Bhutan and Nepal. That trade does take place, though it's a very small figure at the moment, and even the facilities we have given at the moment are substantially under-utilised. Should this volume increase, requiring more Indian facilities, we will look at it.

But we do feel that just as Bangladesh attaches importance to trading and getting access to Bhutan and Nepal, then certainly for the government of India, it is very important to have access to the northeast. For this, we have made several proposals, to increase the connectivity of India with its northeast through Bangladesh, whether through roads, rail, or riverine routes, and we would very much like to have a chance to talk to Bangladesh about this. Because again it is a win-win situation.

At the moment, even if you look at our trade with Bangladesh, at least 70 per cent is focused on the land route. Whereas if you were to diversify the connectivity, the transport linkages between Bangladesh and India, use the riverine route, use containerised cargo through barges, similarly the rail route, the entire trade -- the mechanism, the facilitation -- would be modernised. At the moment, it is so difficult, that what is a pure physical overload is thought to be a para-tariff barrier or a non-tariff barrier. It's just physically impossible to handle that kind of a load through that one land route.

What about the export of Bangladesh gas?

We have always been ready and willing to discuss the import of Bangladeshi gas to India, but the issue has become very politicised here. So, that issue is not on the table at the moment.

But the issue that is there is the one about the tri-nation gas pipeline, which would import gas from Myanmar through Bangladesh to India. It is essentially a commercial proposition -- the pipeline would be built by an international consortium -- and it should be looked at as such. There are international criteria set by energy majors for such pipelines, and we hope that there will be a response from the Bangladesh government on that.