In the crowded, bustling market just opposite Dhaka's plush Sonargaon Hotel, Abdul Majid sits on a small stool on what passes for a pavement. A colourful assortment of vegetables adorns the green tarpaulin spread on the road in front of him.

Above 60 now, Abdul was in his early thirties during the tumultuous days that preceded the birth of Bangladesh in December 1971. He ran a small grocery shop in Jessore, with his wife and two children.

And he was a razakar.

Literally, it means 'volunteer', but in Bangladesh the word is synonymous with traitor, and used to describe those who opposed independence from Pakistan and helped in the murder and rape of millions of Bengalis as part of Islamabad's scorched earth policy.

Many razakars were also members of the Jamaat-e-Islami or other religious parties which owed allegiance to Islamabad. Abdul was a follower of Jamaat leader Golam Azam, who led the razakars.

While many razakars and most Jaamat leaders including Golam Azam fled to Pakistan when it became obvious that the birth of Bangladesh could not be aborted, many, like Majid, could or would not.

Days after independence, a mob of angry neighbours stormed Abdul's shop and set it ablaze. His five-year-old

daughter, who was severely burnt in the fire, died five hours later.

Badly beaten up by the mob, Abdul fled with his wife and son to Dhaka, where he now makes a living selling vegetables.

When his shop was attacked, "there were Indian soldiers in Jessore. But they refused to help when I approached them with my dying daughter," says Majid. "And you want me to love India?"

According to Majid, "If we were still a part of Pakistan, would India have had the nerve to bully us the way it is doing now."

Anwarul Ahamed, 21, is no razakar.

The young Dhaka University student takes pains to explain that he is not personally anti-India, but he can well "sympathise with the growing sentiments against our western neighbour."

For one, he says, "how can India expect gratitude from Bangladesh for helping during the liberation struggle, when everyone knows that it was in India's interest to do so?"

Categorically denying that Pakistan was helping fan the anti-India sentiment in his country, he avers that the rising anger against the "Hindu fascist" country was fanned by India's actions.

"After our independence, India has time and again treated us with condescension and disdain. You have threatened to cut off our water sources. You have repeatedly accused us of harbouring anti-Indian rebels on our soil. Your border forces regularly attack our villages, rape our women. You accuse us of flooding India with illegal immigrants. And while mouthing platitudes about a free market, you deny us the right to sell our goods in India without tariffs. We might be poor, but we are Bengalis, we have some self-respect," he declares.

He disagrees with his classmate Samiran Mondal, who argues that acute poverty and illiteracy are being exploited by the Muslim fundamentalists, who preach hate and violence against India at the Quami madrassas which are funded by Saudi and Pakistani charities.

"The problem of hating India actually is not only about hating India but it has a deeper meaning," explains Arnab Tagore, a Bangladeshi youngster who is now a medical student in Toronto.

"You see, India liberated Bangladesh in 1971, and around that time, India was very much liked in Bangladesh. The way majority of the Bangladeshis hate India now is the same way Jamaat-e-Islam, the religious fundamentalist party, used to hate India," he says.

"This Jamaat-e-Islam party has come a long way. In India, even though the effect of Hindu nationalism is dying away slowly, in Bangladesh Islamic fundamentalism is rising. Now in Bangladesh you have to show that you are dedicated towards the Islamic cause in order for you to get votes. On the other hand, in India a political party has to show that it is secular in order to get the votes of undecided voters."

"India has made some mistakes as well," he adds.

"However, each and every mistake had been overstated in Bangladeshi newspapers and propagated by the Jamaat-e-Islam. Let me give you some mistakes from the Indian side.

"One, around the border the Indian army was responsible for shooting at some innocent people. the Jamaat-e-Islam and the ruling BNP propagated this incident as 'India Bangladeshi-der mere kete sesh kore dicche (India is killing everyone in Bangladesh).' To tell you the truth, that isn't the case. More people die in Bangladesh due to disease. They also forget to mention that BDR (the Bangladesh Rifles) itself has killed some Indian soldiers in a barbaric way.

Image: Villagers with the body of a Border Security Force soldier killed during clashes with the Bangladesh Rifles

"Two, India was actually responsible for the water problem through the Farraka dam. From the legal side, even though

"Bangladesh cannot touch India as water is considered a resource of particular countries, for the sake of moral understanding India should have been more careful regarding this problem. This water problem has caused various environmental problems in Bangladesh."

"Three, there are some stupid fanatic Hindus in India who talk about independent Bangabhumi, that they would break India and create an independent Hindu republic," says Tagore.

"According to the secular people of Bangladesh and other sources, there might be no more than 100 people supporting this movement. What they do is as soon as Hindus are attacked in Bangladesh, they spout some anti-Bangladeshi remarks on the border. That's it!"

"However, the BNP portrays them as having 10,000 soldiers ready to take over Bangladesh. They also accuse India of not catching them. Well, how can you catch something if it doesn't exist?" he asks.

Most people in Bangladesh agree that the growing anti-India feeling in their country mirrors the rise of the Jaamat.

Despite being accused of war crimes, and despite holding a Pakistani passport, Abdul Majid's mentor, Golam Azam, was pardoned and allowed to return to Bangladesh as the Jaamat leader in 1977 by General Zia-ur Rahman.

Following an uproar against Azam after the restoration of democracy in 1990, a case was lodged against him for heading the Jaamat while holding Pakistani passport. But the supreme court ruled that he was a Bangladeshi by birth, and restored his citizenship.

In the June 1996 election, the Jamaat won only three seats.

In December 2000, Azam resigned and Matiur Rahman Nizami (left) became amir of the Jamaat-e-Islami Bangladesh. In the 2001 election, the Jaamat got 17 seats, and Nizami was named minister of industries in Khaleda Zia's cabinet.

"The Jaamat has been consistently and virulently anti-India, long before Bangladesh was born. Khaleda Zia knows that she won the election because of her hardline position against India," says an Indian official. "While she may or may not personally support their more radical demands like the imposition of Sharia law, she is politically beholden to them, and hence dare not antagonise them," the official adds.

"Besides, she seems far too busy running down (Opposition leader) Hasina to bother about such mundane things like running the nation," he says.

"She also hopes that by fanning the flames of anti-Indian sentiment she will be able to distract attention from the more pressing problems plaguing the nation. The problem, as far as India is concerned, is that she uses her ultimate weapon with aplomb: Absolute denial."

Next: What are India's problems with Bangladesh? 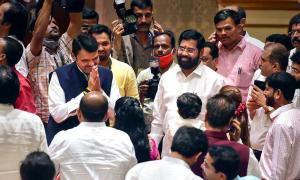 'BJP is playing a 'gehri chaal' in Maharashtra'