One on death row, the other at large 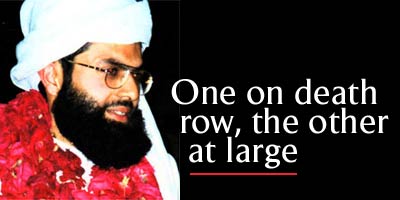 Five years after the hijack of IC-814,rediff.com brings you an exclusive series which looks at where the main protaganists of that fateful week -- the passengers, crew and the released terrorists -- are now, and the lessons learnt by the government.

Part I: Where is Masood Azhar?

Sheikh Ahmed Omar Saeed, the second militant released by India, is a British national of Pakistani origin, and an alumnus of the London School of Economics.

Already convicted for having masterminded the gruesome killing of American journalist Daniel Pearl, Omar awaits the outcome of his appeal against the death penalty.

The British-born convict, who was sentenced to death on July 15, 2002, keeps reading books on jihad in his death cell.

The Wall Street Journal reporter disappeared on January 23, 2002 while he was researching the story of British shoe-bomber Richard Reid. On May 17, 2002, police in Karachi discovered the journalist's decapitated body in the garden of a house in the suburbs of Pakistan's economic capital.

Pearl had left his Karachi home on January 23, 2002 to meet Omar at a local restaurant, hoping that Omar would arrange a subsequent meeting with Pir Mubarak Shah Gilani, head of a small extremist political faction named Tanzeem ul-Furqaan.

Having initially met Omar along with his colleague and local journalist Asif Farooqi, Pearl chose to venture out alone. In an e-mail to the US authorities four days later, an unknown group The National Movement for the Restoration of Pakistani Sovereignty sent ransom demands along with pictures of the 38-year old reporter in chains.

During interrogation by a joint team of security officials belonging to the US and Pakistan, the intelligence operatives were shocked when Omar claimed to be an Inter Services Intelligence agent.

He further volunteered to describe his role in the explosion outside the Jammu and Kashmir state assembly building in October 2001 and the attack on the Indian Parliament in December 2001.

A deadly whirlpool of terror

His confessions revealed that these terrorist operations had the ISI's backing and that he claimed to be on their payroll. On February 20, 2002, three men approached a Karachi-based journalist reporting for the Pakistani media group Online International News Network, offering to sell a compact disk depicting Daniel Pearl's death for $200,000 as well as a promise of global coverage.

These men were reportedly seen earlier distributing press releases for an unknown local political faction. Lacking the equipment needed to play the CD-ROM as proof, the three men returned the next day with the footage converted to videotape.

With a camera purchased from a local video store, the journalist was able to view and confirm the tape's gruesome images. In a seemingly lapse of judgment, the owners of the tape released the copy prior to payment.

Having received the tape late on February 21st, Online's New York office contacted the FBI and turned over the footage; according to the reporters, no copy was made.

On February 22, 2002, the FBI confirmed that Daniel Pearl had been killed.

Omar dropped out of the prestigious London School of Economics when war in the heart of Europe lured him to a life of Islamic militancy.

He was radicalised by the people he met and the things he learnt on the way to Bosnia in 1993. After the trip, he dropped out of the LSE and headed for the training camps in Afghanistan.

Before being convicted for Pearl's murder, Omar had been charged with kidnapping a US citizen.

In November 2002, Omar was secretly indicted in the United States for the 1994 kidnapping of four Westerners in India, including Bela Nuss of California. He spent five years in an Indian jail for those kidnappings but was released as part of a deal to free the hijacked passengers of an Indian Airlines flight in 1999.

On January 18, 2004, 18 months after being convicted for Pearl's murder, Omar was transferred by helicopter from Hyderabad to the Adiala detention centre near Rawalpindi, close to Islamabad.

An interior ministry spokesman described the shifting as a security measure and had said: 'Dangerous criminals form themselves into groups if they are allowed to stay in the same place for too long That is why they are moved to different prisons.'

But other sources, in particular those quoted by The New York Times, reported a link with the assassination attempt on General Musharraf on December 25, 2003.

The move therefore would have been to interrogate Omar on the implication of Masood Azhar's Jaish-e-Mohammad in the suicide bombing.

The newspaper Dawn, however, claimed the Inter Services Intelligence based in Rawalpindi wanted to question Omar about his links with Al Qaeda and the 9/11 attacks.

International media reports have repeatedly claimed that the FBI has solid evidence to prove that Omar played a key role in financing the 9/11 attacks.

9/11 and after: complete coverage

Omar sent a draft for $100,000 to Mohammad Atta, one of the men who crashed an aircraft into the World Trade Center in New York. The draft, sources say, was sent in the summer of 2000 employing a pseudonym.

Atta is thought to have returned $15,600 through the hawala channel just before the attack.

The FBI believes that Omar met Atta during one of his visits to Kandahar and knew of the plans for the September 11 strikes.

Further investigations revealed that the money transferred into Atta's account was actually provided to Omar by former ISI chief Lieutenant General Mahmood Ahmed. These findings apparently proved to be the proverbial last nail for Mahmood who was subsequently sent home on October 8, 2001 by General Musharraf.

As things stand, Omar's appeal against his conviction has not been heard so far, as the hearing on the appeal is being repeatedly postponed on one ground or the other.

'I am not scared of death, it will be Allah's will and if it is written like this, no one can stop it. But if it is not, then no one can kill me,' a friend of Omar who met him in prison was quoted as saying by a Pakistani newspaper. The friend spoke to AFP on the condition of anonymity.

'Omar is in high spirits. His body language reflects his strong commitment to his belief. His beard has become longer and his hatred towards the Americans, the Jews and the Hindus has increased manifold,' he was quoted as saying.

Mushtaq Ahmed Zargar, the third jihadi released as a result of the hijacking of IA-814, is reportedly engaged in reviving his group, Al-Umar Mujahideen.

Currently based in Muzaffarabad, the capital of Pakistan-occupied Kashmir, Zargar is the only Indian Kashmiri among the released trio.

Known for his ruthlessness and his ability to plan stunning strikes, Zargar grew up in Gani Mohalla of the Jama Masjid area of Srinagar, Jammu and Kashmir. He was motivated into militancy sometime in 1984, but he became famous during the kidnapping of Rubaiya Sayeed, daughter of the then home minister Mufti Mohammed Sayeed.

He parted ways with Yasin Malik of the Jammu and Kashmir Liberation Front after one of his suggestions was not accepted. Zargar then formed the Al-Umar Mujahideen in December 1989. The group went on to earn a reputation for planning and executing some of the most inhuman strikes in the valley.

Zargar is believed to be an ideal linchpin for the Pakistani intelligence establishment in Jammu and Kashmir, given the fact that he happens to be a Kashmiri who used to live in Srinagar's Jama Masjid area (Gani Mohalla) before taking up the gun.

There are at least three dozen murder cases registered against him in Srinagar, where he was known for his militant activity. He was first arrested in 1984 when he was only 17.

Four years later, Zargar was picked up by Zahoor Sheikh, a member of the People's League, one of the precursors of the Jammu and Kashmir Liberation Front.

Zargar used to tie grenades to his victims

He fell out with JKLF chief Yasin Malik soon after, and in December 1989, established the Al-Umar Mujahideen in Srinagar. He later opened an office in Muzaffarabad.

The ISI found Al-Umar to be a perfect foil to the JKLF, given that the latter, keen on liberation, was showing clear signs of upsetting Pakistan's plans to annex Kashmir.

The ISI pumped money and material to Al-Umar that set up an extensive extortion racket in Srinagar. Zargar was involved in at least seven kidnappings for ransom.

To help a businessman friend, he even ordered a ban on the use of Maruti vehicles in Srinagar. The reason: His friend was a dealer for a rival car manufacturer.

Zargar was considered to be the undisputed ganglord of Srinagar from 1989 to 1993, indulging in terrorist and criminal acts with equal felicity.

In 1993, Indian security forces gunned down several of Zargar's top commanders and finally arrested him in Srinagar.

He remained in Kotbalwal jail in Jammu till then external affairs minister Jaswant Singh was compelled to escort him to freedom in Kandahar.

In Pakistan, Zargar remained out of sight, but not exactly out of touch. He was constantly in touch with Masood Azhar.

In an interview posted on an Islamic web site, Masood had described 'two notable qualities' in Zargar.

'One is his deep concern for his mujahideen. He always took the group across the border himself. If he continues to do so now, the movement will undoubtedly gain. The second is that all the mujahideen gather around him. Those who, because of his arrest, have given up jihad or have left for other countries will now come back again. The movement will thus get a new impetus and gain momentum.'

As things stand, there are reports that the Pakistani intelligence establishment continues to assist Zargar, encouraging him to build up the pace and tempo of militant activity in Jammu and Kashmir.

What is most worrying for Indian intelligence agencies is that though they are aware that Mushtaq Zargar is in Pakistan, there is no clue about his exact whereabouts. And this has led to the fear that in some secret camp he is refining his plans before embarking on another reign of terror in the Kashmir valley.