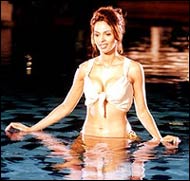 nlike other actresses who spend time looking for the right handbag to complement their designer outfits, Mallika Sherawat makes sure her eye-shadow matches her knickers!

Yes, she manages to expose her chaddies in a U-rated film!

If men haven't already rushed to see Mallika in Kis Kiski Kismat, it's not too late to grab some eye-candy.

The exhibitionist never fails to disappoint.

a scandalous comic scoop by Govind Menon (Danger, Khwahish) is also Dharmendra's comeback film as rich stockbroker, Hasmukh Mehta, 'the big bull of share bazaar.' Mehta is very cautious with his money. He doesn't approve of his son Harish (debutant Siddharth Makkar) buying a foreign car. He is enraged when his spendthrift wife (Rati Agnihotri) buys an Rs 900,000 sapphire necklace. Driven into fury, he throws the necklace onto the street. Which makes Meena Madhok (Mallika) trip and spoil her clothes.

To make it up, Mehta takes her to a top clothing store and buys her expensive earrings to go with the necklace, and then drops her at her uncle's house in his Mercedes. Every one thinks that this is Mehta's mistress; and the rumour spreads.

But neither Meena nor Mehta have a clue about it. The drama and confusion is further heightened when Meena falls in love with Mehta's son Harish.

The situation becomes more complex as the gossip get fueled, the stock market crashes, Mehta is in a verge of financial collapse and accused of being unfaithful to his wife. Soon, Harish falls in love with Meena.

The film is a spoof on the rich and the famous; mocks wives who spend too much time in beauty parlors; and pokes fun at celebrity gossip and scandals.

It is a delight to see Dharmendra back on the big screen, even though he could have been offered a better role. His shots with Mallika are awkwardly romantic and funny.

Richard Gere, Harrison Ford and Michael Douglas: old, rich and distinguished men always manage to hitched with much younger women in Hollywood. But such pairing is rarely seen in Bollywood. Even in Kis Kiski Kismat the Dharmendra-Mallika pairing is only a 'misunderstanding'. Will such casting herald a trend, where age is no bar? Is it really possible that Rishi and Anil Kapoor, and their likes won't have to camouflage their potbellies under their knitted pullovers and run around trees doing the song-dance number anymore?

Funny in parts, the skit has a poor performance by Siddharth Makkar who is over shadowed by the skimpily clad Mallika. However, from Reema Lamba to sexy glam doll, her kismet seems to be shinning bright. Mallika is a visual feast with dance numbers, and kissing scenes.

If the Spice girls could ride on the 'Girl Power' slogan, Mallika proves our desi chicks don't lag far behind.

Starlets, who have been forced to expose, have turned tables by selling their sex appeal to get instant stardom and make big bucks. Be it music videos or films, women in short skirts, hot pants and low necks are here to rule!

It isn't hard to predict that this comedy masala film will draw in the crowds -- particularly if they are men!