Vaastu Shastra: Not for the faint of heart 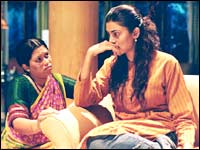 Right now, in a semi-deserted office, I'm looking around me. Sounds: a computer whirring to life, a door slamming shut, footsteps behind me, are all making me jumpy, and I'm just stopping myself from gulping. Standard-issue office sounds, but disconcerting because of the lack of active noise: telephones, chatter, gossip, yelling.

Vaastu Shastra works on that very level: we are afraid of space, of silence, of the blankness where anything could be.

Steve Harris' immortal lyrics from Iron Maiden's Fear Of The Dark thud like an unrelenting soundtrack inside my head, despite the fact that I haven't heard the song for a couple of years, at least:

Have you run your fingers down the wall and have you felt your neck skin crawl when you're searching for the light? Sometimes when you're scared to take a look at the corner of the room, you've sensed that something's watching you.

This is a severely scary film, and certainly not for the faint of heart. First time director Sourabh Usha Narang has skillfully manipulated sound and cinematography to great effect, and sincerely ensured a large part of his audience sleep with the lights on.

There will be some yelling, and people next to you will bury their faces in caramel popcorn, for the film does what it sets out to do: It is akin to hearing a noise behind a curtain, going hesitantly to check, then smiling with relief to discover obviously nothing there. And then hearing a 'boo!'

Have you ever been alone at night, thought you heard footsteps behind, and turned around and no one's there? And, as you quicken up your pace, you find it hard to look again, because you're sure there's someone there.

Most of the productions originating from Ram Gopal Varma's Factory these days are slickly made and cleverly edited, but this substantially raises the bar. From bizarre transitions to surreal angles, the cinematography is ingenuous, and complemented by some inspired editing. There are several shots where characters converse while the camera lingers elsewhere, triggering off a flood of 'oh, then this must mean...' thoughts in your then-hyperactive subconscious.

In my earlier conversation with the director, Sourabh hesitatingly admitted that the film has its share of red herrings, but didn't go further, implying that a horror film places even the ordinary into a queer context. There are several references in the film to the greatest horror classics of cinema history, and while I might accept a few of these as coincidences, they can't possibly all be. A lot of them are visual: the cycle from The Shining; the bunch of red-balloons from The Sixth Sense; nods to The Omen trilogy, Spielberg's Duel, The Grudge and several Others you ought discover on your own.

What these sporadically thrown in bits of suggestion actually do is interesting: they give you an 'almost' moment. Which is to say they let you believe you've successfully second-guessed the filmmaker. You luxuriate in your seat and believe that the movie isn't that original after all, you've seen Hollywood, you know what happens next. And so you wait for the shoe to drop. Except, in this case, it doesn't, and kicks you squarely in the nose instead.

The film has solid, credible performances, especially by the main protagonists. Four-year-old Ehsaas is striking in the film: quiet, cuddly and with a whispered sinister innocence worthy of Damien himself. Sushmita Sen is quite a treat, very believable, and it's good to see a model finally working hard enough to deserve her acting spurs. Chakravarty is his usual restrained self, but just seems the slightest bit unlike his given 'writer' credentials. The rest are filler. Or does one say 'killer'?

The camera is the main hero of the film, and as Sushmita lies next to Chakravarty on a dimly lit bed, we pan across onto the space between them, and the nightstand next to her. It is as if a black highlighter has been dragged vehemently onto the frame, zigzagging across celluloid and giving us darkness to contend with: darkness that, we know by now, could contain anything. You are instantly back to being Calvin, and wondering about monsters under the bed. You can't fear what you can't see, says convention. Or is it just vice versa, mocks the film?

Silence is the other antagonist, and gives us the freedom to imagine all kinds of macabre possibilities on our own, while the loud Dolby speakers now offered by every theatre in town are well-utilised by shrill laughs and eerie growls, loud enough to hammer, subwoofer-aided, through your heart, and stay there despite usually anticlimactic on-screen normalcy. You are constantly going to be expecting that which you will not see. [Also, you are advised to refrain from the company of young women after watching the film. Shrill laughter can be rather frightening, you will find.]

It is arguably not a mind-altering experience, the plot banal and considerably regressive, and there is a disappointing lack of mythos, of actual plot-expanding 'story', of the building up of legend. While not giving anything away, the end seems tacked on and hurriedly finished, and does not match the smooth build-up of the rest of the film, with even the special effects getting sadly cheesy. If looking for substance, this is not a complex ideology told through screaming banshees. It is not a film that has anything to say, really.

Watching horror films the night before, debating witches and folklores, the unknown troubles on your mind. Maybe your mind is playing tricks, you sense, and suddenly eyes fix on dancing shadows from behind.

Except, as I said, 'Boo!', which it says considerably loudly.