What is Proxy Voting? 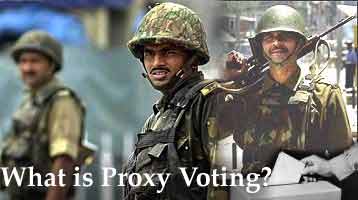 On September 22, 2003, India became one of the few countries to introduce proxy voting for its soldiers, drawing heavily from the system existing in Britain.

Ever since, the military authorities have been involved in educating soldiers posted in remote deserts and freezing glaciers on how to nominate their proxies.

The alternative -- postal ballot voting -- is also available to the soldiers.

What is Proxy Voting?

Casting of a soldier's vote through a proxy he nominates.

How does it happen?

Service personnel can nominate any eligible voter from his constituency on an approved form (Form 2) and submit it with his Commanding Officer. The CO forwards the proxy nomination to the appropriate authority, who sends it across to the district electoral officer or returning officer after due verification. The district official or returning officer then sends an acknowledgement back to the CO.

What proof of identity does the proxy voter need?

The soldier fills up another form (Form 13 F) giving details of the nominee and gets it authenticated by his commanding officer and sends it across to the proxy. The proxy needs to get that form attested by a first class magistrate. S/he must produce this form at the polling booth.

That sounds very cumbersome. Will an ordinary villager go searching for a first class magistrate to
get his attestation to cast a proxy vote?

The army admits it is cumbersome. "We are trying to see how the process could be made easy. We are also waiting other suggestions to improve the entire system," says Major General K P D Samanta, additional adjutant general at Army Headquarters.

Can one proxy cast vote for more than one soldier? Is such manipulation possible?

No, manipulation doesn't look possible. But one person can be the proxy for two soldiers.

Is the proxy nomination just for one election?

No. A soldier's proxy nomination is done only once in his service period. However, if he is unhappy with the proxy, or the proxy dies, the nomination can be revoked using another form [Form 13 G].

What if a soldier doesn't want to nominate someone as his proxy, but still wants to vote?

The soldier can then opt for postal ballot. Major General Samanta says the military is working towards improving the postal ballot system.

What has been the response to proxy voting from soldiers?

The Indian Army has 1,198,205 eligible voters, of them 818,997 have already applied in Form 2 for nominating proxies -- that is 68.35 per cent. Of those who have applied, 1,92,586 have already received acknowledgement from district electoral officers/returning officers.

Even for those who have not received the acknowledgement, the Election Commission has permitted the army to start the process of sending the second form, authority letters for the proxies.

The Air force and Navy figures were not available. But officers in both services said "similar response" was expected from their ranks.

What is the model code of conduct?
How the BJP stays on top
Managing election, Congress style
The man who is taking Advani places
The EC wins when they lose badly