The EC wins when they lose badly 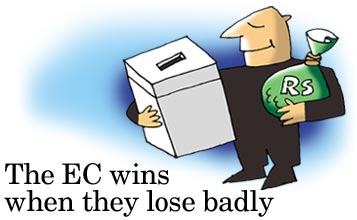 The winners in parliamentary elections make the headlines and enter the Lok Sabha.

Losers lose not just their hearts but also, sometimes, their money. But the gainer is always the Election Commission.

Over the years, the security deposits of defeated candidates have been a major source of revenue for the Commission. In fact, the deposits that candidates forfeit are the only income for the Commission, which otherwise depends on an annual budgetary allocation from the central government to run the organisation and also conduct elections.

Thus, more the candidates who contest and lose, the better it is for the Commission.

Under section 34(1)(a) of the Representation of Peoples Act, 1951, every candidate is required to make a security deposit of Rs 10,000 for the Lok Sabha election and Rs 5,000 for assembly elections. Defeated candidates who fail to secure more than a sixth of the total valid votes polled in the constituency forfeit their deposits.

Uttar Pradesh, which sent 85 members to the Lok Sabha in 1999, was the biggest source of revenue for the Commission; 963 of the 1,208 candidates who contested in the state lost their deposits.

The second state to earn revenue for the Commission was Bihar, where 497 candidates contested 54 seats and 381 lost their deposits. The third and fourth places went to Tamil Nadu and Madhya Pradesh, where 276 and 259 candidates, respectively, forfeited their deposits.

The security deposit for candidates used to be very low -- a measly Rs 500 -- until the 1996 general election. But the rapidly growing number of candidates, both serious and otherwise, who entered the fray forced the Commission to increase the amount by a factor of 20.

The proliferation of Independent candidates contesting elections used to be a huge problem for election officials. In the 1996 Lok Sabha election, 13,952 candidates entered the fray, compelling the Commission to print ballot papers in the form of booklets in some constituencies.

Though the Commission now earns a decent income from forfeited deposits, it may raise the amount further in the future, with the axe falling particularly hard on Independents.

In 2001, a Union law ministry panel on electoral reforms recommended that the security deposit be doubled progressively at every attempt for those Independent candidates who fail to win and still keep contesting every election.

It also recommended that any Independent candidate who loses an election to the same office thrice successively should be permanently debarred from that office.

Moreover, the panel suggested that an Independent candidate should be nominated by at least 20 elected members of panchayats, municipalities or other local bodies spread out in a majority of the electoral districts in his constituency. 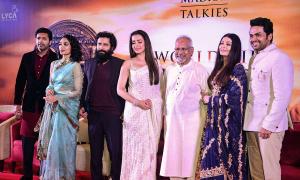 The Revolutionary Writer Behind PS 1