The Fog Of War

By Brigadier (retd) Shaukat Qadir
Last updated on: September 17, 2005 15:09 IST
In the third part of a four part series on the 1965 India-Pakistan war, retired Pakistan Brigadier Shaukat Qadir looks at the Sialkot sector.

Although the actual attack on Lahore preceded the attack on Sialkot by 24 hours but Sialkot needs to be understood before Lahore.

Some element of our (Pakistani troops always man the border, and on September 3, 1965 a patrol ventured across the Line of Control and captured an Indian dispatch rider who was carrying the comprehensive orders of Indian 1 Armored Division for the Indian offensive.

Nobody believed it: numerous examples of disinformation were cited, like the 'dead soldier' found by German troops during the Second World War who was also found carrying the complete orders for war providing the wrong location of the second front about to be opened.

While intelligence assessments are hardly to be blamed in such a situation, whichever conclusion they arrive at, GHQ's decision not to order precautionary deployment defies understanding. It was left to formations to take 'precautionary measures.' In the case of the Sialkot division, it moved into forward concentration areas, but neither dug its defensive positions, nor laid any mines.

In the early hours of the morning of September 6, about the time that the attack on Lahore began around 3.30 am, the bridge over Ravi at Jasser began to be shelled. Sometime later the bridge was attacked by a small raiding party.

It is not clear how the confusion occurred, but then that is the fog of war. The company commander at the bridge ordered its demolition while most of his force was still across; they either swam back or were captured.

Probably, to justify his actions, he grossly exaggerated the attacking forces, leading the division commander to believe that this was the location of the main attack on his sector.

In response to this around midday the GOC sent a brigade with an additional armored regiment to stabilise the situation at Jasser. Later it was discovered that Jasser was merely a diversion, and the main attack was to follow 24 hours later. However, the forces sent to stabilise the situation at Jasser were called 'committed reserves,' a term denoting troops committed to defending an area, but available as reserves if their area did not face a threat.

They were a few miles short of Jasser when the main attack began opposite Pasrur-Chawinda-Phillaurah, the positions they were supposed to be defending, and the brigade with the armored regiment was ordered back.

The division was in a state of total chaos and confusion. Considering that this formation had moved into battle locations, even if these had not been prepared, it should have been more prepared than other divisions.

The Sialkot division was commanded by Brigadier Ismail, an army service corps officer. In those days it was not unusual for a brigadier to take command of a division on three month's probation, before being approved for promotion.

Ismail was at this stage.

Not only was he from a non-fighting arm, but was under probation and thus insecure, and his insecurity and lack of confidence was infectious. It appeared that nobody knew what to do. Throughout his command there were spates of contradictory orders, units to be relieved pulled out without being relieved, giving the Indians a free run.

This state of chaos was to be a feature of the entire Sialkot operation, until the command was changed, but by then the worst was over.

The main Indian attack began early on September 7, with the infantry forming a bridge head, a defended area for forces, specially armored forces to build up, before proceeding further. India's 1 Armored division built into the bridge head and then commenced advance around 10:30 am.

Fortunately for us, the Indians too could not take advantage of the total vacuum that existed through all the confusion. It appears (from their own analyses later) that the armored division could not believe that there was no defense. They were certain that they were being lured in to a trap.

Perhaps this was due to the fact that they were aware of their battle orders being captured and could not believe that Pakistan army would not have acted upon this knowledge. Consequently, where they could have been running full pace, they crawled, and extremely slowly, allowing us to atone for our errors.

Only those who have seen formations in move having to turn back can actually imagine the confusion of halting and turning back from close to Jasser. In such a move, infantry elements are likely to be leading, with the armor in between, followed by artillery and then other support elements, for the return they need to get into the same order of march.

One can but imagine doing that on a narrow road. However, in view of the emergency, the armored unit led the return, followed by the artillery then infantry and the rest. This was to be a blessing in disguise.

Major Muhammed Ahmed, one of the squadron commanders of the armored regiment was in the lead as they approached Pasrur, then Phillaurah in the early hours of September 8 when he spotted tanks ahead of him. Fortunately, he was in a copse, with the advancing Indian tanks offering him a broad side.

This intrepid officer took the initiative, which most officers are supposed to, but seldom do, and opened fire. These Indian tanks were elements of the leading brigade of the Indian armored division. He hit a large number of tanks of the leading Indian unit and some of the following one.

This was enough to convince the Indians that they had indeed been lured into a trap.

Meantime the rest of the same armored unit moved on from a flank towards Chawinda, where some more of the Indian armored division units had halted upon news of the ambush in Phillaurah. They too opened fire to cause more casualties.

Ironically, this was the very area they were supposed to have been defending. Had they been doing so, they would have been facing the enemy and, perhaps, would never have had the opportunity of taking on the Indian forces from a flank to inflict the kind of casualties that they actually did.

Fortunately for us, the Indians had been over cautious when the opportunity was offered, an intrepid squadron commander halted their attack from a fortunate 'ambush', and the rest of the unit also caught some of the armored unit unawares.

This was later referred to as the greatest tank battle since the Second World War. The Indian armored division never recovered; we had been saved by the courage of a 'lucky' squadron commander, who was afforded this opportunity because his regiment had been ordered away from its defensive position because of the ineptness of his division commander!

It was at this stage that GHQ finally realised that the Indian main offensive was directed at Sialkot, not Lahore, and that the captured orders were in fact true. On the same day, September 8, Tikka Khan was asked to take command of the Sialkot division and our second armored division was also ordered in to Sialkot sector.

While this was referred to as an armored division, it was actually no more than a brigade. However, from September 9 onwards, the Sialkot sector was a see saw of attacks by the Indians and counter attacks by the armored division with various infantry elements in support, which on the balance tilted in favor of our own forces, primarily because the Indian 1 Armored Division never recovered from its setback.

Though the battle at Sialkot was far from over, but the worst was past and we can afford to omit other details to move on to Lahore.

Next: Lahore and more 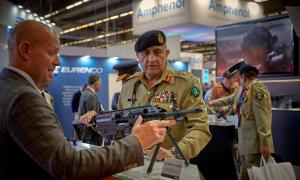