The King of Tonga 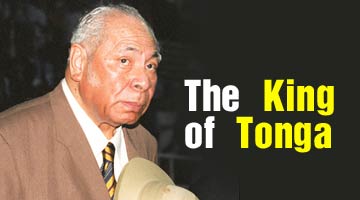 I learnt about the kingdom of Tonga and its monarch for the first time, when a picture of Prime Minister Indira Gandhi pinning something on the chest of His Majesty King Taufaahau Topou IV of Tonga appeared in the newspapers.

Gandhi had to stretch herself to the extent possible on her high heels to reach his chest and she looked tiny in his presence. I clipped the picture and scribbled on it: "The smaller the country, the bigger the leader!"

Years later, when I was in his presence to present my credentials as the high commissioner of India to the kingdom of Tonga in its capital, Nukualofa, I was glad that he was sitting in all the pictures. In Tonga, everything is in miniature except the king.

From Suva, Fiji, I was accredited to seven South Pacific island states and, among them, Tonga was the only monarchy with a ruling rather than a reigning king. Pomp and splendour, which normally go with monarchies, were important in Tonga also.

Even today, foreign envoys have to wear a striped morning coat and carry a silk hat in the presence of the king. Unlike my colleagues from other countries, who had to hire the gear from New Zealand, I decided to go desi and wore my national dress. After a guard of honour by the royal bodyguards, my wife and I were ushered into the audience chamber, where the king received us and seated us, while he himself filled a whole sofa. He was 70 years old and weighed 200 kilograms then, today he is 87 and heavier.

The moment we started a conversation after the credentials ceremony, the band outside struck up a tune to proclaim to the world that a foreign envoy was paying respects to the king. The band virtually drowned out the king's voice. We had to sit on the edge of the sofa and lean forward to hear the king and we found ourselves shouting when the band stopped to recharge. This is the reason why, in every picture of the king's audience, the visitors look awkward, while the king looks fully relaxed.

The conversation, of course, was delightful. The king was very well informed on world affairs and asked me questions about the developments in India and our neighbourhood. He had very good memories about his visit to India and was full of praise for Air-India because the airline gave him two seats for the price of one, whenever he flew with them.

The source of his knowledge of current affairs appeared to be the BBC, which he avidly heard throughout the day. In addition, he had visitors from different parts of the world, who briefed him on subjects of his interest. I was surprised to learn from him that India was manufacturing the 'Dronier' aircraft with license from France. He asked me whether we could sell him a few, but anticipated my response, saying that, perhaps, we had no rights to sell the aircraft to other countries. Even with his world view, he had refrained from joining the UN till 1999, but Tonga has been a member of the Commonwealth.

Even though he is a stickler to protocol, the king has no qualms about receiving ordinary people like captains of visiting ships and even interested tourists. He told me a story as to how he came to collect nearly a hundred ukuleles. A Soviet captain asked him some years ago what he could bring for the king when he came back to Tonga next time. The king said he was interested in an ukulele. Apparently, his weakness for the string instrument went into the KGB files and from then on, every Soviet captain, who came to the island, brought him an ukulele.

The king is as fond of exercise as he is of food and set an example to the overfed Tongans by exercising publicly. On a certain day in the week, the Tonga airport would be closed as the king would be riding a specially designed bicycle on the tarmac, with six bodyguards running alongside. He would go to public swimming pools and other facilities. Tonga even has a golf course and Crown Prince Tupouta is very fond of showing off his latest golf equipment. He told me his father, being fond of more active sports, was healthier than him.

Eating was the main feature of the week-long festivities to mark the king's seventieth birthday, to which the ambassadors in Suva, most of them accredited to Tonga, were invited. We had a heavy schedule; having to begin with a prayer breakfast at 5.30 in the morning and go on to lunch and dinner every day. Dress was prescribed for each occasion and the only thing we did between meals was to change clothes. Huge baskets, shaped like boats, six to seven feet long, filled with food, ranging from suckling pigs to delicious tropical fruits, were brought by the villagers. We sat around them, picked whatever we fancied and feasted on them.

The king sat through the festivities, often in his favourite black leather jacket, which appeared too warm for Tonga. He had told me once that he wanted to get some Indian ceremonial tents (shamianas) for his palace grounds and we gave him one as a birthday gift. He was most delighted and ordered more from India for his next birthday.

The king is also a lay preacher of the Wesleyan church and, of course, very religious. Tonga is without any activity on Sunday, not even sports. The tourists are encouraged either to stay in their hotels or go out on cruises so that they do not disturb the peace of the island. Tonga is a tourist attraction as it is situated just west of the international dateline and it is there that the day breaks first in the world.

The longevity of the monarchy, of his reign (since 1965) and of the king himself has astonished historians. Tongans (population: 110,000) seem quite happy with his reign. There was hardly any political issue to be debated in the Parliament. Once the king's daughter was criticised for making money by allowing nuclear waste to be buried in Tonga. When she claimed that it was absolutely safe, tee shirts appeared with the inscription: 'If it is safe in Nukualofa, do it in New York!'

The king allows freedom of worship. Many Tongans have seen merit in joining the Mormon Church and getting higher education in the United States. Some Fiji Indians have migrated to Tonga and they practice Hinduism without any problem. Tongans seem prosperous enough with tourism and fisheries, not to bother to pluck the coconuts from the trees that cover the island. Coconut tree climbing is just a sport. By the time the coconuts fall and get collected, they sprout and cannot be used for oil.

Tonga lives up to its old name, 'Friendly Islands' and its king is the symbol of that friendliness. He is fond of protocol, but bends it occasionally to present a friendly image.

T P Sreenivasan was high commissioner/ambassador of India to Fiji from 1986 to 1989.

Earlier in the series:

'India is in his marrow'

A colossus who died alone

Dixit was short, his presence was gigantic

T P Sreenivasan can be reached at ambassador86@hotmail.com and tpsreenivasan@gmail.com