'There is no future in importing weapons' 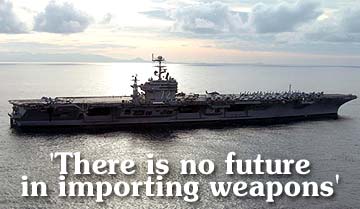 I would go to the extent of accepting slightly reduced capability for the Navy, provided it emerges from our own technology and contains the potential for a Mark II (improved) product," Admiral Arun Prakash tells Bharat Verma, Editor, Indian Defence Review in the third part of the interview with the Chief of the Naval Staff.

Part II: 'Time is running out'

Is the Navy satisfied with its air assets after taking into account the present force structure and the likely spread of operations? Is it not desirable to give more attention to naval aviation in its totality, not just carrier borne elements?

We perceive aviation as a very potent instrumentality of maritime power, and there is no doubt that it must be commensurate with our overall responsibilities. In this context, we do look at air capability requirements, integral to the Fleets, carrier-borne, as well as shore based, as part of the Navy's overall aviation plan.

We have already formulated a naval aviation plan, which will cater to our needs for the next two decades and it is awaiting government approval. Under this plan, we will induct various aircraft, both from indigenous sources and from abroad in a phased manner.

This is a particularly exciting area, as several next generation aircraft like the MiG 29K, the LCA (Navy) and the ALH will be inducted in the coming years. The reconnaissance force levels available to us, however, are not adequate for the vast ocean areas, the dense shipping traffic and the submarine threats that we need to keep under surveillance. We are looking at various options in this context.

India is a declared nuclear weapons power committed to the 'No first use doctrine.' This implies a retaliatory/second strike capability. How do you see the Navy's role in the nuclear triad?

All I wish to say here is that the draft nuclear doctrine, which was made public by the government, envisages the deployment of a triad of capabilities. It is also a well-known fact that an undersea deterrent capability is the most survivable leg of the triad, and hence should form the core of a credible second-strike capability.

How do you see force levels to be maintained/ augmented with state of the art warships and systems fitted on them? In this, what do you perceive the role of the industry especially in the private sector?

The Navy has been ahead of the other two services in the drive to build indigenous capability in shipbuilding as also of systems and equipment. So far it has been predominantly limited to PSUs.

Now that the government has permitted private sector participation (with 26% FDI) in the defence sector, has the Navy taken or planned to take measures to optimise the potential due to this directional shift in the policy?

In principle, we welcome the jettisoning of the Industrial Policy Resolution of 1955, and entry of the private sector into defence production. Our PSUs could certainly do with some healthy competition to enhance their efficiency, productivity, and above all, product support.

Last year we started a 15-year programme to undertake indigenisation in the Navy and this will provide tremendous opportunities for the private sector to participate in defence production.

Procurement procedures have been simplified and made more transparent. The Navy is also willing to fund R&D projects, which need huge investments and infrastructural support.

Even for ships being procured from abroad, we are looking at Indian companies supporting them with indigenous technology. Standardisation of inventories is being ensured and this will also help address the private sector's concerns about volumes.

The IT sector, where we have a known world-class capability is also an area where the private sector can participate and indeed, is participating. Moreover, with the order books of all the major PSU shipyards full, there are opportunities galore for the private sector to market their products.

The Navy has made considerable and substantial progress in the indigenous design and building of warships. However, the major weapon systems to be incorporated in the indigenous warships are still to be acquired from abroad.

The writing on the wall is clear for the Armed Forces to read: there is no future in importing weapon systems from abroad.

It is a trap, which creates a vicious circle of dependence on unreliable foreign sources and spiraling prices.

I would even go to the extent of accepting slightly reduced capability for the Navy, provided it emerges from our own technology and contains the potential for a Mark II (improved) product.

Viraat to be armed with 'Baraak' missiles

There are several success stories from the DRDO, and the development of world-class indigenous sonars is one of them. We are also well on our way to designing combat management systems and work is proceeding well on developing an indigenous Anti-Submarine Warfare system as well as several types of radars.

The second approach that we in the Navy have decided upon is to collaborate with friendly countries in the technology development and subsequent production of advanced weapon systems. This is as distinct from the screwdriver, CKD/SKD approach that has come to be known as 'Transfer of Technology.'

There are some such projects, which are currently in various stages of discussion / negotiation. This approach has the dual advantage of obtaining access to advanced technology as well as ensuring that we do not subsequently remain at the mercy of another country for spares and servicing support.

Finally, instead of looking at indigenisation in a generalised sporadic fashion, and appealing to industry for help, we are seriously considering the creation of a structure within Naval Headquarters to give it full-time focus and impetus. But this will require financial empowerment by the government.

As the industrial base (both in the private and public sector), for indigenous shipbuilding grows and matures, do you think there is a need to build up strategic partnership with original equipment manufacturers (OEM) to undertake major overhauls of equipment and platforms?

Do you see any beneficial spin-offs if captive capabilities are created to meet infrastructure requirements?

We are already doing this and have several tie-ups with public and private sector players in some areas like maintenance of COTS (Commercial Off The Shelf) equipment and specific systems. We have also been off-loading the refits of less weapon-intensive ships like OPVs and Fleet Tankers to trade.

However, at this moment, we simultaneously need captive capabilities like the Naval Dockyards, as many of our maintenance needs are unique and require skilled manpower, whose capabilities are built over years of experience -- submarine repairs, for example, cannot be outsourced, except perhaps, to the OEM.

Moreover, in times of emergency or war, we will need to have the wherewithal to step up the pace of repairs or carry out emergency repairs, as the case may be.

Hence, the spin-off to the Navy is in terms of the flexibility of operations that a captive maintenance capability provides.

Having said that, I must admit that in other countries there is profound trust between the government and Industry, and even strategic systems are entrusted to the private sector for manufacture/maintenance.

We have not reached this happy state yet.