'What do diplomats do?' 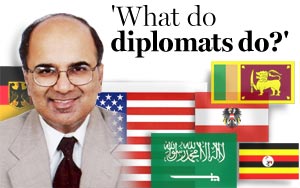 This was the subject on which I was to speak to a bunch of bright American high school students who had assembled at Berkley for a summer programme.

Contrary to popular belief, summer can be a demanding season for the driven students in the American system. There is an infinite range of activities to chose from: go to Europe, hitch-hike or mountain climb, be an intern, take extra courses or cultivate an interest.

There are drifters, of course, in these parts known as the 'California slackers', but there are others who are seekers and strivers. The group of students, I was addressing were clearly in this category, from all over the US, brought together to learn about diplomacy and international relations.

The choice of San Francisco was especially appropriate this being the 60th year of the founding of the UN and it is in this city that the UN charter came to be written, negotiated and signed.

I have done a fair amount of UN related work in my time and would have spoken with ease about it, had the organisers allowed it. But they had more interesting ideas. The students want to know what you do as a diplomat, they said. So did the students, when I gave them the choice. This set me thinking.

Any diplomat knows that what he does is not easy to explain in simple or clear terms. A doctor, a teacher, an architect won't have this problem, asked the same question: 'What do you do?' In fact his vocation entails that such a question is not asked.

A nuclear physicist, a stem-cell biologist, a semi-conductor designer will have problems explaining, but then it is readily conceded that her area is so inaccessible so as to make the question almost impudent. But some professions are in the public domain -- editor, director, politician -- and yet fuzzy and nebulous to explain. A diplomat is in a similar position.

Faced with this challenge I asked the group of students what they thought a diplomat does.

'Diplomats work at securing world peace' said a blonde girl with a ponytail with great earnestness. She is headed for the Oxfam or 'Save the children'. I nodded solemnly.

'They resolve conflicts between nations' said another girl, who looked Korean-American. I have begun to notice how these days those who raise their hands first are all girls. Her Korean antecedents must have made her particularly alert to 'conflicts', I surmised.

'It is more than that' said a boy in the third row. 'They safeguard national interests'. He looked of Indian or Pakistani or Bangladeshi origin. Who can tell? In any case, it is heartening to see that in any group of talented youngsters in America every shade of ethnicity is represented.

I had to start my lecture and I took stock of the answers. Am I securing world peace, resolving conflicts, advancing core national interests, I thought. Perhaps, I am. It was a comforting thought.

'But, what do you do in your office, everyday?' this was again a girl with an impish look, a type that you come across in every group of students. This was a reality check. 'Am I advancing world peace, at work in my office? Who. Me?' A sobering moment.

'Good answers. I think a practising diplomat essentially works at facilitating contacts, communication and cooperation between the country he represents and the country he is serving in', I said summarising for myself what I do in my office on a day-to-day basis.

The interaction with the students had made me cast my eye on all my years as a diplomat and how I would characterise the nature of my work. Yes, I thought facilitating contacts and communication is what I have done in my practice most of these years.

The content depends on where you are and at what point in time.

As a young diplomat in Germany on my first training posting some decades back, cross-culture communication was my big challenge. Those days business delegations from India were full of general chatter and abundant goodwill, but without the samples, the price, or the delivery schedules of whatever they were trying to export. The Germans on the other hand were all brisk and bristling efficiency: no time for talk about Wily Brandt, the Berlin Wall, World Peace which were the subjects on which our exporters of shoe uppers or manhole covers wanted to dilate.

German tourists on their part came to us asking for application forms or even contracts to sign to visit ashrams in India or lawyers to go to if cheated by their potential Guru. These were the days when Germans were serious about their spiritual hunger but even in their esoteric pursuits, they were as driven by efficiency as we were dedicated to ease.

All this has changed of course, but at that point in time and in that station and in my position, my task was to make contact and communication between these two alien cultures possible. And what did I bring to the job? Understanding of my country, familiarity with the host country including its language and a fervent desire to bring the two together.

Years later, I was in Saudi Arabia. The fascination with Indian gurus and exotica was not a priority, in fact these subjects were a taboo. Part of my job was to follow the international oil trends and the prospects for India to get its share of business in the growing Saudi market. The cross-cultural insights that one conveyed to visiting Indian delegations were very different from Germany. Not to rush, not to fuss, not to insist on contracts, but to build trust. A different place and a different perspective.

Since then I have done many countries, each has been different and there are many tales to tell. The context and the content has varied. If in Europe the interaction was to get development assistance, in Uganda it was to offer such assistance. If in Vienna all my talk at the International Atomic Energy Agency IAEA was on matters nuclear, in Colombo the discourse was about terrorism, self-determination or devolution.

India has changed so much that my old parables have become obsolete and new paradigms need to be internalised. But the craft of diplomacy remains the same: contact, the search for cooperation and inter-cultural communication as an essential tool.

In my present locale, in California, all this acquires a fascinating dimension, which I am exploring in these columns. Curiously a group of eager and expectant young faces had brought home to me the truth that what a diplomat does is also to know a trick or two about how to operate in another environment while being committed to his own.

Reversing the call culture
How to become a millionaire

B S Prakash
SHARE THIS STORY
Print this article