How to become a millionaire!' 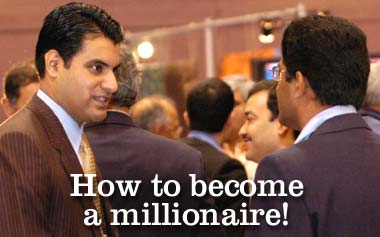 How to get your first million?'

'Where to get your first million?'

Placards and banners asked me in-the-face, a style for which California and its Governor Arnold Schwarzenegger are famous. I had heard of such Hollywood titles, but this did not look like a movie hall.

Further, a million may have been an aspirational figure decades back, like in the old Hindi movies in which good old Om Prakash drooled over a lakh. Today, millionaires are a dime a dozen in the Silicon Valley just as there is no lack of lakhpatis in India. But this did not look like a film production, or like a scam. What was this then?

"Are you with tie?" I was being asked, by this young and attractive 'Indian-American lady' -- as Pravasi Bharatiyas in America are being called -- herself in a smart corporate suit, slim, elegant and the essence of corporate womanhood. The very embodiment of the title Ms.

Yes, I was with my tie, in fact my best Zodiac one. But why is she asking me, I thought, can't she see? Besides this was California and that too Silicon Valley, where to be tie-less was almost de rigeur. Corporate bankers on Sand Hill Street, the Silicon Valley version of Wall Street, wore pastel coloured shirts. Their clients wore T-shirts and some wore shorts and sandals.

Then I saw. Big banners that announced -- 'Be with TiE,' apart from urging you to make your first million fast, in the next hour, and to change the world, say in the next four hours. I was at TiECon, the annual convention of the 'TiE' in Santa Clara, one of the biggest coming together of pure brains.

As the Indian consul general in these parts I was being welcomed to TiE, with or without a tie. But since I am trying your patience and am about to lose you -- What is TiE? A little background is in order.

At the beginning of time, which is almost ten years in Silicon Valley, a group of young and hugely successful Indian entrepreneurs got together. Here were they, many having 'made it' first to IITs or IBMs, made it once more to the Valley, further made their first millions (in dollars), brimming with ideas and ideals.

Having transcended the middle class aspirational level they had reached a stage of wanting to help others. Not for them, the mere employee status, even if in the Microsofts or Intels. Entrepreneurship was the leitmotif. Maybe the Silicon Valley spirit had something to do with it. This was a unique place where brilliance, ideas, money and markets came together, what in management jargon is called the eco system for entrepreneurship. This was the beginning of TiE: 'The IndiaUS Entrepreneurs.'

As TiE grew its creed had an attraction not only for the Indian videshis but for others as well. Like the mutation of a computer code TiE came to be called 'The Indus entrepreneur' and later transcending all geography as 'Talents Ideas Enterprise.' It is now just TiE, as confident of its status in the corporate world, as the other tie is in the sartorial world.

TiECon as the annual congregation is known has one purpose: to bring together those who have ideas and money -- not only one, but both are required -- and in addition have a 'can do' attitude. Enough of an introduction. To get back to my experiences...

The whole ambience was vibrating with energy, alien to a non-entrepreneurial spirit like mine. It was 8 in the morning but the crowd was all rearing to go. Even the language around me was all charged up.

Delegates were being 'incentivised' to go into the main hall. Networking was no doubt the name of the game, but keynoters were not to be ignored. The paradigm was about to be changed and synergy... well synthesised. Thought leaders were ready to lead. Mentors were ready to monitor. The search engine for talent was being spurred, the business model was buzzing and above all value was being created. The sheer energy made me perspire.

Is value different from wealth? Is innovation different from imagination? Is entrepreneur different from adventurer? Caught up in the ambience I too was energised and synergised. I thought I was about to get my first million, loved by angels and cosseted by venture capitalists.

I was forgetting that I had no ideas, skill, and above all utterly bereft of ambition. But around me ideas and initiatives swirled and the mood was heady even without the spirits. I heard snatches of conversation in a language like none that I had heard before in a coming together of Indians and believe me, I have had my share of such conferences of expatriate Indians.

As is customary in such congregations in other parts of the world, no one was talking of the price of land in Gurgaon; no one was complaining about the corrupt Indian customs, no whisper about how difficult it was to find a good Kayasth bride. This was something else altogether.

'My aim is to create a platform which will do triple convergence' said one. 'Blogs are where the future is. We can out google Google with a platform for a blog search engine,' someone else was saying and he looked as if he was just out of school.

'The problem is with scaling. We have scaled in Chennai but Shanghai is another issue,' I heard and something within told me that he was not referring to climbing the Great Wall of China.

'We are zeroing on the angel investor. Once we do that the venture capitalists are in line,' was a confident voice from behind. 'The bandwidth is licked. But I am worried about the connectivity,' was the plaintive cry somewhere else.

Does this make sense to you? Yes? Which IIT did you go to? Does not make sense? Sorry. Join the club of illiterates in a fast changing, globalised and flat world. This indeed was the theme of the New Guru Thomas Friedman of The New York Times, who having discovered that the 'world is flat' is now proclaiming it to startled readers and audiences all over the US.

He was the keynote speaker at TiECon. Having seen the energy, ambition, confidence, and the genetic code that has produced all this I can do no better than conclude with the story that Friedman repeated.

"When we were young kids growing up in America," said Friedman, "we were told to eat our vegetables at dinner and not leave them. Mothers said, 'think of the starving children in India and finish the dinner.' And now I tell my children: 'Finish your maths homework. Think of the children in India who would make you starve, if you don't.'"

The crowd loved it. I was not so sure what the right response was. But San Francisco is not all only about IT and enterprise, I told myself. It is also about fun and frolic, culture and compassion, gays and grace. I must look at these as well.

B S Prakash is the Indian Consul General in San Francisco and can be reached at cg@cgisf.org

B S Prakash
SHARE THIS STORY
Print this article