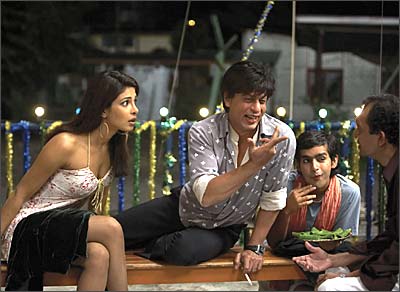 Farhan Akhtar released the soundtrack of his Don remake a week ago, and the remixed Shankar-Ehsaan-Loy version is having a hard time comparing to the Kalyandji-Anandji classic.

We asked readers what they thought, and your responses were almost unanimous: readers feel the new soundtrack -- which rehashes the original tunes -- doesn't match up at all.

And while we can't get over comparing Udit Narayan's version of Khaike Paan Banaras Wala to Kishore Kumar's immortal original, here is a still from Shah Rukh Khan and Priyanka Chopra's version of the Amitabh Bachchan - Zeenat Aman classic.

The tributes seem well in place, anyway. The setting seems completely out of the 1978 classic, and film fans would note that the pattern on Shah Rukh's shirt is uncannily similar to that of the Big B's waistcoat in the original film.

Pix: How different is SRK's Don

Just how much magic will the new film recapture? Lets wait and watch.