Look who's back! 27 years after he first made an appearance, the Don returns with a new face, body and attitude.

The first one featured Amitabh Bachchan in the title avatar. Directed by Chandra Barot, it co-starred Zeenat Aman and Helen. The jazzed up remake, under Farhan Akhtar's direction, stars Shah Rukh Khan as the Big D. Giving him company are Arjun Rampal and a bevy of beauties -- Priyanka Chopra, Kareena Kapoor and Isha Kopikkar.

What about the music?

The inventive troika of Shankar, Ehsaan and Loy step into Kalyanji-Anandji's shoes to dish out a mix of funky originals, inspired remixes and a bunch of hip instrumentals.

The album kickstarts with Main Hoon Don, which is one swanky BMW of a song. Be warned though, this is an all-new track and bears no resemblance to its bouncy predecessor of the same name. Its Matrix-inspired twisted tunes suggest a hint of rave, techno, industrial rock and new age. Fortunately, it's not a case of all noise, no melody. Shaan does a credible job behind the microphone, but a heavier baritone would do more justice to the high drama enveloping this number. 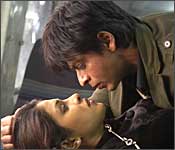 The 'Funcinternational mix' of the track is pumped up with advanced doses of electronica, resulting in an ideal nightclub concoction.

Yeh Mera Dil starts off loyally, but betrays the original altogether with its technophile arrangement and extravagant beats. Truth be told, this piece filmed on Kareena Kapoor is a complete letdown. Lacking charisma and mystery, forget holding a candle to the Kalyanji-Anandji classic, it doesn't even stand as a rocking remix. The usually confident Sunidhi Chauhan appears to be conscious of inevitable comparisons to Asha Bhosle's version of the same. Hopefully, Bebo's glamorous moves on-screen will prove to be distracting enough.

If you are a purist, Khaike Paan Banaraswala is unlikely to impress you. To Javed Akhtar and the composers' credit, they incorporate a few changes to the oldie with an orchestra and SRK's special appearance. The actor breaks into an impromptu limerick. Good gimmick, but not interactive enough. Though entertaining and effectively rendered by Udit Narayan, Khaike doesn't have the rawness or unstoppable enthusiasm of the original Kishore Kumar superhit.

In comparison, the Shankar-Ehsaan-Loy original, Aaj Ki Raat is quite the charmer. Trendily 1970s in flavour, it echoes the swinging effect of westernised compositions from that decade. Alisha Chinoy, Mahalaxmi and Sonu Nigam infuse an aura of biting suspense and wicked fun into this snazzy creation. 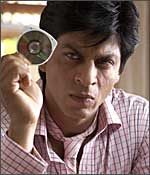 The timing of Mourya Re couldn't have been any better, what with the ongoing Ganesh Maha Utsav festivities. A fairly ebullient track, it gives SRK a chance to show reverence and respect towards Lord Ganesha in his own filmi style.

This lavish enterprise has a little bit of everything. An eclectic mix of old, new and everything in between; Don is an unusual presentation of old wine in new bottle.