How time flies, and yet -- like Alice on her Wonderland treadmill -- remains firmly anchored in place.

Twenty-eight years ago, when Superman first flew across the collective consciousness of moviegoers under the helm of Richard Donner, he announced his superpowers by saving the love of his life, Lois Lane, from a crashed helicopter perched precariously on the roof of the Daily Planet building.

All these years later, the creative helm has passed on to director Bryan Singer (The Usual Suspects and the first two X-Men movies). And now, too, he announces his presence by saving Lois from an out of control space shuttle that threatens to take off into the stratosphere with its mother ship in tow.

Helicopter to space shuttle -- as signalling the passage of time -- it is a comparison that cuts to the heart of Superman Returns.

With the film, Singer joins Sam Raimi (SpiderMan, SpiderMan 2) and Christopher Nolan (Batman Begins) in the list of Hollywood young guns pressed into service to revive iconic superheroes, to repurpose them for a modern generation (DC Comics president Paul Levitz told us reporters during a briefing in Los Angeles earlier this month that the process really began with Tim Burton's Batman Returns, in 1992).

Raimi and Nolan had it easy. Their heroes were etched not in shades of blinding white, but in neutral gray with enough darker edges to make them appealing to a world where success is measured in neuroses accumulated during your climb up the ladder.

Singer, though, has to contend with a one-dimensional hero, one whose squeaky-clean lines, which worked in comics and television during the Great Depression and post-War years and on the big screen during the Cold War, becomes a tough sell in a world drawn to the dark underbelly of its pop-culture icons.

That defines the dilemma for Singer: How to re-imagine Superman for the Prozac generation, while not tampering with the familiar mythology?

Singer, and scriptwriters Dan Harris and Michael Dougherty, set out their stall by painting a picture of an alien in search of 'home.' The back story has Superman flying off in search of his native planet Krypton. When the movie begins, the superhero has landed back on earth after a five-year absence on the Kent farm in Smallville, Kansas, where foster-mother Martha (Eva Marie-Saint, Oscar-winner for On the Waterfront) finds him amidst the ruins of his spacecraft and gives him back his Clark Kent sense of belonging.

All this against extended pastoral scenes flashing back to the past that make you wonder if the film should be titled Superman Begins.

Having gotten his emotional grounding back, Clark Kent goes back to Metropolis, and gets his old job at the Daily Planetback from editor-in-chief Perry White (Frank Langella). Within minutes, he is reunited with old pal Jimmy Olsen (Sam Huntington), the Planet's staff photographer.

It takes Olsen mere minutes, and one drink, to turn Kent's world topsy-turvy again. Lois Lane, Kent learns, has channelled the hurt and rejection over his unexplained vanishing act into a Pulitzer Prize-winning editorial: 'Why the world doesn't need Superman.' She has also acquired a fiancé (Perry White's son Richard, played by James Marsden) and an asthmatic five-year-old son Jason (Tristan Leabu), not necessarily in that order.

Singer, Harris and Dougherty use this plot point to provide nuance and shading to the new Superman. As the superhero, he has to wrap his head around the fact that the one-time chronicler of and participant in his deeds thinks he is no longer relevant; as Clark Kent, he has to watch her cosy up, in the newsroom and beyond, to Richard White.

The device of having her being engaged, but not married, permits the writers and director to build in an undercurrent of romantic yearning between Lois and Superman; to stoke fresh fires from the embers of the stalled relationship.

The return of Lex Luthor (Kevin Spacey), Superman's perennial foil since his introduction via comics in 1940 and his memorable onscreen delineation by a manic Gene Hackman in 1978, completes the set-up. Luthor has gotten out of jail thanks to the fact that Superman didn't make it to court for his parole hearing.

He has scammed dying widow Gertrude Wanderworth (Noel Neill, another familiar face from the 1978 Donner classic) out of her fortune; he has, with help from tech-savvy henchman Sanford (Indian-American actor Kal Penn) divined the location of Superman's Fortress of Solitude and cracked its secrets, and he is now ready to come into his villainous own.

The core of the villainy harks back to the 1978 original; specifically, to this piece of business:

Lex Luthor: Miss Teschmacher, when I was six years old my father said to me...

Miss Teschmacher: Get out. 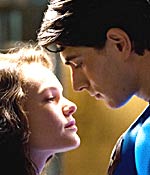 Lex Luthor: Ha ha. Before that. He said, "Son, stocks may rise and fall, utilities and transportation systems may collapse. People are no damn good, but they will always need land and they'll pay through the nose to get it! Remember," my father said...

Singer takes extreme pains to keep the film firmly rooted in the past -- fans of the canon will recognise a couple of dozen dialogues, at the least, from the Donner film, and an equal number of visual references.

On one occasion, the two combine -- in the scene where Marlon Brando, as Jor-El frozen in time in the Fortress of Solitude, reveals secrets to Lex Luthor under the 'assumption' he is his son, Kal-El. The footage was shot by Donner for the sequel to the 1978 film, and revived from the archives by Singer for this movie.

Thus much for the plot -- to reveal any more will play spoiler; suffice to say that its climax, in more ways than one, sets up its own sequel(s).

What works for the film, above all else, is the spectacular aspect. Singer, as he showed through his two essays with X-Men, has a highly developed visual style that is evident in every frame of Superman Returns -- his use of the state-of-the-art Genesis digital camera system and 70mm format, visual effects and stunt work is riveting.

Singer's ally in this is cinematographer Newton Sigel, who has worked with the director earlier on X-Men and X-2 and by Guy Dyas, whose production design is in tune with the sumptuous visual aesthetic of the film.

For the first time, you really will believe, as the tagline for the 1978 film challenged you to, that man can fly.

It is even more spectacular in the IMAX 3-D format. To have Superman zoom towards you, close enough seemingly to reach out and touch, is an experience for any fanboy.

In IMAX theatres, 20 minutes of action footage comes in 3-D; director Bryan Singer explains his selection of the 20 minutes quite simply by saying, "When Clark Kent takes off his glasses and becomes Superman, you put your 3-D glasses on."

Staying with the theme of keeping the film rooted in the identifiable past is the music. Composer John Ottman (winner of the BAFTA award for editing for Singer's breakout Usual Suspects) recycles themes composed by John Williams (Oscars for Fiddler On The Roof, Jaws, Star Wars, ET, Schindler's List, and most recently nominated for Memoirs of A Geisha and Munich) for Richard Donner's 1978 Superman.

Brandon Routh reprises Christopher Reeve to uncanny effect. While he is eminently believable as Superman Redux, Routh, however, fails to add anything of his own to the character's re-imagining, and therein lies a weakness. 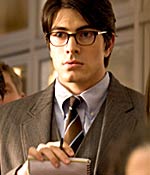 Again, while Reeve played Superman with a nod and sly wink to his audience, Routh plays it straight and serious -- and is paradoxically a tad less believable, as a result.

Kate Bosworth as Lois Lane has a more nuanced role than Margot Kidder did in the 1978 original. Her professional success and resulting confidence, her son, her fiancé, and the flame that burns bright yet for Superman provide Bosworth with more scope than as mere arm-candy and occasional passenger on the Superman airline.

Kevin Spacey, on the other hand, has a cardboard cut-out Lex Luthor to work with -- depth in characterisation is clearly not Singer's forte. Spacey plays him with manic energy, tending towards the dark underside with only occasional forays into camp, and manages in some measure to rescue an indifferently written role.

Overall, it is tough to know what to make of the movie -- it depends not so much on the director and the cast, but on what you bring to the theatre.

When I was asked by my editor to go to Los Angeles for the preview, my reaction was ho-hum, been there, done that, even wore the T-shirt so what else is new?

Familiarity breeds boredom -- and of late, there's been a glut of superhero movies of variable quality. It's almost as if a world no longer competent enough, or confident enough, to deal with real life problems has turned en masse to the realm of the fantastical; as if a world lacking power to solve issues of its own creation fixates on superhuman strength and the consequent ability to make it all go away by merely fluttering a cape.

It is in that cynical frame of mind that you strap yourself into your seat. The theatre goes dark, the opening credits whoosh past in a style patented by Donner all those years ago, when you were young and wanted so badly to believe.

And before you know it, the end credits are rolling. You look around sheepishly, wondering if the hardened journalists on either side of you noticed your slack jaw, your wide-open eyes with the wonder etched deep like so much kohl, and you find them looking as sheepishly right back at you, with the same expression reflected in their eyes.

You never know when the magic begins, or how, or why -- you only know that if you remember to take the critical glasses off, the magic does begin. And when it does it sweeps the world-weariness out of you, it transports you to a different age when you were young and the world was fresh and pregnant with infinite possibilities; a world in which Santa Claus squeezed through the window every year, a world in which a masked man in a cape not only existed, but came to you when you called, to soothe the hurt, to stroke away the fears.

In that theatre, for those brief moments of time between the dark and the light, you can be blessedly young again; indescribably carefree again.

Or you can turn to your neighbour and you can smirk -- what, there's a planet on the verge of extinction, and I am supposed to believe Clark Kent changes out of his suit and into his cape, then whips out his comb, carefully parts his hair the other way, and crafts a spit-curl carefully onto his forehead before zooming off to the rescue? Come onnnnn!