The making of Superman Returns 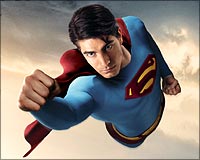 Much of the principal photography for Superman Returns was done on location near Breeza, Australia, on a rural piece of farmland that had been transformed into a working back lot.

Six miles of road, constructed by the production team, provided access to the base that consisted of star and filmmaker trailers, catering and lunch tents, and trailers for every department; it was equipped with an IT trailer capable of running an entirely wireless network in the middle of the Australian bush.

The Kent farm was situated near the country town of Tamworth in New South Wales. Production designer Guy Hendrix Dyas recreated in great detail the Kansas home of Jonathan and Martha Kent, where Clark grew up as a child; highlights included a 30-foot barn and five acres of six-foot tall corn, planted from seed.

"Growing the corn out in Tamworth was a huge challenge," says Dyas. "That particular region of Australia had been suffering through many years of drought.  We had to create our own irrigation system just to keep our Kent Farm crops alive until the end of our shoot. It was quite an incredible achievement, and our corn fed many of the local farm animals when we finally packed up and left. It was very labour-intensive having to build so much in the middle of nowhere, but I think (producer-director) Bryan Singer and I achieved what we had envisioned and it certainly allowed some beautiful moments to be captured on film."

The goal was to update the Superman world, not re-invent it.

The crew then shifted to Fox Studios Australia, in Sydney, and occupied all seven soundstages. At one point, space got so tight that Dyas was forced to turn one of his construction warehouses into a stage in order to accommodate the interior set of the film's 200-foot yacht, The Gertrude.

"We probably ended up with close to 80 sets," says producer Gilbert Adler. "As challenging as that was, there were no other movies being shot on the lot so we were able to take it over and make it completely our own space. It gave us a great amount of flexibility and creativity in scheduling and construction, which was paramount to having all the sets look and function fantastically."

Singer knew there were other places in the universe he wanted to include in his return story, most notably the interior, exterior and rooftop of the Daily Planet building as well as the Fortress of Solitude.

Dyas took inspiration from the 1978 sets by John Barry, and constructed a 'crystal ship' for Superman, which measured 150 feet wide by 135 feet deep, and was approximately three stories high.

"This set was deliberately reminiscent of the crystal pod that carries Superman to earth in the first Richard Donner film," says Dyas. "However, it's been incredibly updated and brings to mind the science experiments many of us did as kids when we made crystals grow. Superman uses his own 'Crystal technology' to create the ship and I think the end result looks very unique and elegant -- it glows internally and is beautiful, yet unearthly.  We used similar design principles to create Superman's Fortress of Solitude and, with the help of new technology, were able to push the crystal idea much further in its execution. For example, instead of seeing the Fortress of Solitude from only one direction as in the 1978 film, we were able to create a 360-degree view enabling Bryan to pan the camera around this amazingly vast cathedral-like environment. It was spectacular."

Dyas created a unique design for the Daily Planet building under the operating theory that, like many classic Art Deco buildings in New York, the building in Metropolis would have been renovated in some fashion over the years to keep up with the latest in news-gathering and publishing technologies. The set took six months to design, four months to build and a month to light.

"Early in pre-production, we did some research and visited the original Daily News building in New York which was designed in 1929 by Raymond Hood," says Dyas. "That marvellous period of American Art Deco architecture was hugely influential on my designs, especially for the interior of the editorial office of the Daily Planet. And even though we wanted the film to be contemporary in style, I was inspired by the 1930s mode of geometric designs, glass and bold colours."

The plaza set that Dyas needed to create outside the building was so large that none of the Fox stages could accommodate it. So, in an unconventional move, the filmmakers decided to build the set outdoors, using the road between two existing soundstages. "The weather was fantastic and we were able to fill the nearby roads with yellow cabs, buses and other street traffic. We also transformed an adjacent area into a mini Central Park and added a subway station. It was definitely one of our most challenging sets to build, but it turned out beautifully," says Dyas.

In addition to the yacht, Dyas created two other sets that were completely unique for Superman Returns -- an intricate model train set built in the basement of the Vanderworth mansion, along with an enormous island set that was simply referred to as New Krypton.

"We were extremely meticulous when it came to details," says Dyas, "because, when Lex destroys the train set with his crystal experiment, it's a metaphor for the destruction he intends to achieve on a human scale. Our train set was already enormous by regular standards, but since it needed to look even bigger, we built a basement set around it using forced perspectives and other design tricks. We used three different scales of miniature trains, using the largest ones in the foreground near the camera and the smaller ones in the background."

Included in the many vignettes of the train set are environments as diverse as a cacti-filled Arizona desert, a gleaming skyline of Metropolis and the snow-peaked mountains of the Swiss Alps.

The same blending of classic and cutting edge went into the film's costume design. First and foremost on everyone's mind from inception was the Superman costume. Singer wanted the suit to reflect not only the iconic image that has lived in culture over the ages, but also bring a contemporary edge to the character.

It was crafted out of a dyed-blue, skin- tight fabric called Milliskin, under which a contoured muscle suit would be worn. The famous 'S' shield is made of a moulded latex relief that was then laser-cut with thousands of tiny 'S' insignias. The cape's lining was made of wool and specially milled in France. It was then given a treatment that gives the centre of the cape its vibrant red colour.  The outside was rubberised to give it some texture and weight.

"Many times, I felt more like an athlete than an actor," he says. "Hanging 50 feet in the air or holding my breath 15 feet below water wearing a very constricting costume put tremendous stress on every part of my body, especially when we did those scenes all day long for many days in a row. As crazy as it sounds, I adjusted and my body got used to it."