Superman III and IV are extremely disappointing films that sank the Superman franchise, and are not recommended at all. Still, in keeping with a look back at the original films, here's a brief peek. Watch only if you're determined to see every Superman outing ever: 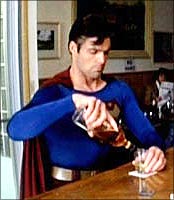 The third film was a bad idea from the very beginning. Gene Hackman had taken his Lex Luthor character far away from the franchise, after severe disagreements with the producers. Writer Mario Puzo, having penned the first two, had had enough of Supe, and wasn't sticking around for No 3. And the film was directed by Richard Lester, again.

Now, Lester's Superman II was perfectly passable, even -- thanks to Christopher Reeve -- quite fun, but things went disastrously awry in III. Lester, who directed The Beatles superbly in their finest cinematic outing, A Hard Day's Night (1964), is a master of slapstick farce. Faced with the daunting challenge of making a Superman movie all by himself this time, he went back to his roots.

A most unfortunate decision. Superman III was a ghastly film with a painful premise. Richard Pryor starred as Gus Gorman, an inadvertent, bumbling computer genius exploited by the evil Ross Webster (Robert Vaughn), and this was one helluva sorry excuse for a supervillain -- a pesky, clueless tycoon constantly harrowed by his sister Vera (Annie Ross), a domineering neo-Nazi with a bad haircut. The main villain in the feature was the computer, a gadget that could apparently do anything -- including defeat Superman.

Anyhow, Gus attempts to recreate Kryptonite and, by adding tar to the mix, creates an unstable compound that throws out man Kal-El off his rocker. Suddenly, Superman turns into a stubble-sporting bad guy, and the world eventually begins to loathe him. While the thought of an evil Superman has always been intriguing, the film handles it amateurishly, ending in a big yardfight between Superman and Clark Kent (yes, you read that right!), leading one to speculate on the trippy direction Lester was taking the film in. While that might have been well-suited to something like The Who's Tommy musical, it doesn't work at all for Superman, making this film quite a pain.

The only saving grace in Superman III has to be Annette O'Toole, who plays a great Lana Lang. Fans of hit TV series Smallville will recognise Annette, who plays Martha Kent on the show. Christopher Reeve is fine as always, but this is the worst Superman film ever.

Having said that, Superman IV: The Quest For Peace gives it a tough fight. The year is 1987, and Christopher Reeve is 35 years old. Considering the first film came around when he had just turned 26, Supe was obviously getting a bit wrinkled. Also, more inspired. With the three films and big red cape billowing firmly behind him, Reeve decided to write the Super-story himself this time. 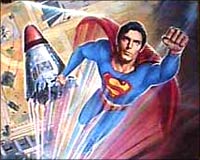 On paper, the idea seemed decent. He decided to use Superman to increase nuclear awareness. After some deep introspection provoked by a young student's letter to Superman, the Man Of Steel decides, to thunderous applause in the United Nations, to rid the world of nuclear weapons. Yet, despite having great potential -- imagine Superman's discussions with world leaders and a brief overview of the nuke threat for kids -- the film boils it all down to Superman gathering constantly launched nuclear missiles in a big outer-space bag and throwing them into the sun.

Lex Luthor, thankfully, was back. Hackman was around to exploit a caricatured set of global arms dealers (watch out for Jim Broadbent playing a Frenchman) and create a Nuclear-Man (Mark Pillow), one of the worst villains imaginable. Fashioned from a nuclear blast and a lock of Superman's hair, the most threatening characteristic of this solar-powered blonde goon had to be his dreadful nails.

Hackman's Luthor injected some breezy humour into the proceedings -- his Mozart-bonding with Metropolis prisoners is priceless -- but Superman IV: The Quest For Peace is a very poor film, further marred by budget cuts and crippled special effects.