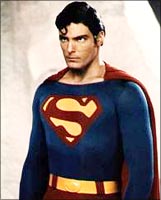 Dad, where are you?

The answer is a troubling one.Superman was made keeping a sequel firmly in mind, and to be made over just six months -- the closing credits of the 1978 original actually herald a 'Superman II: Coming next summer.'

But the Man of Steel was late. With a Lord Of The Rings-style idea of filming the movies back to back, director Richard Donner and the actors had already started work on the sequel when a disagreement with producers Alexander and Ilya Salkind threw things awry.

Donner was removed from the sequel, replaced with Richard Lester (best known for The Beatles' finest film, A Hard Day's Night). But with Gene Hackman (who played Lex Luthor) refusing to take part in Lester's version, the new film had to be pieced together from footage by both directors.

But Jor-El would have none of it. Marlon Brando -- who was paid $4 million for about 15 minutes of screentime in Superman -- successfully sued the producers, and made sure his scenes from the sequel weren't used in Superman II. (His lawyers also amazingly made sure he made a cut of the profits, even though he doesn't appear in the film, but then that's Marlon for ya.)

This was an absolute shame, for while Superman II opens with a flashback of the great film that was, this too is Brando-free and sets a contrived tone to the whole show. Especially after the first one relied so strongly on a superb father-son bond.

We open again on crystalline Krypton, where we see the three miscreants from the original film exiled to a rather flat existence in outer space. Back on Earth, however, things are anything but boring -- Clark Kent, who reads Dickens instead of watching television ('it's too violent') finds the Daily Planet offices even busier than usual. A bunch of terrorists have a hydrogen bomb up the Eiffel Tower, and top reporter Lois Lane 'has been Concorded' promptly to Paris, gunning for a Pulitzer. 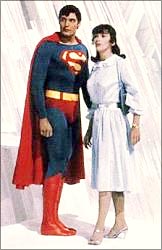 Margot Kidder, seen here with Christopher Reeve in Superman, might not have been Superman-worthy in the first film, but this time she is more than convincing as she gets into the meat of Ms Lane's character. Stiletto-clad and determined to get her Exclusive!, Lois, in her need for a closer look, manages to get right under the elevator on which the bomb lies. As she plummets to the floor, her blue eyed saviour pops up in time to grin and rescue her, flinging the big ticking device far, far into outer space.

The boom breaks the Phantom Zone, the flat prison that imprisons the evil Kryptonians, and they head gradually toward Earth. Three supervillains, with the powers to rival Superman? Ah, now this plot should work. Yet it doesn't quite do the job, thanks to a considerably weaker script.

Lois and Clark, on the other hand, work magnificently. While comic-book purists may gasp in apprehension as Lois gets within sniffing-distance of realising that Clark is Superman, the audience is constantly incredulous that the spectacles are a sufficient disguise, and can't wait. With great panache, she tosses herself into the torrential waters of the Niagara -- and you smile because you can see what's coming.

Only, you can't. Clark doesn't rip out the 'S' and pluck her from the lethal waves, he panics and makes his way to the shore, yelling out nervous encouragement and flubbing up completely as he falls in trying to fish her out. It's just another of those moments Christopher Reeves makes work, and Kidder splutters fabulously as the bewildered Lois.

Yet, this is the film where Lois discovers the truth. 'We'd better talk,' says a stunned Clark, finally. 'I'm in love with you,' she replies. He grins, slightly bashful as he says, 'We'd really better talk.' But the son of Krypton soon finds his feet as he flies Lois to the Fortress of Solitude.

Meanwhile, back in the world without love-tinted glasses, the three Krypton freaks spend far too long terrorising a small part of Houston -- though admittedly their leader General Zod (Terence Stamp) has a nice walking-on-water moment. They head to the White House, and soon the world abdicates to their control. Is there anyone in the world to challenge their supremacy?

Lex Luthor doesn't know, but latching on to an opportunity before it exists, the cunning baldy steps in as powerbroker. Hackman, unabashedly campy and armed with the best lines, ushers in the film's comic element. The actor didn't shoot for Lester's film, and all his footage is taken from Richard Donner's stock. Without doubt, this is some of the film's best part.

Despite the typically massive Earth-crisis, Superman remains a very human story, and this one is about the conflict between his destiny as a saviour and his romance with Lois. Clark decides to forego his powers -- by what we are informed is an irreversible process -- but misses them soon enough when pummelled by a bully at a diner.

These are intense parts of the story, but the film doesn't flesh them out, letting the audience visualise what must be happening off-screen as the many characters head towards the inevitable climax. The conflict and debate, the ethics and need of being Superman, are all ignored as the big man regains his powers (!) and heads back to fight his three enemies, the party starting in a chaotic Metropolis and ending up at the Fortress Of Solitude.

The plot, while built up meticulously (sometimes too much so for its own good), eventually unravels with hurried Superman-style ease. Things just fall into place as villains are beaten, memories are erased (the Lois bit is particularly sparingly dealt with) and all is well with the world -- even as Superman realises he must live alone.

Overall, while an enjoyable enough movie, this doesn't come anywhere close to Richard Donner's original, which set quite a super benchmark indeed. But Christopher Reeve takes this admittedly sub-par script to great heights, and while revisiting the actor in his iconic role week after week, I have increasing doubts about the new kid -- or anyone else, for that matter -- stepping into his big red boots.

But all is not lost. Margot Kidder, a couple of years ago, said there was enough footage left around to splice together a Richard Donner cut of the film. And director Bryan Singer, purist to the core, is going to use the unseen Marlon Brando footage in his upcoming Superman Returns, which he unofficially refers to as his Superman III. Hang on.