Salman Khan, on the rocks! 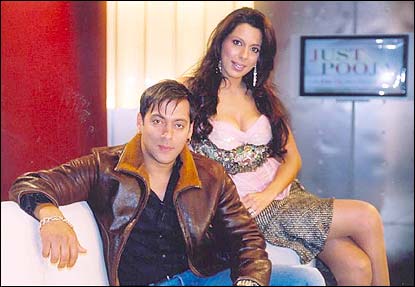 On the television channel Zoom's latest offering, things are set to sizzle with Salman.

Pooja asked Salman why he had started wearing rings on both ears. A smiling Salman quipped: 'After wearing two earrings, I have become more 'balanced!''

And Salman kept rocking, even as Pooja tried to provoke him by asking about a recent Hrithik interview, where Roshan said that Salman is 'always on the rocks.' Bedi asked if this meant Salman was always rocking, or did he like his drinks straight, with ice.

Smile firmly in place, Salman replied, 'That could be possible, or maybe since I live in Bandstand in Bandra (a sea-facing Mumbai suburb) he probably meant that I often sit on the rocks!'

The show was filled with praise for Salman from the film fraternity, including a Sooraj Barjatya letter from Indore, gushing about what a lovely human being the oft-misunderstood Khan is. Salman responded to all the praise by laughingly saying, 'They are all saying these things because they know I am getting old and they need to respect me. These days even children call me uncle! I must be getting old, and hence people have this newfound respect for me.'