Saif: My self-worth has returned 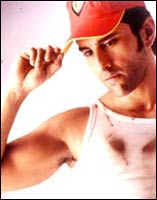 Till a while ago, life was beautiful for Saif Ali Khan. His solo hero film, Hum Tum, was a hit, and his latest, Pareenita, is doing very well in multiplexes.

"Parineeta is for my mom," Saif says. "I finally got to tap the Bengali side of me."

Even as he was grappling with his separation from wife Amrita Singh, his father Nawab Pautadi is in trouble with the law over a poaching incident.

"As his son, I'm really concerned," Saif says. "If my father has done wrong, then I guess he must be punished. But it must be remembered that he's 64 years old, and not in the pink of health. He wouldn't survive prison. And he has once been a terrific national hero on the field. I don't think he meant to transgress the law seriously. My Amma (Sharmila Tagore) is worried sick."

The actor, however, is relieved that Pataudi was granted bail. "I must say he handled himself with great dignity. Though Amma was hysterical with anxiety, my dad sailed through the ordeal. He just surrendered at the police station in a simple kurta-pyjama. For a man who had never been anywhere near a police station, his calm was exemplary.

"Let the law take its course. I am not in a position to comment on the matter. But I do know we don't want dad to ever see the inside of a jail, and we'd do everything in our power to make sure it doesn't happen.

"I don't know why these hard knocks are served up to me," he continues. "Maybe I deserve to be treated this way. But the stress is taking its toll on me."

He sighs, "And now, my success is being held against me. They say I've left my wife and children because the success of Hum Tum got to my head. Not true! My leaving Amrita (Singh) was not overnight. It was on the cards for a long time, and  another woman had nothing to do with it. When it (the separation) happened, it was like a very painful amputation. But it was also the best thing to do, given the circumstances. I'm at peace with Rosa (his current girl friend). I don't know what the future holds for us. But I feel whole and healthy."

Saif rules out remarriage. "I've gone through it once."

When told that people speculate that Saif would do it again, he fumes, "You mean leave Rosa for another woman? But how do I explain myself to people who think that way? Why do I owe an explanation to anyone except my family, my parents, my wife and two kids?" 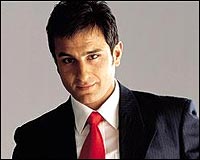 He continues on a different track, "My son is such a chamcha of mine. He even does his hair like me; tries to walk and talk like me! While Sarah (his daughter) understands the situation, Ibrahim (his son) thinks I'm just out for a long shooting schedule. Once, he asked me very loudly in front of a hundred people, when I was coming back. I felt like sinking into the ground. I miss my children so much! Anyone who thinks I've abandoned them doesn't know what it's to be like an absentee parent."

"I am Sarat Chandra's hero in a lot of ways," he says. "I wish I had done Sanjay Leela Bhansali's Devdas. But Sanjay had offered me the role of Devdas's friend Chunnilal (which eventually went to Jackie Shroff). I  wanted to be Devdas. I think I am Devdas."

"I don't have any answers for what has happened in my life. All I know is every penny I earn is for my children. I live for them. I'd die for them. I love my Dad and my kids. I want them to be happy and healthy.

"My wife and I have gone our separate ways. I respect my wife's space. Why am I being constantly reminded of how terrible a husband I was, and how awful a father I am. I've my son Ibrahim's photograph in my wallet. Each time I look at it, I feel like crying I'm not allowed to meet my children. They aren't allowed to come visit me, let alone stay with me. Why? Because there's a new woman in my life who'd influence my children against their mother? That's hogwash and Amrita knows it. Right now, my kids are growing up with Amrita's relatives and maidservants while she's out working in a television serial (Ekta Kapoor's Kkavyanjali). Why does she need to do that, when I'm willing to support my family?"

Saif reveals, "I've settled for extravagant post-breakup financial arrangements. I'm supposed to give Amrita Rs 5 crores, of which I've already given her approximately Rs 2.5 crore. Also, I'm paying Rs 1,00,000 per month until my son becomes 18.   I'm not Shah Rukh Khan. I don't have that kind of money. I've promised her I'll pay up the rest of the money, even if I've to  slog till I drop dead. Whatever I've earned from doing ads, stage shows and films is for my children. I've no money. Our bungalow is for Amrita and the kids. Rosa and I stay in a two-room apartment. Still, I've never been more at peace with myself."

He adds, "After a long time, I feel my self-worth has returned. It isn't nice to be constantly reminded of how worthless you are and to have taunts and insults thrown at your mother and sister. I've gone through all of it. Today if I've found someone who makes me feel I'm worth something, what's wrong with it? Earlier I had hit such a rock-bottom with my self-esteem that I'd be shocked if someone complimented me for my looks. Today, I've regained my confidence. If someone says something nice I say, 'That's fine. Stars are supposed to be complimented'."

Saif lets us in on his Italian girlfriend, Rosa. "Unlike Amrita, Rosa is not from the film industry. Sure, I liked being put in touch with the industry's bigwigs by Amrita, having dinner with Karan Johar etc. But in hindsight, I'd have been better off finding my way through the industry. There's a theory that whatever I am today is because Amrita took me by my finger and led me  through it all. It's probably true. She has played a big hand in my growth as an actor and human being. But it's a blessing to be with a woman who has nothing to do with movies. Even Shah Rukh's wife Gauri keeps out of his career. I'd like to keep it that way."