Guess who Ramu's new muse is 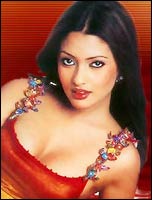 Item songs seem to be a gold card for Ram Gopal Varma's actresses. He got Sameera Reddy and Isha Koppikar to do one each in Darna Manaa Hai and Company, and their career got a new lease of life.

Now, it's the dimunitive Riya Sen who's caught the filmmaker's attention.

Moon Moon Sen's youngest daughter is about to get the Varma makeover treatment.

She will perform an item song in his production, James, which will launch Mohit Ahlawat as the 'new flavour at Varma's Factory.'

Ramu confirms, "I saw Riya in a music video with Jackie Shroff. She immediately caught my attention. There's something very appealing about her on screen. I was on the lookout for the right girl to do an item song for the credit titles in James. She fit the bill."

Will this be the beginning of new things for Riya in Factory, his production house? "I haven't offered her anything else," Ramu says. "The deal right now is just for a song. That's it."

Considering the impact of Ramu's other item girls -- Koena Mitra in Road and Rukhsar in D,  Riya can hope for a new start to her stagnant career.
Subhash K Jha
COMMENT
Print this article