'Working in Anniyan was a dream come true' 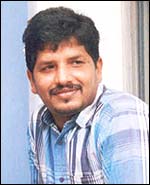 Ravi Varman is the only cinematographer from India to have won an international award. He received the best cinematography award at the 23rd International Film Festival in France for Jayaraj's Malayalam film, Santham.

It may surprise many to know that he had had absolutely no training in photography.

Varman was born in a village near Thanjavur and lost his parents at a very young age.

Loneliness and depression drove him to attempt suicide by lying on a railway track, hoping that a train would run him over. But his act got him arrested.

Having got his life back, he decided to do something worthwhile. He went to Chennai to bring meaning to his life. From zero to hero, that's Ravi Varman's life in a nutshell.

Now, he has worked with directors like Jayaraj, Rajeev Kumar, Priyadarshan, Honey Irani, Revathy, to name a few.

His most prestigious assignment now is Shankar's Anniyan, which he took up after politely refusing Bengali director Buddhadev Dasgupta.

He spoke to Contributing Special Correspondent Shobha Warrier, about how he got to complete Anniyan which was started by Manikandan.

It is a dream not only for me, but for all cinematographers, to work for Shankar Sir because he wants originality in the technical aspects of his films. He is a director who makes commercial films in an aesthetic way.

It was a dream come true for another reason as well. The first thing we did after I eloped with my girlfriend was watch Shankar's Gentleman in a Pondicherry theatre. From that day onwards, I wanted to work for Shankar.

The first time when I met Shankar was at the Kandukondein party. I was Ravi K Chandran's assistant in the film. I introduced myself to Shankar Sir.

Ravi K Chandran was the cinematographer of Shankar Sir's last film Boys. At that time, I had the opportunity to shoot Genelia's makeup test as Ravi Sir was in Mumbai for some other work.

I had just shot for a day and that was the time the makers of Run (starring Madhavan and Meera Jasmine) were looking for a cameraman. Shankar Sir recommended my name to them. I felt so happy.

After that, I worked with so many directors, and even won an international award but my desire to work for Shankar Sir remained.

The international award I won in France was for my work in Santham. It was Seema Biswas who was the bearer of the good news. When the call came, I was alone at home; my wife had gone to give her last engineering exam. I didn't know whom to tell and what to do. What I did then was, I went and stood under the shower and danced for an hour!

After the long shower, I called my guru Ravi K Chandran and informed him. Then I called Priyadarshan and he in turn passed on the news to Kamal Haasan.

At that time, I had just finished working as an assistant to Ravi K Chandran for Kamal Sir's Marudanayakam. The moment he came to know about the award, he called me to his office and congratulated me. He arranged a press meet and introduced me to the media.

Let me say one thing about Marudanayakam. When I say it is ten times better than Lagaan, you will know what kind of a film it is. If Kamal Sir were born outside India, he would have been a very well known international filmmaker.

Just before Shankar Sir started Anniyan, I had asked him when I could work with him. He didn't say anything but I was hopeful that he would call me. But when he started the film, it was with another cinematographer (Manikandan). I felt bad.

That was when I got an offer to shoot Buddhadeb Dasgupta's next film. He gave me the offer after watching Jayaraj's Santham and Revathy's Phir Milenge. We met in Kolkata and had almost fixed everything for his next venture. When I came back, I got a call from Shankar sir's office asking me whether I would be interested in shooting Anniyan. Manikandan had shot almost half the film.

I immediately accepted the offer. I went back to Kolkata to explain myself to Buddhadeb Dasgupta. He understood my dilemma and was kind enough to say that the two of us could work together some other time.

I felt extremely happy when Shankar Sir offered me Anniyan.

The first time I felt that happy was when I met Ravi K Chandran and joined him as an assistant.

The next time I felt so happy was when I eloped with the girl I loved and got married to her.

The third time I felt so happy was when my daughter was born.

The fourth incident was when Shankar sir offered me Anniyan.

I felt the same happiness when I won the international award for Santham too.

One of the scenes I really enjoyed shooting for Anniyan was at a stadium in Hyderabad. That entire sequence where light and shadow are juxtaposed is very important to the film. In the background, lights go on and off while Vikram speaks to the jam-packed stadium. If we lit up the entire stadium, it would have looked flat, so we decided not to. And it looked so different.

While shooting a scene, Shankar sir would insist we shoot from all possible angles so that he could have the best to choose from.

The song that we shot at an airport in Malaysia was also very interesting. Once again, I just followed the director's ideas. The song was shot like a commercial!

Somehow, I was lucky wherever I went to shoot. I still remember Jayaraj showing me the drawing of a scene in Santham which had raindrops falling, with crows flying in the background.

When I saw the drawing, I wondered if it were possible to get both in a single scene. But we did manage it.

Similarly, we went to the Malaysian airport with a clear idea of what we wanted. But I felt disappointed when I found that the area was full of steel structures. I was worried about light reflecting from steel. But luckily, all the days that we shot there, the sky was cloudy!

I like films like Sanatham because they depict real life. Besides, my life story was like that of Santham. So, I had tears in my eyes when we shot the film.

But we can only dream about a film like Anniyan. It's such a big canvas that you cannot even say how big it is. Surprisingly, some of the incidents Shankar Sir shows in his films which appear like fantasy later happens in real life. It's like life imitating art!

I feel no other director in India can visualise such a big canvas.