Bollywood turns on the laughing gas 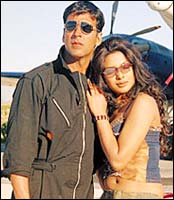 Laughter seems be the Bollywood flavour of the season, as a flock of Hindi comedies will be hitting theatres soon.

David Dhawan's Maine Pyar Kyun Kiya (don't miss the title's 'homage' to Sooraj Barjatya's Maine Pyar Kiya), featuring Salman Khan with real-life girlfriend Katrina Kaif and the sizzling Sushmita Sen, looks as funny as it can get. By the end of the year, Dhawan will also be ready with Shaadi No. 1, featuring a host of stars.

And while Govinda has relinquished the top comedian throne (with Ssukh reversing his image from grin to grim) Akshay Kumar has clearly discovered a penchant for parody that he's currently exploiting in as many as three under-production films -- Priyadarshan's Garam Masala, Vikram Bhatt's Deewane Huey Pagal and Neeraj Vohra's Phir Hera Pheri.

"Why not?" Akshay says, without sounding defensive. "What's wrong in making people laugh? I think it's a rare ability and one that I'm most certainly not letting go. I enjoyed doing comedy with Mr & Mrs Khiladi, Mujhse Shaadi Karogi, and even Khakee, where I was almost the comic relief. These films got me maximum notice and even awards. Like Dharamji (Dharmendra), whose best films like Praitigya, Chupke Chupke, and even Sholay had him in funny parts, I don't mind doing comedy."

Neither does Priyanka Chopra, who discovered her appetite for the funnies in Akshay's company in Mujhse Shaadi Karogi and is now flirting with the funny-bone in writer-turned-director Rumi Jaffri's yet untiled film.

"It's a nonstop laugh riot. And I love doing comedy, especially with Salman Khan who's my co-star in Rumi's film. I had some really funny moments in Andaaz and Shaadi Karogi. I feel making people laugh is really tough, specially (for) women, since they aren't natural-born comedians. That's why I admire Rani Mukerji. She's exceptionally funny in Bunty Aur Babli."

Rani won't have much of a chance to be funny in her forthcoming films. But her Veer-Zaara co-star, Preity Zinta, is in mirthful mode in debutant director Siddharth Anand's Salaam Namaste. 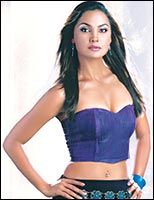 Another writer-turned-director Anees Bazmi gets giggly with Boney Kapoor's farce-fest No Entry, which has three big heroes -- Anil Kapoor, Salman Khan and Fardeen Khan -- making funny faces. Lara Dutta, who stars in the film, says, "I play a loud, possessive, Punjabi woman, like Tabu in Biwi No. 1. It was so out of character for me. I had a ball."

If Bazmi's No Entry works, perhaps he can finally release his long-delayed Govinda comedy Hum Do Hamare Ek.

For now, the ball is entirely in the comic court. Anant Mahadevan, about to launch his comedy Do Dooni Chaar, feels it's far more difficult to make people laugh than cry.

"We desperately need laughter in our lives," he says.