Manisha, we want Rajjo back! 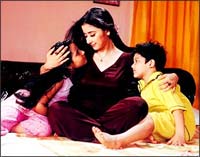 As I write, my head reels. I am yet to recover from the pain I went through while reviewing Anjaane: The Unknown. Sadly, Bollywood is infested with directors who pick popular Hollywood films and make sad remakes of them. Anjaane, which features you ans is a remake of The Others, is no exception.

In a recent chat with me, you told me you want to concentrate on good films. If Anjaane is your idea of a quality production, maybe it's time you started thinking.

Anjaane makes you lose faith in the process of filmmaking.

I used to be a great fan of yours. I saw 1942: A Love Story a couple of times. Your non-regular appearances in films upset me. But what has happened to your choice of films? First, there was the disastrous Mumbai Xpress. Then there was Akbar Khan's poor man's epic Taj Mahal.

Anjaane did not mention any time frame. Assuming it depicts India 2005, the jewellery you wore look as if they were lifted straight out of the history books. 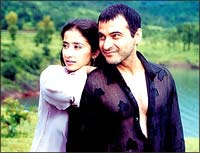 Your performance too was far from satisfactory. Your eyes could not emote. I was desperately seeking the naïve innocence of Rajjo (1942) in your character Shivani and found there instead, a soul-less mannequin.

Didn't the directors -- Nilesh Ubhe, Shailesh Rane and Krishna Jani -- tell you that your voice was too shrill? For that matter, Helen's voice was shrill as well.

Why are you acting in B grade films like Market, Chahat and Anjaane these days? I still believe in your unquestionable acting prowess. And I hope you will regain the lost berth in your admirers' hearts.