Ash on The Oprah Winfrey show! 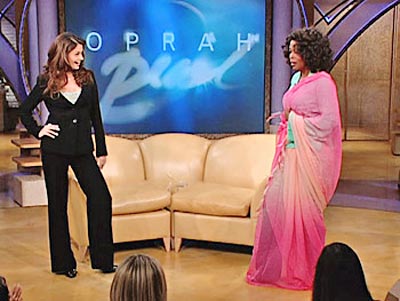 Aishwarya Rai sure knows how to keep herself in the public eye. After featuring in Cannes, Madame Tussauds and David Letterman's Late Show, her next stop was The Oprah Winfrey show!

The actress is the first Indian actor to feature in this widely-watched television show.

She certainly seemed to have won over her hostess, as Oprah wore the sari that Ash had brought along. Oprah commented that the sari was very 'sensual.'

Excerpts from the show:

Oprah: I think you're gorgeous. When you look at yourself, do you see that?

Ash: To me, beautiful is as beautiful does. I think that's what speaks volumes.

Ash answered the often-asked question of her still staying with her parents, with: "Back home, you're a loser if you say, 'Mom, I'm out of here.' In India it's more about the family, about living together, about remaining connected, and that's probably the most beautiful special thing about it."

Oprah: We did a show recently where we were looking at women around the world, and we were talking to French women at a cafe.  They said (Americans) are all fat.

Oprah: Do they say we're rude?

Oprah: Do they say we talk too much?

Oprah: Do they say we get a lot of divorces?

Ash: Ah, that could be a discussion.

Oprah: You know what, you could be a diplomat!