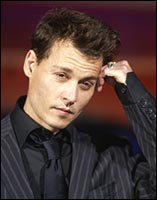 Johnny Depp, rated by People magazine as one of the sexiest men alive, will forsake wet pirate gear and rum for a novel adaptation that could see him dodging kangaroos and eating parathas.

Shantaram: A Novel, by Gregory David Roberts, has been optioned by Warner Bros Pictures, Initial Entertainment Group, Plan B and Johnny Depp's own Infinitum Nihil, who have acquired film rights in a deal reportedly worth $1 to $2 million, says Hollywood Reporter.

The novel, to be published on October 13, is Gregory David Roberts' literary debut. It is an epic tale set in the underbelly of contemporary Mumbai.

Depp will essay the role of the narrator Linn, an escaped convict with a false passport fleeing an Australian prison for the teeming streets of a city which offers him anonymity and escape.

The film traverses through Mumbai at its grimiest and shiniest, oscillating between Linn's apprenticeship in the dark arts of the Mumbai mafia, his passionate, wild love affair, and Bollywood, as he searches for love and meaning without a home or an identity.

Shantaram has invited positive reviews and is reported to be an affectionately written book with touches of autobiography.

Depp, currently on a literary bend, is also working on a remake of Charlie And The Chocolate Factory (based on Roald Dahl's famous book) with director Tim Burton. He will soon return to his much-acclaimed role of Jack Sparrow in Pirates Of The Caribbean 2.