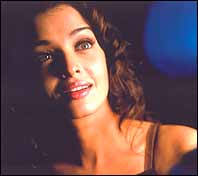 Instead of 'All characters in this film are imaginary' etc etc, director Samir Karnik should have said this: All those who want to know how to have fun while making a film, watch this film. Any resemblance to anyone not having fun is totally untrue and imaginary.

More on fun and other catchphrases in Kyun! Ho Gaya Na...

Keywords: Loves sports, all kinds of sports, including some you might not have heard of. The more known ones are, car rallys, bowling, soccer. Sometimes moonlights as the train vendor T S Ranganathan or Ranga. He's a nice guy. Easy to con. He cons others just as easily, especially newfound buddy Diya Malhotra, with his practical jokes. Oh ya, he believes in arranged marriage with a passion. Not quite sure why, but it has something to do with the glorious tradition of arranged marriages in his family.

Keywords: Has a friend for a dad and a mysterious Uncle whom she vows she doesn't want to speak to. She will soon take an exam for a degree in Social Work, for which she travels to Mumbai from her hometown, Coorg. Believes in love marriage with a passion, and is so super keen to meet her Mr Right that she gets starry-eyed at a train vendor's ideas on wooing a girl.

'Souriers' and the art of witty repartee.

All roads lead to Arjun, of course (Vivek Oberoi shares the dialogues credits as well). Strangely, the bulk of the witty moments are in his relationship and interaction with others, not so much Diya. Take the scene where his man Friday tells him he has a 'sourier' (courier) for him.

Another is the one where director Samir Karnik's takes a dig at his own movie, where he appears in a cameo as a short-tempered director stuck at a romantic scene. Arjun sets up the situation for him in a takeoff on the famous comedian Mehmood. No one compares to Mehmood, of course. 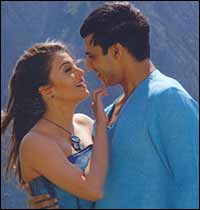 And the other bylanes in Arjun's father (Om Puri), who makes a domestic career of picking on his wife (Rati Agnihotri). Friendship and affection are offset only by their own quirky game of one-upmanship on each other and their son.

C'mon Charlie and Operation Uncle Mission of the unholy devils.

And then there is the man with a penchant for a quaint phrase: "C'mon Charlie." He is a cross between Shammi Kapoor's Brahmachari and Anil Kapoor's Mr India, runs an orphanage with a motley crowd of little hellions and delights in being the master hellion.

He is also Diya's favourite Uncle (Amitabh Bachchan, in a wacky, over-the-top avatar).

Some reasons why you need a reality check on KHGN:

A weirdly dragging first half (not even the opening car race and the energetically and imaginatively picturised songs can help). The film picks up after the interval but then again loses pace halfway through the second half. It could have safely done away with 30 minutes.

Arjun's declarations on arranged marriage seem just an escapist's way out than any real belief in the tradition. He might be a confused soul, but all avowals die soon when jealousy rears its head in Arjun.

In the amazingly picture perfect world of Kyun! Ho Gaya Na, there is no room for human failing, no blemish, nothing other than Arjun's own self-absorption. The film is a celluloid advertisement for house beautiful and some assorted product placements.

The film's single-minded devotion to fun and light-heartedness probably alludes to a larger emerging picture, with earlier films like Dil Chahta Hai, Kal Ho Naa Ho, Hum Tum and, to a certain extent, Lakshya, bringing in an urban cool sensibility to cinema. This is a comedy of manners world of suave sophistication, of people comfortable enough to do nothing more than enjoy the good life. 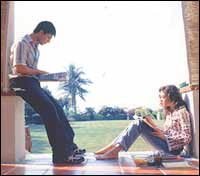 Little details form a large part of his film  the parallel between 'Arjun' and the orphan child 'Parth'; the director's insertion of his name in the film as a third person; Karnik's own cameo in the film; the reel-life-real-life friendship between Tinnu Anand (who plays Diya's father) and Amitabh Bachchan; the 'twist' in the name Diya (without going into spoilers, here's a hint: you will have to wait till the end to find out the connection).

Kyun! Ho Gaya Na is an assured first-time effort (Samir Karnik is pulling a fast one if he says he doesn't know how to take a shot!). Wish he had induced some real pace into the film instead of the simulated energy he achieved in his songs.

Speaking of which, the music needs special mention. Ranging from country Western and traces of Western classical to rap and rock, Shankar-Ehsaan-Loy's tunes are young, energetic and peppy. They are also visualised well by cinematographer Sudeep Chatterjee and Samir Karnik.

It wouldn't be a surprise if this situational comedy fares very well in the metros.