Krauss and the costliest accessory at Oscars 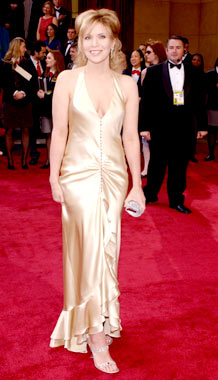 THE DISPLAY: Singer Alison Krauss, who was nominated for best song for the movie Cold Mountain wore the world's most expensive pair of shoes at the 76th Annual Academy Awards (Oscars) ceremony on February 29 at the Kodak Theater in Hollywood, California.

Stuart Weitzman will make a replica pair, with crystals instead of diamonds, for Krauss to keep after the Oscars. The designer traditionally gives away 200 pairs of shoes to actors during Oscar week.

Singer Alison Krauss at the Oscars wearing the world's most expensive pair of shoes.