How I bought my car 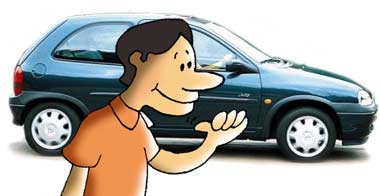 And there were just three ways in which I could get one.

Option I: Charm my father

Maybe he'd sponsor one. Which, to tell you the truth, sounds a lot easier than it really is. So I promptly dumped the idea.

Option II: Use my savings

This one barely creeped into my mind before it was thrown right out.

This was one route I was not going to drive down. There's no way I would utilise my savings to upgrade my lifestyle.

After all, what are banks for?

I rather liked the idea of someone else paying for my new transport. This way, I could buy the car I wanted and repay the loan over a period of time.

I know I end up paying more than what I would have if I had put down all the money at one go. But I did not want clear my bank account just to get a set of wheels.

It was not too difficult. I had decided I wanted a car. I knew which one I wanted (an Opel Corsa Swing -- don't ask me why!). And how I was going to get it. Not bad at all!

Now, all I needed was a good deal.

The good news was that, even before I even stepped into a car dealer's office, I began to get calls from Direct Sales Agents. DSAs call and entice you with deals so that you are tempted into buying a car.

Each one, of course, said their deal was the sweetest. I chatted with all of them to see what they were offering.

Now, in case you are wondering why I was so fortunate, let me explain.

I had purchased a Santro earlier and was obviously recorded in the databases of everyone I had interacted with then. They keep calling to find out if I was interested in another vehicle.

And, since I never did default on my payments, I even got calls from banks asking if I wanted to transfer my earlier loan to a new one at a cheaper rate of interest.

So, even before I began to visit various car dealers, I already had a fair idea on what the market was offering.

With this ammunition in hand, I visited my first dealer.

Don't shake hands with the dealer too soon

The sales lady at the car dealership knew her stuff. She even tried to convince me into buying another car. But I stood my ground.

I was not only certain of what I wanted, I was also pretty sure of the colour.

It was not in stock so she tried convincing me again. This time she suggested a change of colour. Once again, I am proud to say, I stuck my ground.

She managed to get it for me within a week.

She then gave me her consumer list (the list of cars a dealer stocks and the relevant discounts) and told me the discount she would offer. The latter is given depending on whether or not the dealer is having a good day. Don't ever assume it's the final price.

She promised me that if I took the finance scheme she was offering, she would be in a "better position to offer her produce". Yup, I was shocked at her selection of words too, but I guess every industry speaks its own mumbo-jumbo.

Being rather cynical, I read that as a clear sign that she did not merely want to sell a car, she was all set to slaughter me in the bargain.

I told her I could not take her deal; that a DSA was offering me free insurance for a year, free RTO registration and between 13-14 percent interest on a five-year loan (don't gasp, interest rates were higher then in 2002).

You have to insure and register your car; there's no escaping that. The cost for insurance and RTO registration differs from car to car. In my case, insurance would cost me Rs 22,807 and registration, Rs 30,921.

Within a few minutes, she returned with an identical offer and a few more freebies thrown in.

I was still not convinced.

It's really no great shakes when the car dealer makes you the same offer as the DSA. The dealers give the DSAs commissions in the three to five percent range to get more business. Since I was approaching a dealer directly, he would not have to give a commission to the DSA. Why couldn't that amount be part of my discount?

I decide to wrangle myself a better deal.

You may say I'm greedy, but it worked. Some more goodies were thrown my way.

The insurance was hiked to two years. The free RTO registration stayed. Here's what else I got for free:

Oops, I almost forgot! A fancy registration number (I remember dishing out Rs 2,000 for my Santro number).

You know the saying, give a camel an inch and he takes a yard.

I was definitely inspired by that camel. I wanted more.

"How about free seat covers?", I asked her (don't shake your head, you would have said the same).

This time, she stood her ground. I did not get the covers.

What about a cash discount?

I was given a choice of a cash discount in the Rs 10,000-Rs 12,000 range. But I figured this would cost me the freebies (which I really wanted). So, instead of taking the discount, I decided to take the freebies.

The rate of interest amounted to 13.43 percent (like I mentioned earlier, this was in June 2002 before the interest rates decided to head south).

The moment I informed the DSA what I was getting, he was all set to match the offer. But I decided to stay where I was.

The knowledge I acquired with my car

If you are reading this, I would assume you are planning a set of wheels for yourself.

Great! There's no time like now. There's a great choice out there in the market. And interest rates are low.

If you are stuck with an old car loan (like I am), there's no better time to switch loans too. New car loans are now going for around 8.5  9.5 percent per annum.

The ABC of car finance

How to get the best deal for your car

What your car dealer won't tell you

Did you get a good deal when you bought your car? Would you like to share your experience with us? Let us know.