The killing fields of Bihar 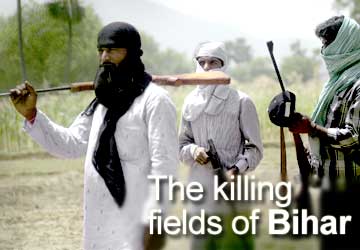 For the residents of village Laxmanpur-Bathe in the newly carved out Arwal district of Bihar, elections are a meaningless exercise.

The village on the banks of Sone river shot into limelight on December 1, 1997 when scores of men belonging to the Ranvir Sena -- a private army of upper caste landlords in Bihar -- massacred 58 dalits here.

The massacre was in retaliation to the killings of five upper caste men by the Communist Party of India (Marxist-Leninist) activists nearby. There was also a land dispute -- one consistent theme in all the killings that take place in the Naxalite-infested Patna-Jehanabad-Arwal-Gaya belt.

Soon after the incident came the mandatory teams of politicians, promising everything short of the stars. Nothing changed.

On December 6, the Justice Amir Das Commission was constituted to probe the nexus between the Ranvir Sena and political elements. It had six months to do its job, but hearings are still on.

Even charges have not been filed. Twenty-two of the 24 accused are out on bail.

"Last time when the panchayat election took place our polling booth was in a Yadav village," Bineshar Raj Bansi, who lost six members of his family in the attack  his mother, wife, daughter, brother's wife and their two children  told rediff.com. "We went there, but were not allowed to vote. They had guns. What could we do? We told them, 'You can vote on our behalf,' and came back."

Bineshwar is lucky to be alive. "I was working in Gaziabad (Uttar Pradesh) when I heard the news. Had I been in the village I too would have been killed," he said.

His brother was in the house, but he managed to escape.

"People say they were around 300. Who knows? But they were shouting, 'Ranvir Sena ki jai!'"

The village has people of all castes and, according to Bansi, the upper class families gave them away. They guided the killers.

But the upper class people deny doing anything like that. "That is all a lie," one of them told rediff.com

Notwithstanding Rabri Devi's promise, the roads are still the same; it takes more than 45 minutes to travel the five-odd kilometers from the main road to the village.

There is no electricity in the village. There is one school for the 700-odd kids.

'The teacher does not come here. He takes his salary here, but works somewhere else," Panchanand Paswan, a resident of the village, told rediff.com

After the incident, the government established a Bihar Military Police picket in the village. One of the jawans there, who is completely drunk, insists that his photo be taken.

His senior admonishes him, but he is in no mood to listen.

The senior pleads us not to take a picture and helps his drunk jawan to his feet.

Soon another jawan comes totting a machine gun and he too insists that his photo be clicked.

There are many Laxmanpur-Bathes on the route to Gaya. The villages change, the casts change, but the story remains the same. In this fight between Naxalites and upper class landowners, it is the poor who mostly get killed.