'Lalu's arrogance will cause his downfall' 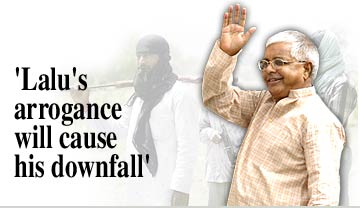 He is Lalu Prasad Yadav's oldest political rival. His battle against the Rashtriya Janata Dal chief has been nothing less than heroic.

But Sushil Kumar Modi, Bharatiya Janata Party vice-president and the Lok Sabha member from Bhagalpur, is too straightforward a politician to match up to Lalu's cunning.

It was Modi, when he was leader of the Opposition in the Bihar assembly, along with a few others, who filed the writ petition that resulted in the expose of the fodder scam, in which Lalu is an accused.

But Modi has been unable to emerge victorious in the bigger political battle of winning over the masses at the grassroot level because of the institutionalisation of caste-based politics by Lalu and Muslim leaders.

As Bihar goes to the polls, Modi, 63, carries a dream -- to dislodge the RJD from power and end Lalu raj in Bihar.

In an interview to Senior Editor Sheela Bhatt, Modi discusses the political scene in the state and his party's chances in the election.

Even eight years after the fodder scam was exposed you have not been able to nail Lalu Prasad Yadav.

I can't help it. The judicial process is on in a lower court. In India, it is a time-consuming affair.

Judgments have been delivered in some four, five cases convicting the accused. But Lalu Yadav is obstructing the process at every turn.

The Central Bureau of Investigation has strong evidence against Lalu Yadav, but he is influencing witnesses or threatening them and manipulating evidence.

At every step he is slowing down the process of justice. Now that he is in power at the Centre, he is trying to influence the CBI. He is asking the tax authorities to raid the premises of witnesses.

There are indications that the RJD may win again.

No, that is not the ground reality. In Bihar, there is strong opposition to Lalu Yadav and his kind of politics.

Why was Ram Vilas Paswan reluctant to join the NDA?

Because he feels Bihar will have a hung assembly after the election.

Also, he does not want to lose power at the Centre. If he joins the NDA, Lalu Yadav will force the Congress to seek his resignation from the Union cabinet. Prime Minister Manmohan Singh too would not have tolerated his Cabinet minister being associated with the Opposition.

You people, the media, have overestimated Paswan's strength.

In the last assembly election, Sharad Yadav and Paswan were part of the Janata Dal-United. Paswan's group could win only six seats of the 24 allotted.

That Is only because of his caste! He is a Yadav. His hatred for the BJP is well known. Hence, he has with him the Muslim votes. The Yadavs and Muslims account for 30 per cent of the electorate in Bihar.

But you must remember that in the 2000 assembly election, Lalu Yadav had less Muslim and Yadav votes than previous elections. This base of his has further weakened considerably.

In the 2000 assembly election, of the 324 seats in Bihar (Jharkhand was still part of Bihar), Lalu got only 115 seats compared to the 160 in the previous election. Last time itself, he had lost considerably.

And if Nitish Kumar and Paswan (uniting the Kurmi and Dalit communities) had joined hands, there was no way the Muslim-Yadav combination could have ensured Lalu's win.

Unfortunately, there was disagreement within the NDA, whose constituents fought against each other in 67 seats.

The Congress fought the election on its own. It and the Jharkhand Mukti Morcha wanted to fill up the Opposition's space.

In 2000 people had voted against Lalu, but those votes got divided and he survived for one more term by getting the support of the JMM and the Congress, which had fought the election on the anti-Lalu plank.

So why are we not hearing stories of revolt against the lack of development and absence of governance in Bihar?

In Bihar, social justice is more important than economic justice. The caste factor is the only important factor. The answer to who is ruling has a psychological advantage for the poor in the state. That community feeling is prevalent in us. Hamara aadmi CM ho -- People like to ensure that.

Why has no other Yadav leader been as successful as Lalu?

Sharad Yadav did make some dent in the 1999 Lok Sabha election. But again, people thought apna admi must remain CM. They understood that if Yadav votes get divided, the next CM might not be a Yadav, and that would end Lalu Yadav raj in Bihar.

What about you? Why are you and your party still a non-starter in Bihar?

We talk about sadak, bijli and pani till the election. However, a couple of days before voting, things change. Castes of candidates become the only important factor in the last leg of the election.

When a Yadav MLA or MP gets too corrupt, people revolt. But, another Yadav rises and he becomes a rebel candidate. We (the non-Yadavs) don't make gains!

How's the mood in the state this time?

People are angry. The BJP is in a better shape than before.

Who says miracles don't happen in India? What happened in Rajasthan? (Ashok)Gehlot was not a bad leader, yet he lost.

The assembly election will be fought on local issues. And in Bihar, there is a huge anti-incumbency wave. It is not making national news, but we know how people are coming out on to the streets at the slightest discomfort.

Lathi-charges are taking place on a daily basis. Some die, many get hurt. For you, it's a normal feature of Bihar, but for us it is not.

Will you be able to end Lalu's raj?

I am fully confident about it. He is overconfident of winning the election. But I am sure we will win. Lalu's arrogance will cause his downfall.