Sign in  |  Create a Rediffmail account
Rediff.com  » News » 'It is disintegrated UPA vs united NDA in Bihar'

'It is disintegrated UPA vs united NDA in Bihar' 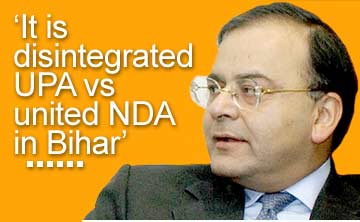 Bihar goes to the polls next month. The question everyone seems to be asking is: Will the 15-year rule of Lalu Prasad Yadav and his family come to an end?

The Rashtriya Janata Dal chief is campaigning in earnest. In the wake of the interim report by the U C Bannerjee Committee, he is even raking up the Godhra issue, mocking an Election Commission directive against politicising it.

Obviously, this is aimed at appeasing the Muslim community and to blunt the chances of the National Democratic Alliance in the assembly election.

Arun Jaitley, the Bharatiya Janata Party general secretary who is in charge of party affairs in Bihar, feels the BJP-Janata Dal (United) combine has a fair chance of toppling the RJD government.

The other major contenders in the poll -- United Progressive Alliance allies Congress and the Lok Janashakti Party -- are banking on the votes of the economically backward classes, Muslims, Dalits, Thakurs and the Bhumihars.

Their candidates can divide the votes of the frontrunners, especially of the RJD, also a constituent of the UPA, and change the equations in the politically volatile state.

Jaitley feels this factor, coupled with some others, will enhance the NDA's prospects.

He said he did not want to talk about Bihar to any television channel. "In Bihar, poor people don't watch much television because power supply is either absent or erratic", he said, or rediff.com, because he wanted to devote one month "exclusively for Bihar dailies like Prabhat Khabar and Dainik Jagran."

However, Senior Editor Sheela Bhatt persuaded him to share his views with rediff.com

Gujarat still haunts you, right? Before the BJP could finalise its pre-poll alliance for Bihar, JD-U leaders like Prabhunath Singh and Rajeev Ranjan wanted to leave the NDA because of the fear of losing Muslim votes. It is reported that the BJP prevailed upon JD-U leaders Nitish Kumar and George Fernandes.

I think the problem with some journalists is that they create a theory and become its victim. For the past few months, I have been interacting with the JD-U at all levels. I have not seen any resistance. This is the sixth election we are contesting together.

But the JD-U stands to lose Muslim votes by being in the alliance.

After the Gujarat riots we fought the Lok Sabha election together. The BJP occupies a big space in the anti-RJD politics of Bihar. The JD-U realises that no anti-RJD politics is possible without that crucial factor.

Some friends in the JD-U, understandably so, were interested in making this alliance broader by inviting other anti-RJD parties into it. But that didn't work out.

I think Ram Vilas Paswan's own reluctance, or I would say his own anxiety to continue to be a part of the Union Cabinet, was a principal factor in the failure of the talks.

Paswan's politics is characterised by dichotomy. Though he is collectively responsible with Lalu Prasad Yadav for running this country, he wants to oppose him in Bihar.

The BJP's Bihar poll strategy is called Operation Vijay. The media in Delhi had a hearty laugh.

The media and even we have been hopelessly proven wrong many times. So let us not laugh at each other. He who laughs last laughs the loudest.

I think the RJD is going to be in serious trouble in this election.

First, there is a groundswell of desire among people for change.

Two, people identify problems of Bihar with the present government.

Four, the Lok Sabha results were the results of a broad-based alliance of the RJD, Congress and Paswan. That alliance is now in a shambles, at least with regard to the assembly polls. Today, Lalu is alone without the other two.

When we started campaigning we tried to consolidate the anti-RJD votes. But later we realised that holding on to the NDA's traditional votes would serve our purpose well.

But the NDA's traditional base does not account for even 25 per cent of votes.

I think you are looking at the Census and not political figures. In the last Lok Sabha election, even though we didn't perform well, we still polled 37 per cent of votes.

It is argued that the Apna Dal has been brought in from Uttar Pradesh to cut into Nitish Kumar's votes. Also the Bahujan Samaj Party will cut into Paswan's votes. Either way, Lalu will be the beneficiary.

I think these are desperate arguments. Both (the Apna Dal and the BSP) have marginal, almost insignificant, presence in Bihar.

If not Lalu, whom should Biharis vote for? You have not projected any leader.

The BJP-JD-U alliance is the only stable, surviving alliance. We are the nucleus of anti-RJD politics. I think you should not underestimate Bihar voters and assume that they don't understand what is happening in the state.

When UPA came to power at the Centre they didn't project any leader. We will elect our leader after the results.

Will it be Nitish Kumar?

Since you are so sure I don't want to name anyone.

We have seen that during election time people in Bihar forgive Lalu for everything and vote him back to power. Why do you think they will not do the same again?

I don't think you can fool all the people all the time.

Do you predict a hung assembly?

You should not predict figures. My view is that onsidering the manner in which the contest has been shaping up and the way UPA partners have disintegrated, if the NDA sustains its vote share, Bihar is in for a surprise.

How do you see the friendly contest between Lalu and the Congress?

I have already said this friendly contest will turn into unfriendly nightmares. It happened to us in 2000, it will happen to the UPA partners in 2005. It is disintegrated UPA versus united NDA in Bihar.

What are your election issues?

The key issue will be the situation in Bihar for which the RJD and Lalu are responsible. Even the UPA will find difficult to defend this. Traveling 100 km takes 6 hours in Bihar.

Is Lalu your only target?

The Congress is a marginalised force in Bihar. It is in disarray. It does not even know how many seats it is contesting and who its electoral partners are.

Different people are wooing it for different reasons. The Congress appears to be two-timing both Lalu and Paswan. It's contesting a race on three legs. Three-legged runners can't win against a sprinter.

How is Paswan doing?

Paswan claims to be anti-RJD but he is reluctant to join the anti-RJD front. You can never become a political force if you lack clarity and courage.

What is your biggest challenge?

We have overcome our first challenge. The NDA is united and our alliance is continuing smoothly. The second challenge is to take the campaign to a high pitch and convince Bihar voters that we are in a position to defeat Lalu.

Then we have to consolidate anti-RJD votes. The people of Bihar know of their misery. Now the cause of the misery should be identified. Besides Yadavs and Muslims, other categories of voters too vote in Bihar!

What kind of impact will the results have at the Centre?

I think the Bihar election will cause widening of rifts within the UPA. Imagine what will happen if Lalu loses and he identifies the Congress as the cause for his defeat.