A land where guns rule the roost 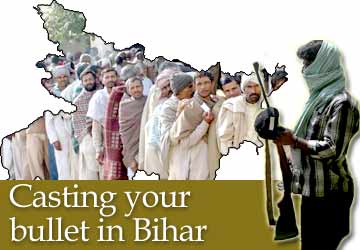 On Feb 3, election day, Gaya is a ghost town. Except for a few chai shops and a couple of chemist shops, all business establishments are closed.

Police ask anyone carrying a bag to declare what is inside. How the day will progress is evident pretty much in the morning itself.

As I chat with a Doordarshan crew right outside my hotel a cavalcade appears from nowhere and screeches right in front us. Commandos in black, jump out and surround us. A hotel boy standing behind us is shoved around and asked to get back into the hotel.

One of the windows of the lead car opens and the District Magistrate Chaitanya Kumar Prasad looks out. He wants to know how a vehicle, which is hired by the DD crew, is standing outside. The DD reporter introduces himself and says he is here to cover the elections.

"Do you have an election commission pass," the magistrate asks. He doesn't; his cameraman does.

Journalist or no journalist, no one can move around in a vehicle without an EC pass, we are told.

I tell him that I want to go to the election control room and a couple of booths to see how the voting is progressing. "You will have to walk," Prasad says, adding, "You cannot take a vehicle unless you have a pass."

At the control room near the DM's office, news comes in that seven policemen have been killed in a blast in Jharkhand. There are also reports of firing in some areas of Jahanabad and Gaya district.

Soon the Rashtriya Janata Dal member of Legislative Assembly from Gaya Muffassil Vinod Kumar Yadavendu comes in a small cavalcade and announces to the journalists that polling in 25 booths in his constituency is over already, at 10 am. That poor and backward class people are being intimidated in many booths. "Aap media walle aayiye humare saath," he says (You media guys please come with us)

He adds that supporters of Avdesh Singh, who is contesting as an Independent, are the culprits.

Sitting next to him in the front seat of his Tata Sumo with television journalists following in another car, we head for the affected polling booths.

In booth 149, a couple of kilometres outside town, all is quiet. There are no voters and no activity happening. When the MLA arrives, the locals run towards him and read out a list of charges.

"Avdesh Singh supporters came and beat us up. No one has been able to cast a vote here," one person says, adding that firing is going in other booths. There are over 900 voters here and no one had been allowed to vote.

'Hum tight hain' is what one policeman says. He means they are all alert and discharging their duties well.

The EC had said that no voting would take place if CRPF and other central personnel are not in the booth.

But here they are nowhere to be found. There are only some policemen and they are mostly helpless. Before leaving, Yadavendu tells his supporters 'Machine thod do' (destroy the machine).

"Aur kya upay hain (What other option is there?)," he says turning towards me.

In another booth a few kilometres away, the situation is worse.

He adds that he is the election observer here.

One of his men retorts 'Machine thod denge to goli chal jaegi' (if you do that bullets will fly). Yadevendu says 'Chalne do. Hum jawab dengey' (go ahead, we will retaliate).

On the way to another booth, a few opposition supporters fire towards our car. The MLA tells the driver to hurry up. "If we stop here these people will not hesitate to kill us," he says.

All along the way, he is besieged with calls -- a couple from the CM's house; Lalu Yadav wants an update, many from his workers who want to update him about the situation in the booths.

Time and again the MLA tells his people to break the Electronic Voting Machines. Once he says 'Dalo dalo,' asking the person at the end of the line to make sure that as many votes as possible are punched.

Back in front of the DM's office, a TV journalist who is covering the entire Bihar elections standing there asks Yadevendu a copout question 'who is behind all this?'

Yadevendu says, "It is the goons from the Opposition who are behind all this. They don't want an honest and progressive government in Bihar."

The killing fields of Bihar