What is the Election Commission? 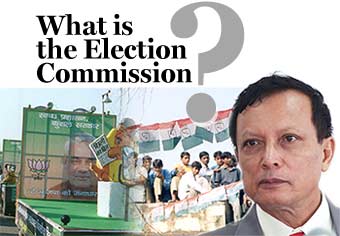 The Lok Sabha may be dissolved on Friday.

Last week, we provided readers with some insights into what the dissolution of the Lok Sabha meant.

In our continuing series explaining India's electoral process, we take a look today at India's Election Commission, the organisation which conducts the general election.

With an electorate exceeding 668 million people voting in 800,000 polling stations spread across widely varying geographic and climatic zones, the general election is a mammoth exercise.

It is the Election Commission that supervises the world's largest political event.

What is the Election Commission?

It is India's supreme Constitutional authority for conducting elections to Parliament and the state legislatures and also, the offices of the President and Vice-President.

Originally, India only had one Chief Election Commissioner.

Lyngdoh retires on Saturday, February 7, and the government has appointed Krishnamurthy as the new Chief Election Commissioner.

How does the Commission function?

The Commission has a secretariat at New Delhi, consisting of about 300 officials, in a hierarchical set-up.

There is functional and territorial distribution of work in the Commission. The work is organized in divisions, branches and sections; each of the last mentioned units is in charge of a Section Officer.

The territorial work is distributed among separate units responsible for different zones into which the 29 constituent states and six Union territories are grouped for convenience of management.

At the state level, the election work is supervised by a Chief Electoral Officer, who is appointed by the Commission from
amongst senior civil servants. He is a full time officer and is assisted by a supporting staff.

How does the Commission conduct the elections?

The Commission usually announces the election schedule a few weeks before the formal process is set in motion. The
Model Code of Conduct for political parties comes into effect after this announcement.

The formal election process starts with a notification calling upon the electorate to elect members of Parliament or state legislatures.

Candidates can withdraw from the contest within two days from the date of scrutiny.

Candidates in the fray get at least two weeks for campaigning before the actual date of the election.

On account of the magnitude of operations and the size of the electorate, polling is held at least on three days for the general election.

A separate date for counting is fixed and the results declared for each constituency by the concerned Returning Officer.

What is the size of the government staff and security forces that help the Election Commission conduct the election?

This huge election machinery is on deputation to the Election Commission and is subject to its control, supervision and discipline during the election period, extending over a period of between one-a-and-a-half to two months.

How many days does it take to complete a general election?

The entire process takes between five to eight weeks.

What does the Election Commission do after the results of the general election are declared?

The Election Commission compiles the list of elected members and issues an appropriate notification for due
constitution of the Lok Sabha.

With this, the electoral process is complete. The President of India can convene the House.

What budget does the Commission have to conduct the election?

The Commission has an independent budget, which is finalized directly in consultation with the finance ministry. The
ministry usually accepts the Commission's recommendation for its budget.

If an election is held only to the Lok Sabha, the expenditure is borne entirely by the central government.

For elections held only to the state legislature, the expenditure is borne entirely by the concerned state.

How many Lok Sabha constituencies are there?

India has been divided into 543 parliamentary constituencies, each of which returns one member to the Lok Sabha, the lower house of Parliament.

The size and shape of the parliamentary constituencies have been determined, subject to geographical considerations and the boundaries of the states and administrative areas.

Any citizen over the age of 18 can vote. Those who are deemed unsound of mind, and people convicted of certain criminal offences are not allowed to vote.

What is an election photo identity card?

The Election Commission has made photo identity cards for all voters compulsory to prevent electoral fraud.

More than 400 million identity cards have been distributed till now. Those who have not been issued photo cards can also vote, provided their name is accurately listed in the electoral roll.

The Commission has computerized the entire electoral rolls.

Who can contest the Lok Sabha election?

Any Indian citizen who is registered as a voter and is over 25 years of age can contest elections to the Lok Sabha.

Every candidate has to make a deposit of Rs 10,000 for the Lok Sabha election. The deposit is returned if the candidate
receives more than one-sixth of the total number of valid votes polled in the constituency.

Political parties are registered with the Election Commission under the Representation of People Act.

Political parties registered with it are granted recognition at the state and national levels.

The Commission has quasi-judicial jurisdiction to settle disputes between the splinter groups of registered parties.

How many people contested the last Lok Sabha election, in 1999?