What does dissolution of Parliament mean? 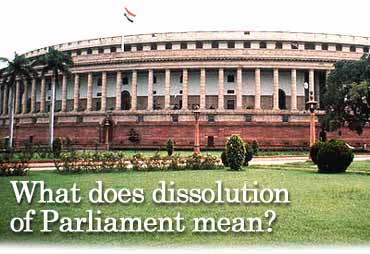 Prime Minister Atal Bihari Vajpayee has recommended to President A P J Abdul Kalam that Parliament be dissolved on February 6. What does this mean? rediff.com provides its readers with some insights into the process. The first in a series for Election 2004:   Who can dissolve Parliament?

When the term, dissolution of Parliament is used, it only means the Lok Sabha, the House of the People, the Lower House of Parliament.

Parliament comprises the President, Lok Sabha, and Rajya Sabha, the Council of States, the Upper House. The first and third have fixed terms of five and six years respectively, the Lok Sabha has a term of five years but can be dissolved earlier.

What is the effect of such a dissolution?

After the Lok Sabha is dissolved, elections are held to constitute the next Lok Sabha. The prerogative of announcing the dates and conducting the elections belongs to the Election Commission.

The Election Commission has a timetable on the basis of which elections are held after the Lok Sabha is dissolved.

What is the timeframe to hold elections?

As per the Constitution, not more than six months must lapse before two sessions of Parliament. This means that the Election Commission is bound to hold the elections such that a new government can take office within six months of the dissolution of the previous Lok Sabha.

Also, the Election Commission has to give the various parties time to file their nominations for India's 542 Lok Sabha constituencies, withdraw such candidature if they wish to, and campaign for the elections. This whole process takes about 45 days.

Has the present Lok Sabha completed its term?

The current 13th Lok Sabha has a few months more before it completes its term. But a new government has to take office in October 2004.

What is a vote-on-account? Why is it needed?

Thus, the Budget presented last year allows the present government the right to spend only till March 31, 2004.

When, for any reason, the government is unable to present a budget, a vote-on-account is presented and approved, which authorizes the government to continue its expenditure beyond March 31 for the next six months.

Since the expectation is that the current 13th Lok Sabha will be dissolved before the end of February so that elections may be held in April, the government has to pass a vote-on-account so that the government's financial activities may continue till the new government takes office.

Can I vote in the elections?

If you are an Indian citizen, 18 years or more on January 1, 2004 (or on a later date as fixed by the Election Commission), then you are eligible to vote. But to do so, you must inform your local electoral office and ensure that your name is on the electoral list that is with the Election Commission. You will also need an identity card and proof of residence (an Election Identity Card would be a great help). If your name is not on the voters' list, then on election day you will not be allowed to vote.