As Sri Lanka heads for yet another civil war, Tamil refugees have begun fleeing the fighting and taking shelter in Tamil Nadu.

Special Correspondent A Ganesh Nadar traveled to Mandapam to speak to the refugees and find out what is going on in northern Sri Lanka.

The second of a four-part series.

Part I: Lives in exile

The road leading from the Mandapam relief camp to National Highway 49 (connecting Rameswaram to Madurai) is the Mandapam bazaar. It is about 150 metres long, and boasts shops on either side. What makes it special is that the majority of shoppers aren't locals, but Sri Lankan Tamils.

N Ramakrishnan, 53, is a shopkeeper whose family hailed from Mudukulathur taluka in Ramanathapuram district. After studying till Class 7, he joined his father's hotel business. He has now rented out the hotel premises and runs a small shop. He says a lot of people from Yaazhpanam (Jaffna) came during the earlier influx of refugees. "They were rich, and STD booths did very well," he remembers. "They used to make a lot of international calls, and banks did a lot of currency exchange." 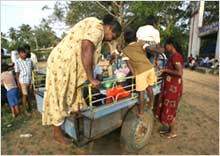 According to him, the present refugees are all from Triconamalee. "They are poor," he adds, "which is why all construction workers in this area are Sri Lankans."

Some refugees are looking for jobs as tractor drivers; others, as painters. But jobs are hard to find. The refugees mingle well with locals. The latter are fond of them as they spell more business. Although they mingle freely, marriages between locals and the refugees are rare.

As most refugees are coming over for the second time, they are familiar with the place. Many do business here, opening small restaurants, or selling vegetables and fish. They run small shops even inside the camp. Nobody objects. Ramakrishnan says, "Their boys are very smart and learn fast. There is no petty crime here. There has been a bicycle parked outside my shop since yesterday, but no one has touched it."

Most shopkeepers say while business in Rameswaram is via hiring boats for tourists, Mandapam survives on the refugees from northern Sri Lanka. The local economy thrives on them. Locals do not hesitate to rent out shops or space to the refugees to do business because, as one shopkeeper maintained, "They pay the rent on time." Grocery stores and vegetable vendors are happy with business over the last month as are local fishermen.

Every morning, men, women and children step out of the camp to shop. They crowd around vegetable vendors, bargain with fishermen and jostle around the grocery shop. They do not look like refugees. The bazaar looks like any other along the long coast of Tamil Nadu.

And, as they call to each other in their singsong manner, you wonder about the bazaar they left back home.

A Ganesh Nadar in Mandapam
SHARE THIS STORY
Print this article