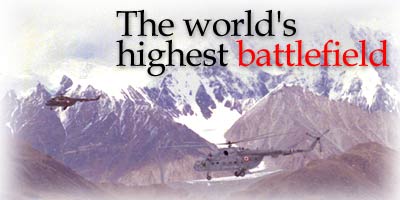 After a gap of six years, India and Pakistan on Thursday resumed defence secretary-level talks focused on proposals for military de-escalation, including troop reduction at the Siachen glacier.

rediff.com presents a primer on the world's highest battlefield.

Siachen is high up in the Karakoram Range, (actually between Saltoro Ridge and Karakoram Range), which stretches across Ladakh and Pakistan-occupied Kashmir.

The biggest glacier outside the polar regions, Siachen is 78 kilometres long.

The glacier, and Karakoram, is seen as the watershed that separates Central Asia, South Asia, and East Asia.

Why is it famous?

Infamous would be a better word. Since 1984, India and Pakistan have been locked in a bitter battle over the control of Siachen. Both claim territorial rights over it.

At 6,300 meters (20,700 feet), Siachen has become the world's highest battlefield, where the bigger enemy is the bitter cold. Temperatures hover at 30° Celsius and often touch 60° C.

How did the battle break out?

Blame it on the lack of diplomatic foresight. When India and Pakistan settled the Line of Control that divides Jammu and Kashmir between the two countries, they stopped the LoC at a point known as NJ9842. This is the base of the glacier.

The belief then was that the glacier and mountains are so high and so inhospitable, it was pointless to demarcate the border. The Simla Agreement said the LoC is up to Point NJ9842 and would continue "thence north".

In the 1980s, some mountaineers showed an interest in climbing the glacier and this part of the Karakoram.

Pakistan invited the climbers to ascend Siachen, which would imply that the glacier was part of PoK.

But India got wind of the plan. The Indian Army quickly assembled a unit, which was airdropped by the Indian Air Force in April 1984 atop the glacier. Since then, the Indian tricolour has flown over Siachen.

An upset and agitated Pakistan launched a fierce attack to dislodge the Indian troops. The battles have been bloody and painful with many deaths (more from the cold than from bullets).

Till date, no one knows the exact toll or even the exact cost of holding positions (both countries are extremely secretive when it comes to giving out military details), but the situation remains unchanged.

Why is this glacier so important?

For India, control of Siachen is of key strategic importance, allowing the Indian Army to dominate the heights and overlook the Pakistan-China highway.

Pakistan, believing that Siachen should be part of its territory, is also keen to control the heights for the very same reason, besides of course linking it to the overall dispute over Kashmir.

Can't this be resolved through talks?

The two countries have talked in the past but to little avail. Talks were held in 1998 and one hoped some progress would be made, but then Kargil put everything back on square one. But one can also point to the fact that India-Pakistan relations all through the 1980s and 1990s have been nothing to boast about.

If the two countries don't trust each other, where is the question of resolving such a strategically important glacier?

Will the current talks make a difference?

The people who must be most keen would be the army personnel of both countries who have to man the inhospitable heights. It would be prudent not to expect too much, too soon. It will take time and many rounds before we actually start seeing some progress, if at all.

The difference now is the improved atmosphere between India and Pakistan, and a changed world after 9/11.