Sign in  |  Create a Rediffmail account
Rediff.com  » Business » 'India has tremendous potential to be a global player'

'India has tremendous potential to be a global player' 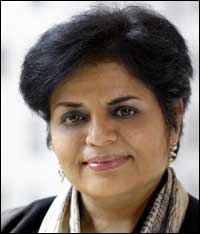 India has gained worldwide attention as one of the fastest growing markets and a respected, responsible democracy. In recognition of the country's emergence as the next big business market, Asia Society -- an organisation that educates Americans about Asia -- has organised a conference in Mumbai on March 18-20.

To be inaugurated by Prime Minister Manmohan Singh, the conference will include business and government leaders to explore Asia's economic future in the context of India's role as a growing economy. The participants include Montek Singh Ahluwalia, Deputy Chairman, Planning Commission, Frank Wisner, former US ambassador to India, Biocon's Kiran Mazumdar-Shaw, Ambassador Richard Holbrooke, Ratan Tata among many other delegates from China, Japan, Pakistan and Singapore.