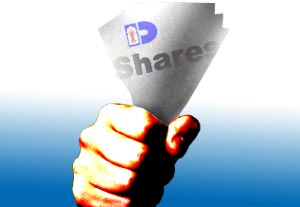 can safely name at least a dozen people who have all asked me the same question in the last few weeks: do you plan to invest in the Dena Bank issue?

The Hindi film industry charm of Juhi Chawla Mehta in the Bank's media campaign seems to have worked.

In case you were not aware, Dena Bank has just come out with a new issue of shares.

Dena Bank came out with an IPO (initial public offering -- the first time that a company offers shares to the general public and to be subsequently listed on a stock exchange), a few years ago.

The logical question is, why again?

The bank wants the money for a few reasons:

It wants to have a strong presence in the retail banking industry, which is growing at a phenomenal rate of 25% to 30% a year.

To shed off its image of shoddy customer service (so patently associated with public sector banks!), and get up close and personal with its client base, Dena Bank has come with the concept of Retail Finmart.

This is a one-stop shop for the financial needs of its retail customers. It is rapidly converting its existing branches into 'retail finmarts', depending on the branch space and location.

Over the next couple of years, the bank plans to open 150 retail finmarts across the country.

CAR is nothing but the measure of a bank's capital. Capital includes all the bank's assets and cash. This capital is expressed as a percentage of a bank's risk weighted credit exposures.

As you know, banks constantly give loans to individuals and companies. So there is always a risk when you lend money because you are not sure if the borrower will eventually repay it all.

So a CAR measures how much capital exists with relation to the money being borrowed.

This ratio is used to protect depositors and promote the stability and efficiency of banking systems around the world.

A higher CAR takes care of a bank's expanding credit exposure. It means the bank is more protected against the risk of defaulters.

~ Hey, I have been a good bank!
In 2001, Dena Bank incurred a loss of Rs 266.12 crore (Rs 2.66 billion) mainly on account of money spent on voluntary retirement schemes (VRS) and provisioning for a huge chunk of Non Performing Assets (NPAs).

An NPA refers to a borrowing where the chances of it being repaid are doubtful and the money could be lost.

This happened because of the bank's overexposure of credit (giving substantial loans) to sectors like engineering, textiles and steel. With the Indian economy witnessing an upturn in business cycles in the last couple of years, borrowers are making a beeline to repay debts to Dena Bank.

Incidentally, Centurion Bank is another bank to have undergone a similar turnaround this year.

Dena Banks deposits and gross advances (loans) have also kept pace with the rise in net profits. Both grew at a Compounded Annual Growth Rate (CAGR) of 9.24% and 8.2% over the last five years.

Earnings per share (EPS) is arrived at by taking the banks net profits and dividing it by the total number of shares.

Price to earnings ratio is the market price of the share (here, we take the issue price of Rs 27) divided by the EPS.

The figure provides investors with an idea of the actual cost for the earning power of any given company.

A P/E ratio of 2.5 means that the company has Rs 1 of annual per share earnings for every Rs 2.5 in share price.

Book value is what would be left over for shareholders if the company were sold and all its loans were paid off.

It is calculated by subtracting total liabilities (money owed) from total assets (all that it owns) and dividing the result by the total number of shares.

In technical terms, BV is the accounting value of a firm. So a BV of Rs 39 would indicate what each share owner would get at this point in time if the company liquidated.

By being compared to the company's market value, the BV can indicate whether a stock is under or overpriced.

The price-to-book ratio (P/B ratio) is used to compare a stock's market value to its book value. It is calculated by dividing the current closing price of the stock by the latest quarter's book value.

The P/B ratio of less than one seems to be in favour of the stock.

Finance Minister P Chidambaram and the Reserve Bank of India (RBI), are all eagerly looking toward a dramatic change in the structure and ownership of banks.

Mergers (two banks merging to become one) and acquisitions (bigger banks buying off the smaller ones), are going to change the banking landscape.

The government now has a 70.99% stake in the bank. With this second issue of shares, the government's hold will drop to 51.19%.

This could make it a ripe target for a takeover in the future. Even if it does not, the bank by itself should do well.

You will be able to buy the shares at Rs 27. Each share will have a face value of Rs 10 (base price of the share as fixed by the bank) with a premium of Rs 17.

In fact, on listing itself, the price could go up. Investors, if they want to sell them, could make a profit of around 20% to 25%.

Taking into account all the above factors, you could end up getting returns in the range of 60% to 80% if you are willing to hold on for at least two years.

Next: How to invest in an IPO