Greed = Loss at the stock market 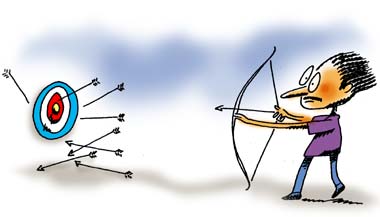 ou win some. You lose a lot.

This epigram is the perfect explanation for my pitiful experience as a day trader.

A day after the horrific earthquake traumatised Gujarat, I enter an air-conditioned room with a computer on which buy/ sell orders [for shares] are fed. They are then sent to a broker's server and from there on to the stock exchange's server where the transaction is completed.

This is referred to as a sub-broker's trading terminal.

My life, since that ill-fated day, has never been the same.

Those were the heady days when day traders either made a killing or got killed in the now much-maligned K-10 stocks.

Before I start my saga, let me explain some of the terms I will be using.

Day traders are those who buy/ sell stocks during the day and square up their position by the end of the day. Which means they either book a profit or a loss.

This breed traditionally likes a volatile market; it helps them rake in the moolah. And to say the markets were volatile those days would be an understatement.

Buying into any of the K-10 stocks in the morning and selling them by evening (with the sole intention of making a huge profit) was how day traders like me evolved and finally perished.

Those who buy first and sell later are said to go long on that particular stock. They expect the share price to rise. So they buy shares at a low rate, hope the price will rise and sell when it does.

Those who sell first (without owning the shares) and buy later are said to go short on that stock. They expect the share price to fall. So they sell at the current rate, expect the price to fall, and buy them again at the lower rate.

Now, that we have the jargon clear, let's flashback to my very first day as a day trader.

I went short on (sold) five shares of Infosys when it was worth some Rs 6,000, hoping to cover (buy) them at a lower price by the time the market closed for trading at 3.30 pm. I did this after a pink daily (a business newspaper) recommended going short on Infosys at that particular level.

Back then, the market regulator, the Securities and Exchange Board of India, was rather smug and complacent; most pink journals (business newspapers and magazines) offered their own recommendations on what to buy and what to sell.

After an initial nervousness following the earthquake, the market resumed its upward journey catching short sellers like me on the wrong foot. The stock closed higher than what I had sold it for.

Never one to accept defeat -- and to proclaim my fortitude to my peers -- I decided to wait until Friday to close my position (decide what I finally wanted to do).

Here I would like to remind you, dear reader, that you did not have settle your trade at the end of the week (pay for what you bought and take money for what you sold). All you had to do was pay a small amount (a margin) and you could settle it the next week. I did this hoping the price would fall the next week. This was called badla financing.

Finally, though, I reluctantly booked my losses (and there were many more that followed) on Friday as the stock did not come under selling pressure (nobody was interested in selling so the price remained high).

My first debit came to around Rs 1,200 (5 shares x the difference of Rs 240 at which I bought those shares to cover my position).

I sold the shares at around Rs 6,000 and instead of buying them later at a lower rate (I had betted on the rates falling), I ended up buying them at a higher rate.

Thankfully, at the cost of snubbing my own ego, I'd decided not to go for badla financing. The stock climbed further the following week and my losses would also have climbed accordingly.

The sins of a day trader

Smarting from my first loss and determined to make up for it (the most unforgiving sin I ever committed in retrospect), I decided to go long on GTL and HFCL the next week at a very high price.

As luck would have it, the prices of both the stocks did increase and I would have definitely made up for my losses if I had the sanity to sell them. But then I remembered Gordon Gekko and his dictum: Greed is good. In fact, I went a step further and declared: Greed is God (another sin that a day trader should never commit).

No points for guessing right. I lost again. Lost in the sense that the prices fell down from their stratospheric levels and I had to sell them at a small profit (remember a bird in the hand is worth two in the bush; likewise book your profits when you see them. Don't be greedy).

I -- and many like me -- failed to read the coming correction.

I made a neat profit of some Rs 700 after paying brokerage and service tax: my first profit after the initial loss. My happiness knew no bounds that day and my chest grew an inch wider.

Thenceforth, I learned a lot of lessons in day trading from my peers who'd visit the same trading terminal, but never put them into practice. I went on making one mistake after another (always thinking that I knew better), kept losing money week after week until 9/11 happened (I had also lost a fortune following the Ketan Parekh scam, but that's another story).

Not that I made money after that devastating attack on the World Trade Centre.

What I did was to make up was my mind to finally quit day trading, but not before my losses had reached almost Rs 2,00,000 (I have preserved my final debit bill like a souvenir). Then, I knew I had only one option left. It was a wise one; I decided to put an end to my crazy punting ways.

This is what happened...

A few days before 9/11, I had gone short on (an addiction I picked from my sub-broker, who went short on any stock that took his fancy) Aurobindo Pharma, Infosys (yet again), Moser Baer, Digital Equipment (now Digital Globalsoft), Ranbaxy and what have you...

I had made (notionally) a tremendous profit on Moser Baer itself, on which I had gone Rs 275 short. The price now was Rs 240. In the next few days, MBIL's market price plummeted to Rs 179.80 but, once again, I was possessed by Gordon Gekko and did not cover my position by buying the stock.

As my misfortune would have it -- though I think it was a blessing in disguise -- the stock started rising, as quickly as it had plummeted. I ended up covering my position at a marginal loss.

Even though I made profit on other stocks that I'd gone short on, the entire episode diminished my appetite for day trading.

Also, realisation had sunk in -- a day trader always wins some and loses a lot. I know of many punters who'd agree with me.

PS: Not satisfied with my own losses in Silverline Technologies -- of which I bought 50 shares at Rs 380 -- I convinced my aunt to buy 50 more at Rs 185. I told her what a value buy it was at that level and promised her that she would be soon selling it at double the price. Even as I write this piece the stock's quoting at Rs 4.05. Not to mention the fact that it is still languishing in my portfolio!

DON'T MISS!
 Make money with shares
 What's in a share? Money!
 Sensex? What's that?
 The Sensex is bullish. What does this mean?