What makes a Champion immortal

No, we're not going to discuss the European Grand Prix, because to keep harping about a race where Michael Schumacher walloped Fernando Alonso is just cruel. Yes, Ferrari is back and gunning for both Championships. But we've chatted about that already and there's really no point in repeating ourselves and jinxing Sunday's Spanish Grand Prix at Barcelona.

Below: Michael Schumacher celebrates as Fernando Alonso looks on dejectedly at the podium after the European Grand Prix 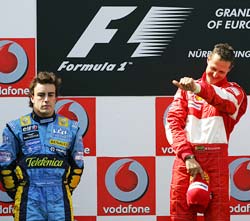 But, this being a column about the fabulous European Grand Prix, we must mention the race. Not the race itself, however, but the events thereafter, the podium presentation that day being a telltale Formula One forecast in itself.

The race was grand, and three men, two in red livery, one wearing blue, got out of their cars. The 37-year-old German leaped out, stood exultantly on top of his car, and clambered onto his giant technical director. A couple of seconds later, the younger man in red overalls, 25, also joined the ecstatic pile-up. As they rightfully war-whooped their way to the podium, the second place man disconsolately stepped on. As the presentation ceremony continued, it was but natural that the scarlets would dominate proceedings, but it was startling just how surly the 24-year-old runner-up looked.

Obviously, losing hurts. But when you're on a podium, being showered by champagne, you get into the spirit of things and let your hair down. Alonso stood there, shoulders slumped and scowling like he'd just been caught cheating in a Playstation duel with Juan Pablo Montoya. Heck, even the mousy McLaren genius Kimi Raikkonen grins and bears it.

Fernando's podium gravitas is ominous cause for concern indeed, for while none can cast aspersions on the prodigious defending champion's driving credentials, the Spaniard's depressed eyebrows signal more than just a bitter loser. Championships can be won or lost, but the true greats are the immortal Champions, the special men who outgrow their astonishing accomplishments to take their legacy far beyond just the car they drove, and the victory-count. Despite the technicalities of the thing, it takes more than a Championship to make a real Champ. Alonso has the racing finesse to be hailed among the finest, but he needs to stay spirited.

Formula One is on the brink of a crucial transition. The winningest driver in the history of the sport is (eventually, if not just yet) on his way out, and it shall be the end of an era without parallel. At this juncture, motorsport needs not just faces with incredible talent, but drivers with immense character and flavour. An adequate champion with a precise drive isn't the call of the hour. We need something mega. We need James Hunt. 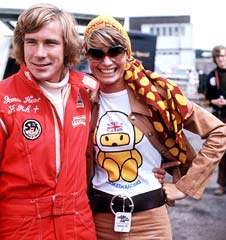 1976 world champion Hunt painted the paddocks red as he brought style, sensuality and studliness to F1. A playboy like no other, Hunt - sporting a 'Sex  Breakfast Of Champions' badge on his overalls - consistently defied convention. Entering the sport late, as a result of being dragged to a motor race at 18, Hunt threw himself into it with characteristic fervour and entered Formula One having proudly earned the nickname 'Hunt the Shunt' - a tag justified by a 1970 race where an accident took out Hunt and Dave Morgan, and, blaming the latter, Hunt decided to get out of the car and whack him.

Yet all was not sex and violence with the charismatic superstar. Showing up for the most black-tie of dos barefoot and in jeans, Hunt often took his Alsatian, Oscar  after whom he named his discotheque in Spain  out to dinner. Often criticised for not taking the sport seriously enough, James kept the wins coming even as his response to questions regarding to casual marijuana usage was limited to a broad wink.

After racing for the mildly eccentric exhibitionist millionaire Lord Alexander Hesketh (who entered F1 instead of F2 because the difference in cost seemed 'marginal') and driving a Hesketh without any sponsor-markings (save a teddy-bear badge), Hunt had it written into his later McLaren contract that he didn't have to wear a suit or go to sponsor days. And the budgerigar-breeding rebel was even spotted buying John Player's Special cigarettes while still in his team's Marlboro jacket.

After James retired at the peak of his popularity, he turned into a hilarious and acerbic commentator, in the process making more fans tune into the sport than usual. And while Hunt was an absolute wildcard, an unpredictable character we aren't likely to see again - even as Eddie Irvine tried to live up to the playboy legacy -- we've always had memorable champions.

Formula One will never completely get over the tragic death of the magnificent Ayrton Senna, the handsome Brazilian driver who raced to win, at all costs. With him competed Alain Prost, the precise 'Professor' with the most flawless of drives. While the two could not be more different, their see-saw rivalry over the years (Prost won 85, 86, 89 and 93, while Senna took the 88, 90 and 91 titles) took the sport to a new level as they fought bitterly on and off the field, even when driving for the same team.

Damon Hill came from bike racing, was outspoken and suave, and racing far beyond his glory days, became known more for his style than his on-track manoeuvring. Jacques Villeneuve, the man with the frequently-recoloured hair remains one of the most fun characters in Formula One, despite having not driven a truly competitive car in ages. Mika Hakkinen was possibly the fastest driver of his time, and the flying Finn didn't just make winning look easy, but thrived on the last-minute overtakes and the riskiest strategies in the business.

Schumacher it remains too early to nutshell, because his legacy is far from over. But over the years, he's been anything but bland. He started off a precocious winner, honed himself into one of the finest talents ever, defiantly overdrove himself to disqualification, left a fast team for a then underwhelming but more historic one, built it from the ground up, beamed with pride as he completely dominated the sport, and now seems to relish saying 'game on.'

Which is why, with 13 races to go and a 13-point difference in the Driver's Championship, the 13-year age gap between Schumi and Alonso seems insignificant. Alonso might be up ahead, but if he continues to glower instead of grin, the title defence will get progressively tougher. Last year, he had nothing to lose: had Michael won, it'd have been just another Michael triumph, not an Alonso defeat. This year, the German is rising to the challenge and pushing Fernando hard, and the pressure is visible on the Renault driver. This year, the world champion in the fastest car on the grid, he has everything to lose.

Loosen up, Fernando. Take a leaf out of your bosses' book -- how often can one recommend that? -- and see how colourful and charming Flavio Briatore is. Relax and enjoy the thrill of the increasingly tight competition, while giving it all you've got. Remember that this is still basically a bunch of boys trying to outrace each other, and that you need to enjoy every second of it. Hell, you're one of the youngest.