Manchester United striker Rooney was included despite being a major doubt for the finals with a broken foot. 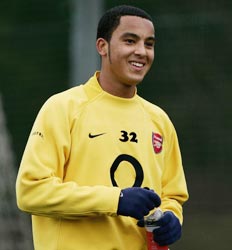 Eriksson, who said last week it could take a miracle for the inspirational 20-year-old to play in Germany, is still hoping Rooney can take some part in the finals.

"I would be absolutely crazy if I didn't pick Wayne Rooney when we still think it's a possibility that he will play in the World Cup, I could never justify that," Eriksson told reporters.

The 17-year-old Walcott has yet to even play for Arsenal's first team since joining the club in January from Southampton for an initial five million pounds ($9.33 million).

However, with serious concerns over Rooney and his strike partner Michael Owen, who missed Newcastle's season finale against Chelsea on Sunday following a setback in his comeback from a broken foot, Eriksson has opted to make Walcott England's youngest ever player.

Rooney won his first full cap aged 17 years and 111 days, and presuming Walcott, whose birthday was in March, plays in either of the warm-up matches against Hungary or Jamaica he would beat that record.

"It's a big gamble, I know it's a gamble, but it's a nice one I think," Eriksson told a press conference of his decision to include Walcott in front of established Premier League strikers Jermain Defoe and Darren Bent.

"The pace he has is incredible, so out of the 23 players, why not have one gamble. He's very excited and I can't wait to start working with him."

Both Defoe and Bent, who scored 18 league goals for Charlton Athletic this season, were surprisingly omitted as Eriksson named just four frontmen in his squad.

Eriksson, who will be replaced by Steve McClaren after the finals in Germany, showed his faith in two young wingers, with uncapped Tottenham teenager Aaron Lennon and Middlesbrough's Stewart Downing both on the list.

"Downing has a very good left foot and Lennon is a good crosser, he beats people," Eriksson said. "I'm excited to take those players and I'm looking forward to it very much."

There was no place for Lennon's Spurs team mate Ledley King, who is recovering from a broken bone in his foot, or Chelsea's Shaun Wright-Phillips.

"It's very sad to leave people out, but [King] is injured at the moment, he can't train and if you're talking about centre halves we're very well covered," Eriksson said.

Eriksson stayed loyal to Arsenal defender Sol Campbell, who suffered a dip in form this season, and his Gunners team mate Ashley Cole, who has only just returned from a series of lengthy injury lay-offs.

FIFA rules allow Eriksson to change an injured player from his squad up to 24 hours before kick off in their first Group B match, against Paraguay on June 10.

Kanhaiya Kumar, darling of the Left, to join Congress