'Wild' Narain back on track

India's rookie F1 driver Narain Karthikeyan believes that his week-long stress relieving session in the wilds ahead of the Canadian Grand Prix will bolster Team Jordan's prospects of collecting some points at the Gilles Villeneuve Circuit. 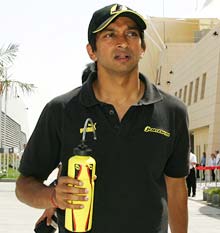 "I know that the circuit has been quite successful in the past for the team where they scored their first ever Formula One World Championship points in their history. It is also kind of a home race for the team with the team owner being from Canada. The serious business will begin tomorrow (Saturday) on the track," Karthikeyan said.

The 28-year-old, the first-ever Indian in F1 Circuit, said the Canadian circuit was everyone's favourite but his team concentrated on being relaxed for the eighth race of the season in Montreal.

"I landed Sunday and we travelled two hours north east from Montreal at Lake Sacacomie (Lanaudiere) with my teammate Tiago Monteiro and trainer Gerard Gray.

"It was very wild up there. A great place for wild animals. We even saw black bears and beavers. Don't speak about mosquitoes to Tiago Monteiro. My skin may be more resistant than his. We used the session not so much to get fitter than to be relaxed.

"I even discovered water Kanoe which I was not familiar with. I'd never done it before and I can still fill it in my shoulders. This short week was rather used as a stress reliever session than as a body building. Also we watched carefully our diet," he said.

Karthikeyan is on his first ever visit here for the 37th edition of the Canadian Grand Prix and 27th GP ever held in this French speaking city.

"I have now completed a total of 7,000 kilometers behind the wheel of the Jordan Grand Prix car including the 3,100 kilometers of testing.

"I have never driven on the North American circuits. Everyone in Formula One seems to love the Canadian Grand Prix. My team is no exception. I have been running twice today around the track to get familiar with the curves," said Karthikeyan about this Sunday's midseason GP which is also a kind of home race for his team.

Karthikeyan was quite impressed with the track, which he said, had similarities to the Australian track, one of his favourites.

"My trainer Gerard took me around. After all, there is something special about the location of the Circuit Gilles Villeneuve. I like the way the track snakes around Montreal's Olympic Rowing Lake on an island in the St Lawrence Seaway.

The characteristics seem similar to Australia's track which I liked a lot," he said.

Karthikeyan said the weather factor was quite important on this track.

"The Montreal circuit is always a tough one on tyre heat durability because of the long straights and low number of corners. I was surprised at the very long straight that runs from the hairpin to the last chicane.

"You need a car with high-speed poise and good balance, and a high top speed so that you can defend yourself or try to overtake other drivers along the straight.

"For sure, here, you do a lot of running close to the concrete walls on the back section of the circuit, so you need very good balance to give you the confidence to get the lap time right! The track has been completely resurfaced since last year," he said.

"I also spent last week testing at Silverstone preparing for the races ahead and I'm expecting a competitive couple of weeks in Canada and the US," he added.

Agnes Carlier
Source: PTI© Copyright 2022 PTI. All rights reserved. Republication or redistribution of PTI content, including by framing or similar means, is expressly prohibited without the prior written consent.
COMMENT
Print this article